Two films at this year’s L.A. Film Festival explore two sides of veterans’ experiences returning home after fighting overseas. The first, 11:55, considers the difficulties of limited opportunities at home in a gang take on a classic western. The second, Blood Stripe, features a female lead and explores the effects of PTSD on returning vets. Reviews of both below. 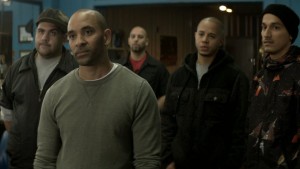 Ari Issler and Ben Snyder’s new film, 11:55, is a fiction film that plays, unfortunately, like a documentary, chronicling the plight of far too many returning Iraq and Afghanistan war veterans. In it, Nelson (Victor Almanzar) returns home to his Dominican community in the northeast (but it could really be anywhere). While his family is excited to have him back, not all of his friends are as thrilled. nelson left for the Marines under “inauspicious” circumstances. He accidentally shot and killed a rival gang member was forced to flee his community. That dead gang member’s brother, Nicky Quinn (Mike Carlsen), now wants to settle the score. The film follows Nelson as he roams the neighborhood over the course of a single night in search of either people to stand with him or another way out.

The setting is one of the strongest features in 11:55. The derelict neighborhood feels like a wild west ghost town. In fact, the filmmakers intended the film to be a re-tooling of the old westerns, particularly the showdown motif. When his uncle Maurice (David Zayas) asks him about job prospects, Nelson admits that he has none and that his only marketable skill is heavy artillery operation. Maurice asks Nelson to come work for him and sell drugs, but Nelson politely refuses the offer. When his girlfriend Livvy (Shirley Rumierk) learns of the danger, she tries to convince Nelson that they should move to Boston, but Nelson knows they’ll never be safe unless he stares this threat down. 11:55 does just as good a job as any film in establishing the hopelessness and lack of opportunities that so many vets experience when they return to lower income communities.

Without going into specifics, another strength of 11:55 is that it doesn’t fall into the same traps as other revenge and/or gang narratives do. The dialogue and interactions feel completely realistic, due, in large part, to outstanding performances from everyone involved. Nelson refuses to be a victim, neither of the community to which he has returned nor to his enemy’s desire for revenge. There is something bold and inspirational in watching Nelson walk the only path he should walk. 11:55 is a short film (80 mins.) that feels like it ends all too soon. It’s one of the few films of the genre that left me wanting to see what the next chapter would be in Nelson’s life. 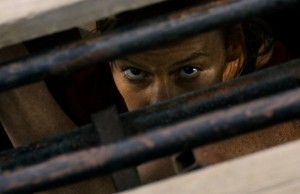 Though set in the wilds of Minnesota and with a female vet as the lead, Blood Stripe is just as brooding and troublesome as 11:55. In it Kate Nowlin plays a character simply known as “our sergeant.” No parade or fanfare welcomes her back to the United States. She waits for her sister-in-law to pick her up at the airport. Her husband waits on the stoop of their house smoking a cigarette. Tone deaf, he gives her pink lingerie and has sex with her from behind, fulfilling his fantasy, but becoming something of a nightmare for our sergeant. She gets a job on a road construction crew, but there’s nothing there for her and she flees, returning to a beautiful lakeside campground, where she promptly takes a job helping out the caretaker. Our sergeant suffers from PTSD, seeing, hearing, and feeling threats around every corner. When Church members show up on a retreat, the pastor tries to get through to her and fails. The film ends on an ambiguous note, which is to say the only way it can.

The blood stripe refers to the red line along the out seam of a Marine’s dress garb. Here, it also refers to the PTSD that ties vets to their past experiences of combat. Film might be the perfect medium to portray the realities of PTSD victims, and Blood Stripe does a great job with editing and sound design to show the ways in which traumatic experiences can break into everyday experiences. That these can often be triggered by well-meaning family and friends is a strong point in the film.

Writer/director Remy Auberjonois, referenced Martha Marcy Mae Marlene as an influence, and the two films certainly share a similar ominous tone without ever breaking into explicit acts of violence. Nowlin is never not in control of her performance, and she owns every scene she’s in. The cinematography by Radium Cheug is consistently gorgeous, but given the film’s setting, he had plenty to work with.

Neither film has obtained distribution. We’ll re-post about them as new of that emerges.