Ryan and Benjamin review and discuss one of the year’s most unique films, David Lowery’s A Ghost Story.

On the surface, A Ghost Story is a rather simple film. Casey Affleck plays C and Rooney Mara plays M. They live in a quaint house. Tragedy strikes and C is killed in a car wreck. He immediately reappears as a white-sheet-clad ghost, who “haunts” their house. He simply spies on M’s comings and goings, occasionally making a book or two fall off a shelf. Time passes and M moves, but C is tied to the house and decades pass. To say more about what happens during this time would be to spoil some of the more breathtaking moments you’ll experience in the cinema this year.

RP: A Ghost Story is about a ghost. But it’s also about the life of a relationship, a house, a piece of land, time, grief, love, and longing. In short, it’s about life and death. And as such, it might be the most spiritual and theological film of the year. Did it land with you in that way?

BG: Absolutely – although, as the film wore on, it started to feel less about a relationship between people and more about a relationship with place, about the sacredness we instill into a place. It’s as easily a metaphor for a death as it is a break up, for the movement from one stage of life as it is the very ephemeral nature of time as a concept. The spirituality was remarkable, both incredible rich and life affirming while also desolate in its, I think I’d say, nihilism.

RP: We can’t go much further in a conversation about this film without talking about the sheet. I mean in the images it can look absurd. But it absolutely works. What did you think?

BG: I thought it was extremely effective. On the surface, it shouldn’t work: it’s a silly trope that hasn’t had legs since Beatlejuice, and, even then, it was the butt of the joke. But here, it commands presence. The subtlety in the movements, the shadows on the sheet, and even the occasional “facial” expressions…all of it really worked for me to convey an ethereal presence. 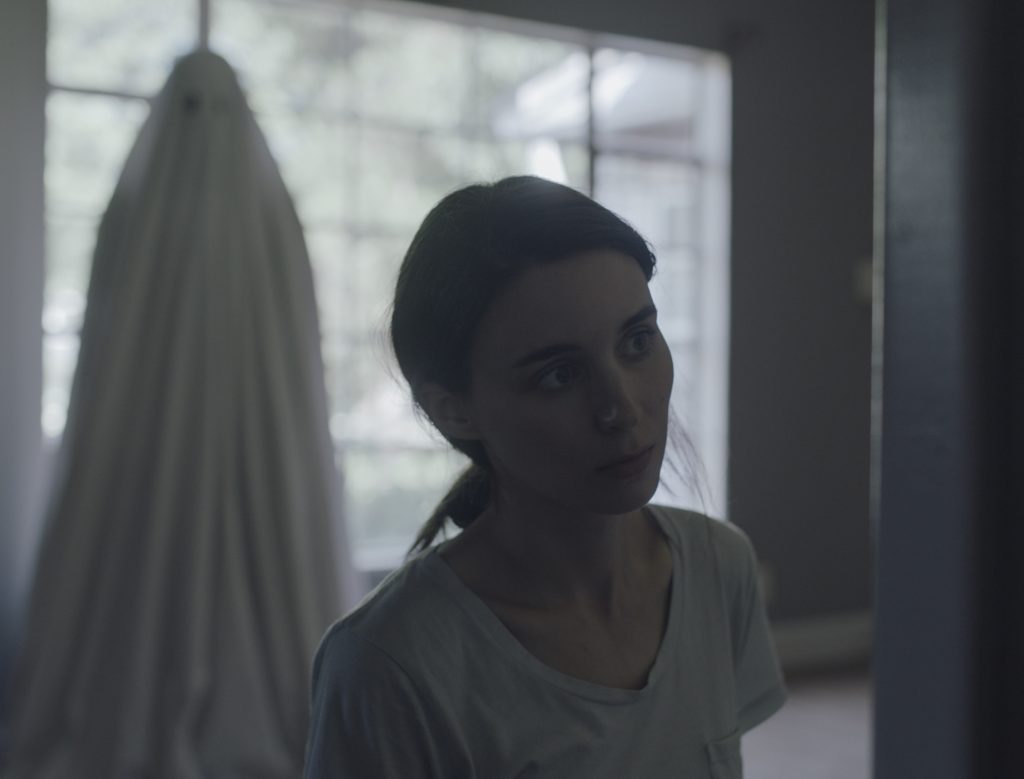 RP: You’re right. It’s so much of what is the (perhaps) technical perfection of the film. I love the sparse dialogue…it’s almost a silent film (well…there was never such a thing as silent films). And A Ghost Story excels, as you’ve pointed out, with its soundtrack, its score, and its audio effects. What struck you about these?

BG: I keep thinking about the scene with Will Oldham’s character, talking about legacy and the uncaring march of time. It was inspired to have a musician (Bonnie “Prince” Billie) deliver a diatribe about how no matter what you create, no matter how beautiful and brilliant, will eventually be lost to time. Music moves us across cultures, across experience, it is something we can share without ever knowing what we’re really sharing with either the artist or each other – only an intuitive experience of beauty. With the score, the director manages to convey every shift in C’s emotional contemplation from the terrified to the loving. Juxtaposing this truly inspired use of his soundtrack with the hopelessness that even our greatest musical accomplishments as a species will face against time was stunning.

RP: I love how the film is about nostalgia, but not just thematically. Aesthetically, every shot feels like it could be a photo in an old family album.

BG: Oh absolutely. The wide shots of the house, a beautiful broken-in country home, with the single dead tree nested between the full, southern oaks (?), was beautiful. Every scene looked truly lived in – in whatever context we saw, whether as M and C’s home, the family’s, the young adults’, and even the office building. Each were fully realized as they became more and more alien to C.

RP: What did you think about Mara’s pie-eating scene? I thought it was one of the more harrowing sequences we will see on film this year.

BG: Easily one of the most effective portrayals of grief I’ve ever seen. There’s an anxious emptiness to grief where you simply don’t know what do with yourself, and having her mindlessly devour the pie, breathless in her action, was, in a real sense, breath-taking. It was painful to watch because you could sense the emptiness of the act. 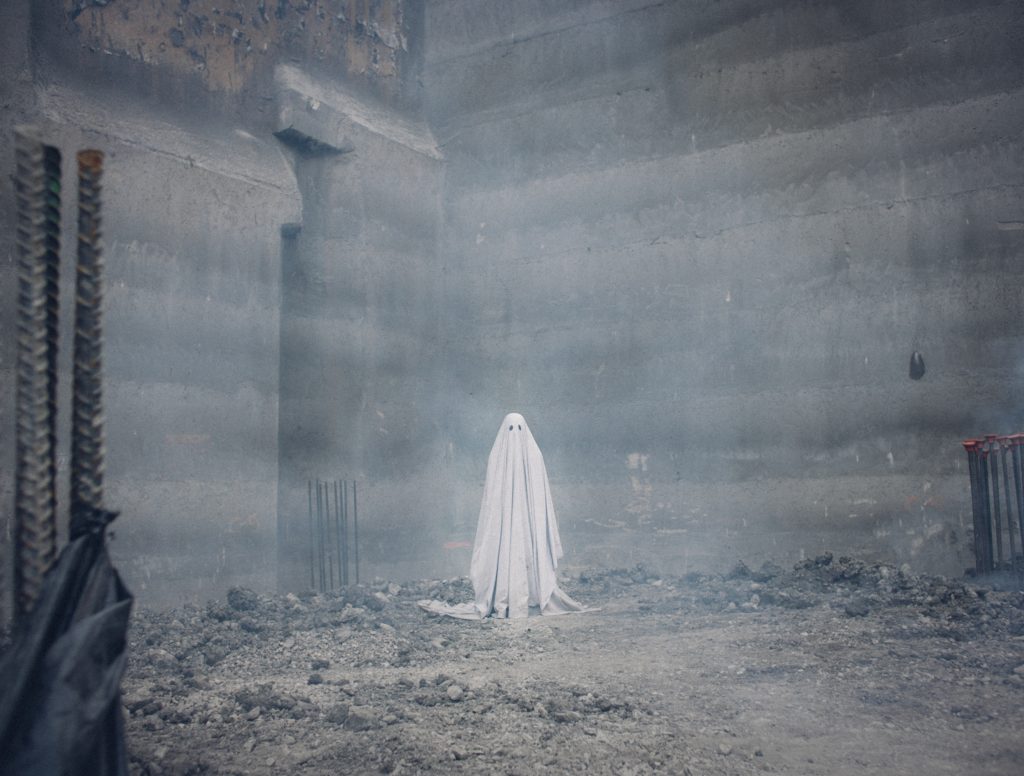 RP: Finally, when the film folds back in on itself…when it goes back in time and C haunts the land on which his house will eventually be built…that was a moment that took my breath away. When we see that C is actually responsible for…or his ghost is the source of…the sounds that wake them in the middle of the night?? I’m still thinking about this. How our own longings, desires, insecurities, and stubbornness haunt our lived experiences here and now.

BG: There is so much here that goes beyond the scope of this article – I have also been chewing on it, wondering what the director was wanting to say about either the cyclical nature of the afterlife or about how deeply we belong to place. It was an unexpected twist that really managed to make an already bountiful movie all the more fascinating. I am especially grateful he used this to have C really reflect on death. Without spoiling it, having him sit there motionless in the field as it played out was really moving.

A Ghost Story (92 minutes) is rated R…for no apparent reason. It releases in New York and Los Angeles on Friday, July 7th, and rolls out wider on July 14th. If you can find it, go see it.