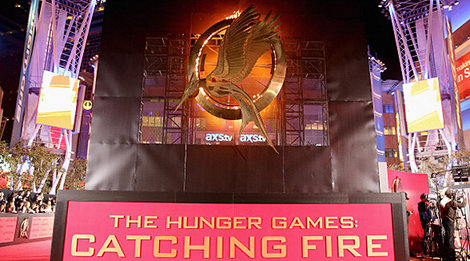 Pop Theology contributor Steve Sudeth attended Monday night’s red carpet premier of the new Hunger Games film, Catching Fire. Read on for his review of the night. Check back later this week for our review of the film.

LA Live felt like another stop on the victory tour of Katniss and Peta after their triumph in the 74th annual Hunger Games. Complete with large screens carrying their likeness, emblazoned emblems of their victory and an international live webcast, cast members of Lionsgate’s The Hunger Games: Catching Fire were welcomed to downtown Los Angeles as conquering heroes.

Monday night’s red carpet was everything you expected it to be; screaming fans, an endless stream of cameras, the biggest names of young Hollywood (OMG is the Jaden and Willow Smith!?!?!?!)  and a spirituality blogger looking for something meaningful in the midst of a celebrity rite of passage.

Some of the questions being asked were a bit unsettling:

“What would be your weapon of choice?”

“Which celebrity would you kill first if you were in the Hunger Games?”

“Do you think you would survive the first night of the Games?”

Though there is quite a bit of violence, that’s not what makes the Hunger Games saga so compelling. We are drawn to the emerging heroine of Katniss Everdeen. We want to believe that a hero can rise up in the face of insurmountable corruption and overthrow an oppressive institution. We celebrate not only the victory of the heroes in the story but the victory of what is right and virtuous.

Once the red carpet festivities began, it became obvious that the stars of the film were not going to make it to our section of press row, partly because they had already done the media circuit but mostly because they wanted to greet the fans that had been camped out to see them. I didn’t have high hopes about getting an in-depth interview with anyone, but a moment with Lenny Kravitz (Cinna) would have been pretty cool. I still had the opportunity to ask several of the supporting cast members who a hero in their life is and what are those heroes’ most important qualities.

Nelson Ascensio, who plays Flavius, gave the most popular answer of the night, his mom. “She is someone who as endured a lot of themes that are present in this film. Her greatest quality is her sense of humor, in spite of any challenge she can still get something funny out of it.” Maria Howell (Seeder) also looks to her mom as her hero because “she  has the capacity to love, she has 6 children and makes each child feel special.”

Each of the actors that I spoke with mentioned their parents as their hero but for various different reasons. “They always told me… do something good, do something respectable and do it well. No matter what that is, always do you best and do something good,” Roger Mitchell (Chaff) said with a sense of gravity in his voice. When I asked Patrick St. Esprit, who plays the bad guy Commander Thread what makes a good hero he said “Forgiveness… Someone who has grace under pressure.”

The most poignant answer of the night came from Megan Hayes, the tribute from District 6. She summed up what makes a hero in three words: “Inspiration, sacrifice, and selflessness.” In a night where we welcomed people to the red carpet as conquering heroes and reveled in the celebrity of Hollywood, it was clear that none of them would be here without the inspiration, sacrifice, and selflessness of the unsung heroes we interact with everyday.

The Hunger Games: Catching Fire opens in the U.S. on Friday, Nov. 22.