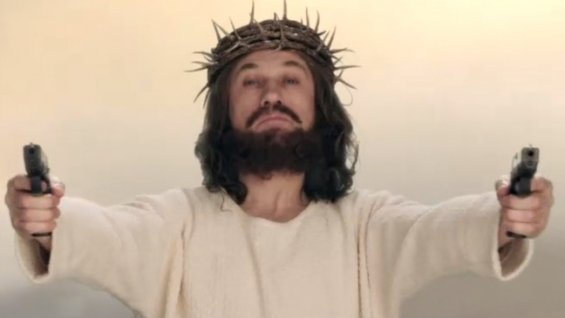 Three recent examples of conservative Christians in the news: of course, these are “newsmaker” Christians—people who have their own publicists and media machines. They may or may not be reflective of Christians or evangelicals as a whole, but they are reflective of what passes for religious commentary on culture in the public square.

Christians Gone Wild I: The “Bible”

Mark Burnett, producer of quality television like Survivor and Sarah Palin’s Alaska has produced The Bible, which he describes as a “10-hour docudrama of the best-loved stories from Scripture.” Burnett says he and spouse Roma Downey’s desire was to, “Show how the Old Testament connects seamlessly to the New Testament. How they are one sweeping story with one grand, overriding message: God loves each one of us as if we were the only person in all the world to love.”

Looking at the trailers it appears “docudrama” has been redefined to mean “epic camp melodrama.” Anyway, it’s good to know the thesis of my dissertation is still valid. This of course does not stop every major Christian outlet from shilling for the series, including an exclusive webcast with Burnett and Downey at Rick Warren’s church. Somewhere, Cecil B. DeMille is smiling.

I try to refrain from “phone-in” reviews: that is, reviews that don’t actually cover the thing I’m supposed to be reviewing, and instead focus on some soap-box opinion that I could express whether I saw the movie or TV show or not. But I have to wonder if Mark Burnett has even read the Bible.

Which part of God’s “personal” love for us is involved in the multiple instances of incest in Genesis? Or in driving a tent peg through a man’s head? Or killing 200 men and presenting their foreskins to the king in order to woo his daughter? Or infanticide, as in the infamous “baby-bashing Psalm?” Or cosmic vengeance through cannibalism?

The Bible isn’t “The Good Book.” It isn’t even a book. It’s a collection of texts written over the course of centuries by writers in different languages, in different times, places, and experiences. It has passages of profound beauty and spiritual insight and passages of gory and violent horror. It is no easier to read or understand than it is to have a deep and meaningful faith. The fact that after more than a hundred years of historical-critical biblical scholarship we still haven’t gotten this across to our culture is one of the great failures of liberal Christianity.

The objections to Seth MacFarlane’s Oscar performance seemed to come from all sides of the political spectrum. Wanda Sykes had the best Tweet: “I never thought I’d say this, but I owe Billy Crystal an apology.”

I felt the same ambivalence about the Oscars that I feel about Family Guy. MacFarlane has an infectious love of movies, musicals, and pop culture references, and is a skillful creator of characters and voices. But he wastes his talent on unfunny “look-at-me-I’m-naughty” bits based on misogyny, violence, racism, and homophobia.

Besides its success in motivating conservative FCC commissioners to level legally indefensible fines against media companies, the PTC is a pretty ineffective organization. In fact they seem to serve the opposite purpose of their stated mission—just like the “Banned in Boston” moniker of old, the PTC acts to promote risqué culture by giving its negative stamp of approval.

Most offensive is the PTC’s claim to speak for the “American Family.” They and other right-wing groups have turned the word “family” into political shorthand for religious fundamentalism. Anytime I hear a group claiming to speak for “the family,” it sets my teeth on edge, knowing that yet another word, institution, or concept that is supposed to define love, understanding, and acceptance, has been twisted into a term of hate by so-called Christians and other people of dubious and intolerant faith.

By now the “DJesus Uncrossed” skit on Saturday Night Live has been thoroughly discussed and dissected. Several bloggers have pointed out the hypocrisy of official “Christian spokespeople” being offended by this skit, when they themselves celebrate a violent and vengeful Christ in their apocalyptic fantasies, most notably the Left Behind series.

It’s almost comical when the American Family Association’s resident bigot, Bryan Fischer, simultaneously denounces the spoof as violent and blasphemous in a press release, and then Tweets: “SNL crew will discover one day they were closer to the truth than they knew with ‘DJesus Uncrossed.’” Almost comical.

The point I’d like to make is about the Left Behind phenomenon and the general sense of cultural oppression felt by some evangelicals. (Lest you think I’m a liberal Christian who lamely focuses on evangelical trends of the last decade, Left Behind isn’t going away: Nic Cage is starring the reboot.) Whenever a group starts fantasizing about apocalypse, it’s important to ask the question, “Who’s world is ending?” And, perhaps as important, “Who’s world is beginning?”

Sometimes the answer is obvious. One of the most compelling apocalypses of the last 20 years was Tony Kushner’s Angels in America. Drawing on Jewish, evangelical Christian, and Mormon Millennial mythologies, Kushner’s Pulitzer-winning dramas were a creative, healing, grieving response to AIDS. When an entire community and way of life is dying, it seems to be of some comfort to imagine one’s self as part of a final, doomed prophetic generation.

In the case of current evangelical Millennial movements—from Left Behind to the Tea Party—what’s dying is a vision of America that is based on white conservative Christianity. The changes happening in culture: same-sex marriage, globalization, secularization, and the demographic ascendance of groups that used to be known as ethnic minorities, are just too big for some people to handle.

The irony here is that the people who are actually being “left behind” are the white evangelical Christians. The fantasy of an avenging Christ who will one day stick it to the gays, secularists, and intellectual and governmental elite is a cry of desperation. “One day, Jesus is going to return and waste these people. Then they’ll see.”

For those of us who believe that a more ethnically and religiously diverse, publicly secular, globally aware, communally oriented culture is a good thing, there’s reason for hope in the apocalyptic fantasies of the religious right. They’re losing the culture wars they created, and their end-times rhetoric is a sign they know where things stand.

But there’s also reason for compassion here. Seeing our fellow human beings in a state of paranoid fear about the future should not bring out a sense of triumphalism. Especially since some of the fear is based in differences of education, class, technological sophistication, and cultural opportunities. If we claim to be Christian, we have to love our conservative brothers and sisters. Even when they react with fantasies of violence to a world that has them feeling increasingly unmoored.

* The PTC is technically not a “Christian” organization, but its board is made up entirely of evangelical Christians, conservative Catholics, and conservative Jews. It was founded by far-right Catholic activist L. Brent Bozell. It’s about as “nonsectarian” and “nonpartisan” as the National Organization for Marriage.