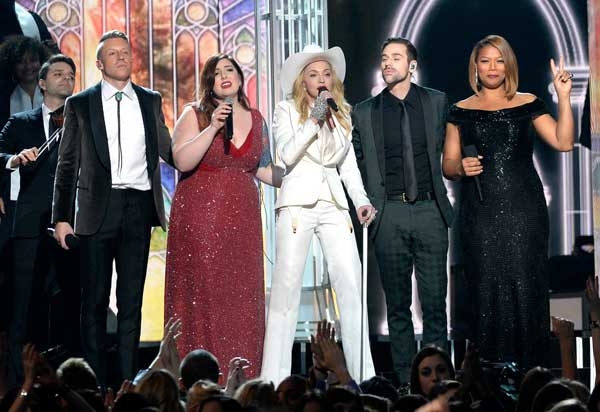 Last night, we were treated to one of the stranger spectacles in awards show history, even taking into account Miley Cyrus’ twerking on the MTV Video Music Awards last fall. This was a mass wedding of gay and straight couples, presided over by Queen Latifah, with music supplied by Macklemore and Ryan Lewis, Mary Lambert, and Madonna. It’s a strange commentary on equality when you can say same-sex couples are now “free” to participate in legally-binding rituals every bit as weird as the straight mass marriages put on by the Moonies.

If there was ever need for proof that religious needs are being met by so-called “secular” popular culture, this was it. I mean, what were Queen Latifah’s credentials to conduct that wedding? I’m sure there was some kind of state sanction, but didn’t the real spiritual and societal authority come from her “royal lineage” as a rapper-turned-actor? I’m sure The Queen can conduct whatever religious/governmental ceremonies she wants at the Grammys.

As with marriage equality as a whole, I am ambivalent leaning toward happy that this event could take place on national television. As silly as this stunt was, gay and lesbian people have come a long way in a short time from fighting for basic dignity and survival during the worst years of the AIDS crisis to being celebrated on national television as a symbol of love and commitment. These kinds of public celebrations of marriage equality are exorcising a lot of demons pumped into the culture by the Jerry Falwells and Pat Robertsons of the world who once convinced a majority of Americans that gay people were the absolute antithesis of faith, family, and community. To those who are tired of the self-congratulation over the wave of marriage equality sweeping this country I’d like to suggest that after decades of lies, distortions, and vilification of gay lives, let us have our moment of celebration.

I particularly aim this comment at my friends on the left, many of whom I work with in LGBTQ activism, who find the focus on marriage equality from mainstream organizations like the Human Rights Campaign to be a massive waste of money and diversion of attention from more important issues. The argument here is that more marginal groups in our community, such as trans* people (note: the asterisk is for all the identity variations that begin with those four letters) and queer youth are still in the fighting for survival phase, while rich gay couples are ready to plan their weddings and hoist a “Mission Accomplished” sign over the whole equality movement.

I agree with the concern that more marginal groups are being forgotten, and the fear that gay and lesbian people will disengage once marriage equality is universal. After all, what good does it do the queer teenager living on the streets and contemplating suicide, or the trans* person fired from their job, if Edith Windsor can preserve her inherited fortune from the Federal government?

The thing is, the marriage case that was brought before the Supreme Court was won by Edith Windsor, but the benefits won went far beyond her case. Wealthier gay couples, and dare I say, activists with educations and friends in civil rights law, can find ways to create legal protections around their relationships. Many poor and working-class same-sex couples don’t have this same kind of access to legal assistance. Marriage laws act as a gold standard for creating legal kinship ties that cannot be taken away by the pettiness of local bureaucrats who don’t see same-sex families as valid.

Furthermore, when you look at the numbers of LGBTQ folks raising children, this kind of state recognition of families is not frivolous, it is vital. Nearly forty percent of all people who identify as gay or transgender have a biological child, and many are raising adopted children. Same-sex couples with people of color are raising children at higher rates than opposite-sex couples with people of color. And the concentrations of gay people raising children are highest in Red States with high poverty (Mississippi, Wyoming, Alaska, Idaho, Montana.) Couples in these states are not likely to gain marriage equality, and the essential rights of adoption and inheritance that are decided at the state government level, except through the continued assistance of powerful legal interests like Freedom to Marry, Lambda Legal, the ACLU, and yes, the embodiment of evil corporate activism, HRC.

There is a larger justice issue here, beyond marriage, however, and this is where my celebration of marriage equality goes from happy to ambivalent. Why do we assign the benefits and privileges of a society only to those who have been lucky in love and who want to have their relationships “blessed” by the state?  There are people for whom monogamous marriage is not the “answer,” either in their relationship lives, or for their legal and economic issues. If, as Americans, we supposedly value the rights of the individual, think of how much more economically and practically “free” individuals are to choose family relationships that work for them—married, cohabiting, or single; with children or without—in social democracies, where benefits are distributed more equitably. To put it briefly, why should anyone have to get married in order to have health insurance, or housing, or the right to pass on savings to the person of their choice, or to immigrate, or to raise a child?

Short of waking up one morning and finding America to be a social democracy, however, I think we have to pursue the changes in law and society that are going to do the most good for the most people. I can’t think of a cause that better fits that practical measure for the LGBTQ community right now than marriage equality.

In the end, I turn (as I think we all do) to the wisdom of Macklemore: “A certificate on paper isn’t gonna solve it all, but it’s a damn good start.”

To my friends who are ready to declare victory once they get their rights through marriage equality, I’d stress the first part of that line: “A certificate on paper isn’t gonna solve it all.” To my friends who dismiss marriage equality as some kind of bourgeois plot that prevents real justice from happening, I’d stress the second part of that line, “It’s a damn good start.”