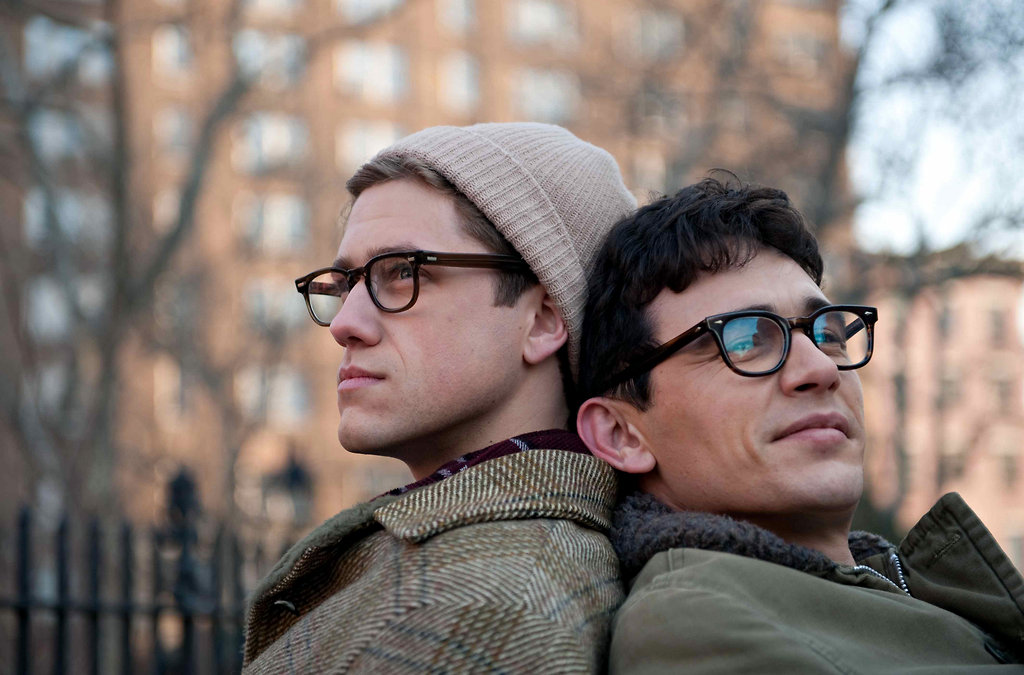 I saw the best minds of my generation destroyed by

dragging themselves through the negro streets at dawn

looking for an angry fix…

Pure dissertation bait; basis of multiple literary parodies; a poem that once shocked the world, now preserved in canonical amber.

In Howl, about the creation and obscenity trial of Allen Ginsberg’s iconic 1956 poem, gay documentarians Rob Epstein and Jeffrey Friedman (The Times of Harvey Milk, Common Threads: Stories from the Quilt, The Celluloid Closet, Paragraph 175) have made a completely different kind of film from their usual talking head and film clip pieces. Part poetry reading, part courtroom drama, part psychedelic animation, this is a hybrid nonfiction film–a movie without the usual documentary hallmarks that nevertheless tells a story that is true.

The big news here is James Franco as Alan Ginsberg. He wouldn’t seem to be the most obvious choice in casting this role. Although Franco has the acting chops, and big horn-rimmed glasses and putty behind the ears to make them stick out go a long way toward the proper appearance, Franco is just too good looking. Every feature that was slightly off on the face of the young, homely Ginsberg is in the right place on Franco.

Not that this takes much away from the film. Franco picks up the poet’s voice and mannerisms brilliantly in an extended, intercut interview and poetry reading (all the words used are Ginsberg’s). Franco’s reading of the poem in the guise of Ginsberg gives a sense of the passionate, improvisatory rhythms that make “Howl” shudder and rock. Besides, the thrill of seeing the straight and whip-smart pretty boy Franco nail yet another gay role is one that doesn’t fade for the gay men who are presumably this film’s primary audience.

The courtroom scenes add some suspense to what would otherwise be a purely mystical enterprise, and again, the words are taken directly from the historical record—the courtroom transcripts of the 1957 trial of the poem’s publisher Lawrence Ferlinghetti. Jon Hamm and David Strathairn seem to be having fun as the opposing counsels arguing before judge Bob Balaban. Strathairn as the district attorney gets to deadpan lines like, “Do you know what angelheaded hipsters are?” Four literary experts act as witnesses, attempting to discern through some objective means if the poem has “redeeming social importance,” and in the process demonstrating the absurdity of putting a piece of literature on trial. The most entertaining witnesses, played by Mary-Louise Parker and Jeff Daniels, assure the court arrogantly that the poem is completely without literary merit or social importance.

Much of the controversy centered on the poem’s unflinching portrayal of homosexuality – all those “blond and naked angels” penetrating with “swords.” It’s hard to imagine the same hullaballoo would have followed if Ginsberg had written in solely heterosexual terms. What problem would 1950’s white, heterosexual-dominated America have had with Ginsberg’s portrayal of Neal Cassady’s straight sexual exploits as “cocksman and Adonis of Denver?”

There seems to be a misunderstanding about the animated sections of the film, designed by Eric Drooker. Most reviews I’ve read have dissed these scenes, toeing some English professor’s line that poetry can’t be illustrated because it over-literalizes symbolic language. But Ginsberg was a friend and fan of Drooker and the two collaborated on one of the poet’s last books, Illuminated Poems. So the idea of illustrating and animating Howl must surely not rile the ghost of Ginsberg too terribly. Secondly, whatever “Howl” is as a cultural touchstone, it’s a difficult piece of poetry—a non-linear kaleidoscope of complex imagery and metaphor. The animations provide illustrative structure that helps the viewer make sense of the poem.  Besides that, they’re kinetic and hallucinatory, beautifully designed and scored. They make a talky film soar.

The transcendent animation and music, insights from the poet, and the words of the poem itself circle around the viewers and levitate the audience like Ginsberg once said he was going to do to the Pentagon. It’s one of the most spiritual films I’ve seen in a theater in quite some time. I found myself sitting still while the credits rolled, eyes closed in meditative silence.

In the film, Ginsberg explains that when we’re talking to friends, especially close ones, we don’t edit our conversation. We go on about politics, drugs, neuroses, sex—whatever crosses our minds. His idea of poetry is to break down the wall between the conversation of everyday life and the “conversation with your muse.” The line leaves me imagining poets before Ginsberg awkwardly editing their conversations with their muse, leaving out the tasty bits.

A lot of people seem to be trying to pull the same thing with God—like if there is a being so intimate to life as to construct our bodies from the dust of the earth and give us breath and spirit, that being somehow doesn’t know we think about sex or use the toilet. We seem to think when we show up on Sunday morning to sing hymns, our clean-scrubbed faces hide the notion that we could ever have “howled on [our] knees in the subway” and be “dragged off the roof waving genitals and manuscripts.”

Well the hiding game’s not working. It’s not working for God or for us, and it’s not working for religion. What—in God’s name—are we doing as religious people if we can’t bring our whole selves before God as an act of faith? For Christians, if the idea of incarnation means anything, it’s that God gets us. God gets our hunger, our anger, our lust, our hopelessness, our cowardice, our laziness in the face of injustice. God gets the thrill of creation, God gets the pleasure we take in our bodies, God gets the meeting of two or more souls in deep conversation. God gets the howl of fear and death, moaning forth in an “eli eli lamma lamma sabachthani saxophone cry.” God gets us, and loves us. There is nothing we can hide, or need to hide.

The last section of Howl is a benediction. It was written in Berkeley, and a few weeks ago I made a little pilgrimage to a poetry park across the street from the address where Ginsberg lived when he wrote this section, in tribute to the prophet Alan who struggled with his art, his mind, and his body and came up with the rawest of prayers.

The nose is holy! The tongue and cock and hand

holy! everyday is in eternity! Everyman’s an

kindness of the soul!

It should be read in church.