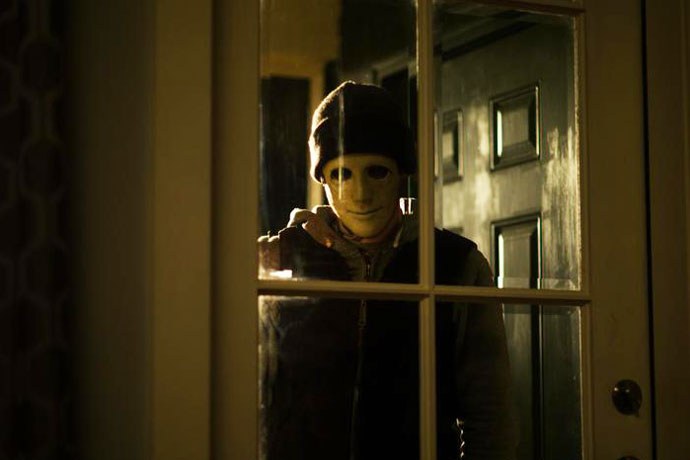 A single, deaf-mute woman living alone in a cabin in the woods. The horror/thriller Hush (Blumhouse and Intrepid Pictures) almost writes itself. As such, it offers little in the way of narrative surprises, but its fresh use of sound–given its heroine’s disabilities–adds something intriguing to the mix. 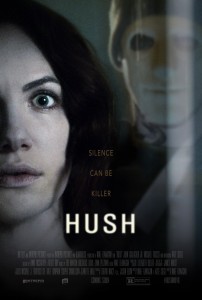 Maddie (Kate Siegel) lives alone in the woods where she’s trying to finish her second novel. She communicates with the outside world via text messages and Facetime chats. Her neighbors, Sarah (Samantha Sloyan) and John (Michael Trucco), are close friends, and Sarah is learning sign language in order to better communicate, even though Maddie is adept at reading lips. As Maddie cleans up a botched dinner one night, Sarah rushes to her door in a panic, fleeing an attacker. Maddie cannot hear–and therefore doesn’t see–the killer stab Sarah to death on her front porch. When the killer recognizes that Maddie is deaf, he initiates a cruel game of cat and mouse. When Maddie finally realizes what’s happening, she writes on the door with lipstick that she hasn’t seen his face and that her boyfriend will be home soon. The killer removes his mask and calls her bluff: he overheard her Facetime conversation with her sister when she mentioned being single. The rest of the film follows Maddie’s attempts to survive in something like real time leading up to a final, brutal showdown with the killer.

Fans of horror and thrillers will find much to enjoy here, and viewers interested in low budget filmmaking will likely find inspiration too (though hopefully not in the violence against women). The use of sound is intriguing, and it’s best to watch with the audio as high as your neighbors can tolerate. Although director Mike Flanagan occasionally places us in Maddie’s perspective by dropping out the sound, he could have done this more to ratchet up the anxiety. It would have been interesting to see how Hush could have worked as an even more silent film. The film also breaks the mute wall–so to speak–as Maddie’s voice inside her head narrates possible endings for her and the killer at the end of the second act. This feels like a lack of faith in the audience as well as a lapse in creativity.

Nevertheless, Hush hooked me from the beginning, thanks in large part to the compelling Siegel, who gives a strong performance here. It will be interesting to see if she can avoid being pigeonholed in this genre. John Gallagher, Jr. (also recently in 10 Cloverfield Lane) as the killer is suitably disturbing with his lack of motivation for terrorizing these women and, unfortunately, feels like a stand-in for many of the disturbed, single young white guys that terrorize so many of our communities. The film doesn’t even remotely attempt to explain why he has 13 notches on his weapon of choice, the crossbow. Flanagan also does a good job of setting up elements of the final showdown early in the film to keep viewers on the hook. Who knew a smoke alarm could make such a kickass weapon?

Hush (87 mins.) is rated R for strong violence/terror and some language and streams on Netflix starting tomorrow, Friday, April 8th.