Logan Sandler’s debut feature, Live Cargo echoes the first (and best part) of Lars von Trier’s Antichrist. Shot in black and white, both films deal, in large part, with a couple losing a child and their (in)ability to connect through that grief. After the jump, read on for more on Live Cargo as well as a brief interview with Sandler. 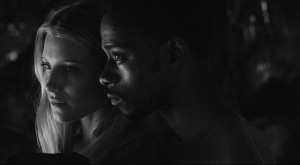 Nadine (Dree Hemingway) and Lewis (Keith Stanfield) retreat to the Bahamas where Nadine has a family home. She falls back into the rhythms of the island, but Lewis finds it more difficult to plug in, especially as Nadine keeps him at arm’s length. Nadine is friends with the town’s mayor, Roy (Robert Wisdom), who is at odds with another local fisherman, Doughboy (Leonard Earl Howze). As the film progresses, we see that Doughboy’s business isn’t just fishing.

I was lucky enough to get a few questions with writer/director Logan Sandler. Here’s what he had to say about the themes of and his approach to the story.

RP: So where did this story originate? Though it has a unique setting, its story and themes transcend the particularities of place.

LS: I grew up spending my summer & winter months in Staniel Cay, Bahamas – it’s a particularly small tight knit community unlike anything I’ve seen before. The type of place where everyone knows exactly what you did yesterday. My inspirations generally begin with a focus on location and geography, so the time spent there in this setting was integral. The tonal quality of this place I felt had to be captured on film. This feeling has always stuck with me. In 2013, a 40 foot boat filled with Haitian migrants capsized off the shores of the island. Sadly, many people died that day. I returned after this tragedy with my co-writer Thymaya Payne and we began hearing first hand accounts from those who were involved in the helping of the rescue efforts. I was heartbroken, but also touched at the compassion embodied by everyone on the island who came together to help those in need. There’s much more to the film than this event, but I knew with this real life tale, I had found in many ways the heart of my first film. The photographs & stories I came across remain fresh in my mind till this day.

RP: So when dealing with a tragedy like that, there are many approaches you can take in terms of style and aesthetic. Can you talk about the visual aesthetic and the choice to shoot in black and white? I immediately thought how the images might have been similar to the Florida Keys in Bloodline, had it been shot in color. While the photography here is beautiful, there’s also something grotesque about it.

LS: After spending a lot time there, I realized it wasn’t possible to re-create with any exactness the true power that the color of the Bahamas exudes. There is no type of camera or effect you can use to capture it without the colors feeling overwhelming, dishonest, and distracting. From the onset, we wanted to transport the audience to another world. For us, the black & white imagery had an inherent mystical quality that allowed each image to become a painting of this other cinematic reality. A reality that we could only achieve with filmmaking. By taking away the colors, our intention was to further expand the audience’s imagination of this time & special place allowing them to focus solely on the characters and the story. Ultimately, bringing the audience into a dream-like state where they would be free to envision the tones of the environment & characters in their own unique way. With this, the black and white then draws you into a focus on the faces & textures in a way that color cinematography would not allow you. We had never seen the Caribbean captured in such a way. I believe there was something exciting & fresh to the choice.

RP: It definitely adds a gravity to the narrative, which, in a way, almost feels biblical in nature. A couple has lost a child but (SPOILER) miraculously receive a child from horrific circumstances. Can you talk about that tension between gift/blessing and curse?

LS: There was this idea of fate present in the film from it’s conception. All of the characters were resigned to a certain path that could not be changed. It’s not to say that they didn’t have a free will, but I most certainly felt that there was a bigger spiritual force at play bringing them together. I think there’s something very miraculous about that moment. Unfortunately, it arises from something very horrific, which can color the moment grey for some viewers, but ultimately there’s a sense of hope that arises. We are shown the reality of how the universe gives and takes. It’s important that it doesn’t do so in a perfect fairytale fashion. In order for this moment to ring true, there had to be this duality present. Otherwise, it would have felt contrived and false.

RP: In talking about experiences of terror or struggle, we know people respond in different ways. This might be due to the moment in which our country finds itself, but with Sam Dillon and his brilliant performance as Myron, there seems to be a nod to some pent-up young, white anger, rage, and disillusionment. Was this something that was on your mind–or on the table, so to speak–when you were creating the film?

LS: That’s very interesting, but no “white anger,” was never something I had thought of. Especially, in an American context. I definitely do think there’s quite a bit of rage and disillusionment within Myron–this can be attributed to his current circumstance and the many things that Myron has had to endure over the course of his life. His character is very specific and unique in the sense that he can only exist on this exact island. There’s nothing in my mind, that we can accurately compare Myron too. With that, Sam really spent a lot of time listening to the island and embracing the atmosphere by himself to find his loneliness.

RP: Finally, and speaking of powerful actors, how did you get to work with Keith Stanfield and what was that like? I regard him as one of the best young actors working today.

LS: Keith had starred in my previous short film, Tracks. Since then we have grown to be close friends. The role of Lewis in Live Cargo was specifically written for Keith. Working together is very organic and creative. We’re definitely not afraid to try different approaches when tackling a scene. There were definitely a few times on this shoot in which Keith, myself, and the camera operator would just go for a walk offset and try to shoot something interesting. Many of the same things excite us, and our ambitions seem to inspire one another. He’s someone that I will hopefully always have on my team.