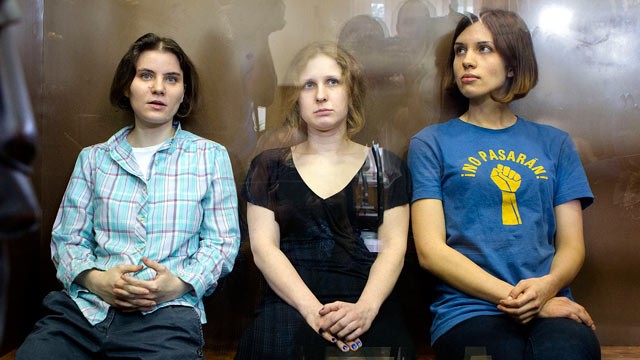 With our recent move to L. A. and my participation in the Act One Producers and Executives Program, I have embarked on something like a new career path, moving away from the classroom and towards filmmaking. Every now and then, however, I still see a film that makes me wish I was back in the classroom to discuss it with other professors and students. The first film in HBO’s summer Monday night documentary film series, Pussy Riot: A Punk Prayer, is just such a film.

Filmmakers, Mike Lerner and Maxim Pozdorovkin focus on the Russian punk rock group Pussy Riot. Actually, they’re not so much a group as they are a movement with several anonymous participants (a reality I wish the filmmakers would have explored further). As you’re probably aware, three of them, Nadezhda Tolokonnikova, Maria Alyokhina, and Yekaterina Samutsevich, were part of a protest performance in the Cathedral of Christ the Savior in Moscow on February 21, 2012. They were subsequently arrested, charged with “hooliganism,” and sentenced to two years in a penal colony. Yekaterina had her sentence suspended, while Nadezhda and Maria continue to serve out the remainder of theirs.

Pussy Riot: A Punk Prayer addresses several issues that will no doubt spark lively discussion, particularly the relationship between church and state, the relationship between art and religion, the role of art (here music) as political protest, and censorship. Critics of the film cite its lack of objectivity, but even this is a point worthy of further discussion: in what ways could this documentary have been more even-handed? It’s difficult to “normalize” Pussy Riot’s opposition when members of it who profess Orthodox Christianity seem to long for the time when such “demon-possessed” women would have simply been burned at the stake.

If you missed it, you can still catch Pussy Riot: A Punk Prayer on HBO GO (if you’re an HBO subscriber). No other replays are scheduled for the near future, so also keep an eye out for the DVD. Warning: the film contains one scene of an explicit sexual nature.