Having moved back to Civilization, I now have access to an embarrassment of riches when it comes to gay cinema. In the past few weeks I was able to take in Spa Night, a Kickstarter masterpiece by indie director Andrew Ahn, and Being 17, the most recent release from revered French director André Téchiné. Both films place the drama of young gay men coming out within deeply embedded social and geographical contexts: in Being 17, a rugged mountain village in the Pyrénées; in Spa Night, a close-knit family of Korean Americans living in Los Angeles. 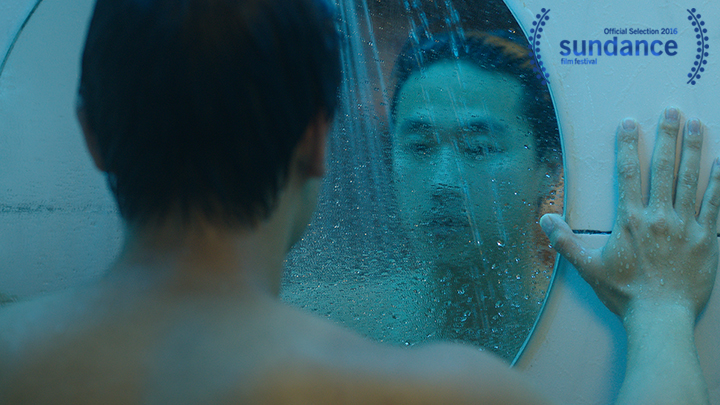 The publicity campaign for Spa Night features the familiar erotic imagery of strapping, sweaty bodies in bathhouses: steam, showers, men in towels. Who can blame them for trying to attract a gay male audience? But the reality is more complex. The spas in question are common in Korean communities as social spaces—even family spaces—to escape, to de-stress, or to detox after a night of partying. Early on, we see the protagonist, David (Joe Seo), giving his father (Youn Ho Cho)  a rubdown at one of the family spas, and they later meet in a common area with his mother (Haerry Kim)

The family owns a struggling restaurant in Korea Town. David has put off college to help run the family business. An early scene shows David’s ease in negotiating between cultures as a first generation Angelino, when he translates between a Spanish-speaking produce supplier and his Korean-speaking father.

David’s family’s ties to the community include their Korean speaking church, where a perhaps overly helpful parishioner offers her son’s hospitality for a weekend at USC so David can get a feel for the place—the subtle implication being that David needs to get on with going to college.

David stays in the dorm with his church friend, only to find himself involved in a college bachannale including girls, karaoke and drinking games. At the end of the night, the men separate from the women and head to a Korean spa to try to sweat out the alcohol. While still a traditional spa, this one is a little seedier, and men only. In his inebriated state, David begins staring at his church friend’s naked body through the neon lit steam. Receiving a homophobic cold shoulder from his friend the next day, David heads back to his family.

After the family is forced to close the restaurant, David’s father careens between an unsuccessful job search and drunkenness. His mother goes to work as a waitress for the overly helpful church lady. Meanwhile David has taken a towel boy job at the men’s spa. Although not an overtly gay bathhouse, David notices men disappearing into the steam rooms together for sex.

During a Q&A with the director after the film, Andrew Ahn described the men’s spa as a liminal space where David could begin to explore his sexuality while still being on familiar cultural ground.

At heart, this is a family drama—the problems of David’s parents at times overshadowing the coming out story arc. As his family grasps at their fading American dream, David feels more pressure to succeed by getting into college and fulfilling his duty as a son. His growing awareness of his sexuality seems like one more crisis for him to negotiate.

The film doesn’t give us the usual dramatic scenes of family disclosure or discovery, the sturm und drang before the eventual grudging acceptance. David’s coming out is an interior journey, which Joe Seo plays magnificently. The film demonstrates how much of a cultural luxury coming out can be for many of us—a privilege some of us have as established families in a relatively tolerant culture—as opposed to those struggling both with sexual or gender identity and living at the margins of American society. 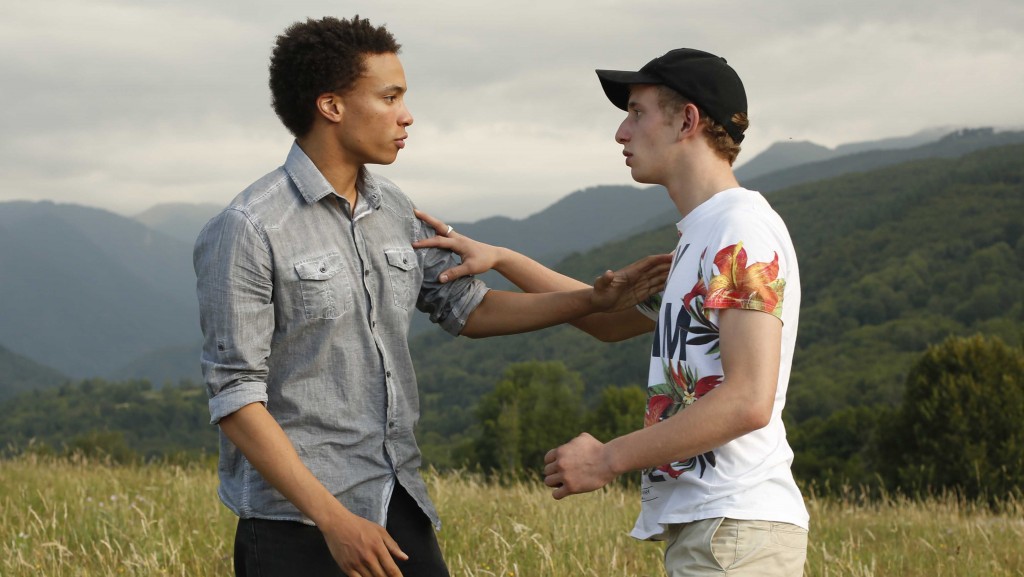 In contrast to the more solitary coming out struggle of Spa Night, Being 17 plays its variations on the theme of coming out through a teenage romance. There’s a bit of a city mouse/country mouse story here as Damien Kacey Mottet Klein lives with his mother Sandrine Kiberlain in a cozy mountain town. (His father, played by Alexis Loret, who comes in and out of the story, is a helicopter pilot in the French military, fighting in a Middle East conflict zone.) Thomas (Corentin Fila) is the adopted son of a farm family up in the mountains, and commutes several hours to school each day by hiking and by bus.

Although we know Damien and Thomas are going to be the item as soon as the spot each other from across a classroom, rarely does a filmed gay teenage romance start so violently. They loathe each other at first, with Thomas tripping up Damien in class for showing off by reciting a Rimbaud poem. The two of them end up in frequent fights at school, so much so that it gains the attention of the administration and their parents. While trying to smooth things over between her son and Thomas’ parents, Damien’s mother, who is a doctor, discovers Thomas’ mother is pregnant, and begins taking care of her. When Thomas’ mother has to come into town to the hospital, Damien’s mother rather cluelessly invites Thomas to come live with them. It goes about as well as bringing in a dog to live with a cat.

Both boys seem to wrestle with the expectations of masculinity. For Thomas, being a man means self-sufficiency and working hard on his parents’ farm, and shadow-boxing with his fear that as an adopted child, his parents would rather have a “real” son. For Damien, who takes combat fighting lessons from an older neighbor, being a man seems to mean living up to his father’s example of a soldier’s bravery. Rarely do gay coming of age films explore concepts and pressures of masculinity as deeply as Being 17. This isn’t the jock/effeminate boy fantasy of so many films. Damien and Thomas are competitive young men, desperate to show their independence, and their rivalry is only slowly and fitfully overcome by their desire for each other.

It is typical for Téchiné–one of the most important post New Wave French directors–to explore issues of gayness and coming of age from unexpected angles, and dealing with multiple strands of identity. Being 17 has been compared favorably to his most acclaimed film, Wild Reeds (1994), which portrays the sexual awakening of four students at a French boarding school against the backdrop of the Algerian war. Being 17 is a film exploring late adolescent love some two generations hence, but some of the internal boundaries are still there: Damien is the Gallic son of a decorated soldier, and Thomas is probably Algerian.

The aggressive posturing between Damien and Thomas seems to be the perfect metaphor for a postcolonial love affair. Just as David’s taciturn and internalized conflict in Spa Day represents the difficulties of weaving multiple cultural, religious, and familial pieces into a gay identity.

In the end, thank God for desire. Whatever the complexities of being gay in a multicultural society, the need for physical and emotional connection is still what draws us out of personal and social closets into the blinking, naked light of day.