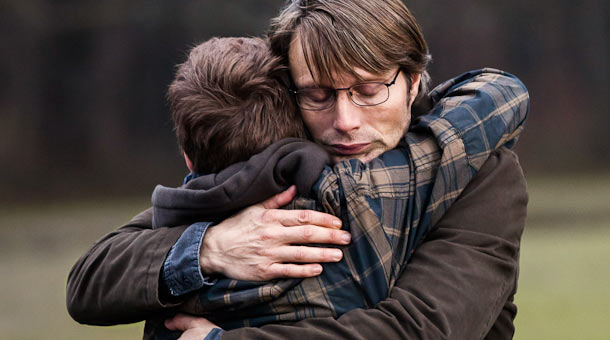 It’s that time of year again when, for really no good reason, I scramble to see as many of the Oscar-nominated films as possible. It’s not like I have a vote…yet. All the digital streaming services make the task infinitely easier than it was just a couple of years ago. Several of the films nominated in “minor” categories are streaming on Netflix. First, see The Act of Killing as soon as possible. For a double-dose of depression, follow that up with The Hunt. I promise, they’re both really, really good films.

Denmark’s Best Foreign Film entry, The Hunt takes place in a small Danish hunting village. Lucas (Mads Mikkelsen) is a divorced kindergarten teacher. His life is sent into a dramatic tailspin when a student, his best friend Theo’s (Thomas Bo Larsen) daughter ,accuses him of sexual abuse (exposing himself). To make matters even worse, other students corroborate the accusation. Lucas is dismissed from work and eventually arrested. From the start, the film makes it absolutely clear that he is completely innocent. This puts the focus squarely on the town’s fearful, enraged reaction and Lucas’ attempts to navigate it. He has only a handful of defenders, his friend Bruun (Lars Ranthe), son Marcus (Lasse Fogelstrom), and girlfriend Nadja (Alexandra Rapaport), the latter of whom has slight doubts about his innocence. I’ll avoid the spoilers, but as the film progresses and the tensions rise, we are drawn further into the narrative in the hopes that Lucas will, quite literally, survive this accusation.

The Hunt benefits, first, from Mikkelsen’s powerful performance, which ripples throughout the production. There’s a level of skillful acting from everyone involved that strikes a perfect balance between their uncertainty of whether or not Lucas is guilty and their outrage that he might be. But when his neighbors break with anger, they really break. The beautiful cinematography perfectly captures the peaceful veneer of an upper-crust community with an ugly beast lurking underneath the surface, waiting to pounce if given the chance.

The film does not downplay outrage over sexual abuse, but rather shows how quickly and effectively mob mentality can take over, especially when fueled by (rightful) disgust over the sexual abuse of children. Friends and I have commented on how the accusation of sexual abuse can ruin a life, especially for teens. It’s something that, in many cases (as seen in The Hunt), can’t be 100% (dis)proved. Did the student make up the accusation or is Lucas really guilty? We don’t see his every interaction with the students. There are, essentially, two endings to the film, which has been problematic for some critics. But this duality points to that very uncertainty, and Lucas’ inability to shake the accusation.

If I have one problem with the narrative, it’s the way in which the kindergarten headmistress handles the case. She says she’s pursuing everything “by the books,” but if that’s the case, then they’re in dire need of some new books. It transpires more like small town gossip rather than an official investigation. On the other hand, given the small town context, I love writer/director Thomas Vinterberg‘s use of the church (on Christmas Eve no less) as the location in which Lucas finally snaps and speaks up for himself in front of the whole community. Rather than simply declaring his innocence, he demands that Theo look him in the eye and tell him what he sees. When Lucas shouts “Nothing!” it’s both an admission of innocence and a realization that this ordeal has spiritually and emotionally drained him. You’ll feel equally drained when the end credits roll.

The Hunt (115 mins.) is rated R for sexual content including a graphic image, violence, and language and is streaming on Netflix.