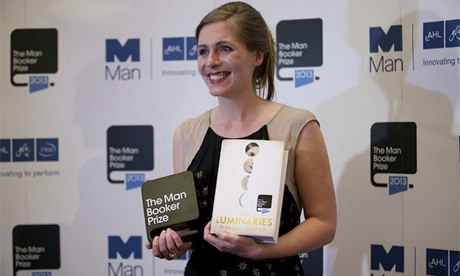 Every now and then, when I finish watching a movie, I ask myself, “What the hell just happened here?” Usually it involves some crazy Asian shock film or a whacky indie film. Rarely do I feel this way when I finish a novel. Given the slower pace of re-reading, I can delve into the world more deeply and return to passages that I may have simply glossed over. But this is exactly what happened with Eleanor Catton‘s The Luminaries, a puzzling narrative beautifully written.

I’ll attempt a skeletal re-telling of the plot. In 1866, Walter Moody travels to the south island of New Zealand to try his luck in the bustling gold rush there. In the lounge of his hotel, he stumbles into a meeting of twelve local men, who lure him into a tale of a murder mystery, the disappearance of a wealthy, young prospector, and a case of mistaken identity. The mystery centers on an opium-addicted prostitute, Anna Wetherell, the Chinese man who sells her the opium, Ah Sook, a hotelier/fortuneteller, Lydia Wells, and another opium-addicted rookie prospector, Emery Staines. There are dozens of other characters that factor into the events or share their perspective on them. After the men share their versions of the story and bring Moody (and the reader) up to speed, Catton drives the narrative forward, before concluding with a lengthy flashback that “reveals” all the secrets behind the mysteries.

To say that this is what “happens” is woefully unfaithful to Catton’s miraculous 849 pages, which are all the more impressive given the fact that The Luminaries is just Catton’s second book. The mystery and intrigue with which Catton weaves her tale is unparalleled, but not without its own frustrations. When you turn the final page, I would venture, you’ll still be unsure what exactly happened. As such, she challenges the limits of knowledge, which is all the more compelling in this case because the experiences of, in this case, murder, theft, and disappearance demand facts. I was frequently reminded of Rashomon and wondered who, if anyone, would eventually provide a definitive account of the proceedings. Of course, my assumption is that there is one.

A key feature of The Luminaries is the supernatural bond between two people, the identities of whom I will not give away here. But their bond is both beautiful and horrifying, and discloses the reality that when we suffer, we rarely do so alone. The bonds that tie this large cast of characters together feature friendship, betrayal, revenge, and, in some cases, just plain dumb luck. In every case, Catton reveals the ways in which even minor accidents ripple out with unintentional, and some times tragic, consequences.

Though both are monster works of fiction, I didn’t finish The Luminaries with the same sense of narrative satisfaction that Donna Tart’s The Goldfinch provided. However, in the case of Catton’s work, it might be enough to surrender plot frustrations to the beauty of her writing.

For those of you unwilling to brave the 849 pages, you’ll be delighted to hear that a TV series is in the works.