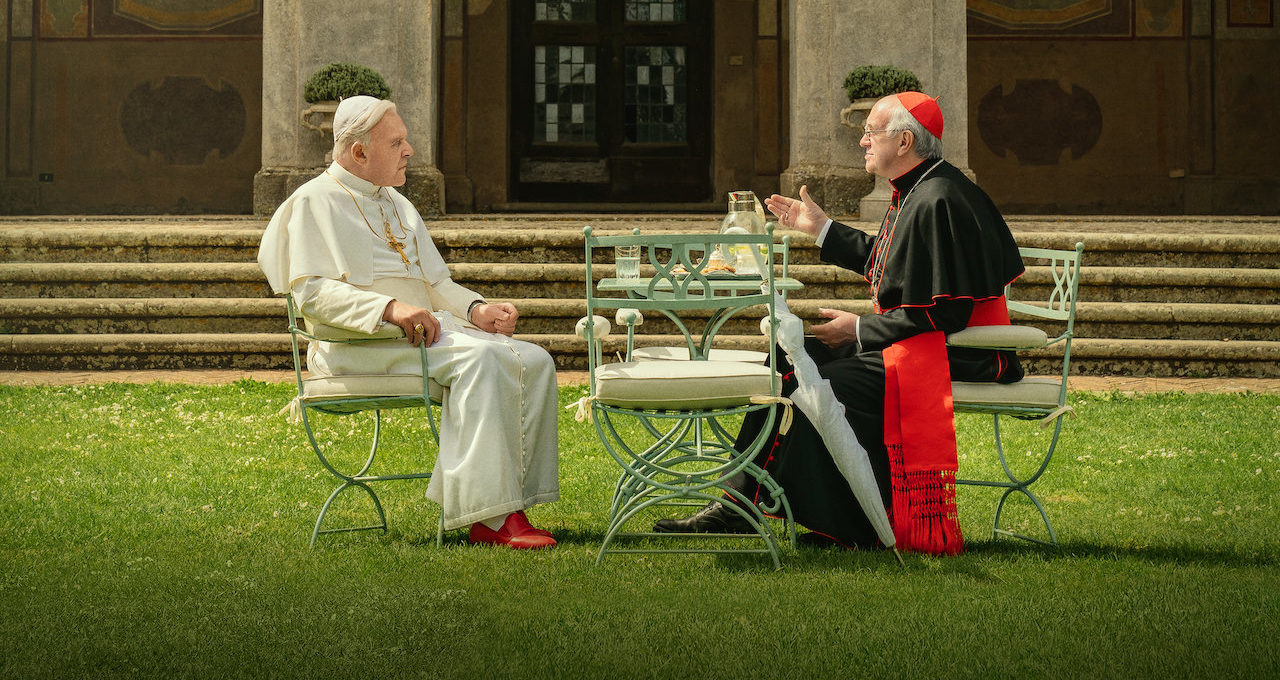 I’m a Catholic Church fanboy. I love beautiful churches and religious artwork. I enjoy ritual—particularly as the Catholic Church has humanized its liturgy post-Vatican II. I admit that I root for the Catholic Church to survive. I don’t know if my own tradition of Mainline Protestantism will exist in 100 years, but I think Catholicism will.

I also like camp. The absurdly theatrical. The extra. The over-the-top combined with attempted seriousness. That the Catholic Church is frequently the location of unintended camp performance only makes me like it more.

It was with these assumptions that I viewed The Two Popes. Written by Anthony McCarten (The Theory of Everything, The Darkest Hour) and directed by Fernando Meirelles (City of God, The Constant Gardener), the film is based on a fictional meeting in 2013 between Pope Benedict XVI (Anthony Hopkins) and Jorge Bergoglio, Cardinal of Argentina, now known as Pope Francis (Jonathan Pryce).

The film begins in 2005 with then-Cardinal Bergoglio speaking to a large crowd during an open-air mass in Buenos Aires. A bishop with the common touch, he has them eating out of his hand (pardon the pun) eliciting call and response during his sermon and adding a shout-out to his favorite soccer team. Just after the mass, he learns of the death of Pope John Paul II and heads to the papal conclave in the Vatican.

The filmmakers seem to have a reverence for both the real theological stakes of the political machinations of the Vatican, and a healthy understanding of the absurdity of its Medieval practices. We see the politicking behind the scenes that leads to Benedict’s election. (Bergoglio comes in second at this conclave.) Meanwhile, a litany of the saints sung by the Cardinals blends into ABBA’s “Dancing Queen” in the movie’s score as the “Princes of the Church” file into the Sistine Chapel to commence voting.

Six years later, Benedict summons Bergoglio to Rome for a personal conference at Gandolfo, the Pope’s summer palace. Benedict has been ignoring letters from Bergoglio stating the Cardinal’s intention to retire. The Vatican Leaks scandal is unfolding, exposing deep corruption in the Curia, and Benedict is afraid the resignation of a popular, liberal figure like Bergoglio will signal an abandonment of the Church.

The two begin to argue while walking around the gardens of the palace. Their quarrel over the Cardinal’s retirement becomes a proxy for everything that separates the traditionalist Benedict and the reformer Bergoglio. Benedict accuses Bergoglio of rogue teaching by allowing divorced Catholics to receive the Eucharist. Bergoglio counters that the mass is for sinners, not the righteous. Bergoglio accuses Benedict of building walls. Benedict says no house can stand without them. Benedict notes Bergoglio used to hold more conservative positions on issues like homosexuality and accuses him of compromise. Bergoglio says there’s a difference between compromise and genuine change.

The Pope even takes the Cardinal’s demeanor and personal habits as a rebuke. Benedict is known for treating the papacy as an aristocratic office—wearing expensive rings and bejeweled crosses, Bavarian lace and red Prada shoes. Bergoglio refuses to live in the Archbishop’s palace, takes public transit, and wears beat-up shoes with the laces untied. Bergoglio is also endlessly amiable, chatting up the gardener, the housekeeping nuns, and the Swiss Guards. Bergoglio tries to disarm the Pope with jokes, much to Benedict’s annoyance. At one point, Benedict attempts to turn the tables on him by making a joke, which Bergoglio doesn’t understand. “It’s a German joke,” Benedict says, “it doesn’t have to be funny.”

After their initial argument ends in stalemate, Benedict invites Bergoglio to his private quarters later in the evening and tries a charm offensive—at least as far as he is able. Over glasses of wine, they discuss music and the struggles of getting older. Benedict plays German cabaret tunes on the piano. He shows Bergoglio his favorite TV show about a crime-solving dog, and says he knows people call him God’s Rottweiler.

Benedict then begins to confess his struggles with faith. He says he hasn’t been hearing God’s voice lately, that he needs a “spiritual hearing aid.” Bergoglio tells him a story about when he first heard God’s voice, when he was a young man, and heard the call to priesthood. The two leave the evening on better terms.

The next morning, Benedict summons Bergoglio to the Sistine Chapel. The conversation soon results in confession—from Bergoglio. He discusses his role in Argentina as the Jesuit Superior during what was known as the Dirty War. His attempts to negotiate between the military junta running the country and to keep discipline within the Jesuit ranks led to two of his priests being kidnapped and tortured. Many in Argentina saw him as a collaborator with the dictatorship. He was forced to give up his position as head of the Jesuits and serve poor rural churches, where his close ties to the problems of common people led him to a more pastoral approach, and convinced him of the need for reform. The scene ends, remarkably, with the Pope giving the Cardinal absolution for his sins.

The film ends with the resignation of Benedict and Francis’ election to the papacy. The filmmakers then show us a montage demonstrating “The Francis Effect.” They show Pope Francis preaching about the necessity of bringing down walls, along with footage of the border wall in the United States. Francis preaches about responsibility to the poor and the refugee, and we see concurrent footage of Francis showing African refugees the Sistine Chapel. The clear implication is that Francis-style liberalism has won and ushered in a new day for the Church.

During the credits, we see how Francis seems to have transformed even grumpy old Pope Benedict, as the two quaff beers and eat pizza while watching the 2014 World Cup final between Argentina and Germany.

It’s a testament to Hopkins’ understatement as Benedict that during his performance I never once thought of “Fava beans and a nice Chanti.” He plays Benedict as a tired and lonely man. His irascibility surely comes from the pressures of his office, but as an introvert and a bookworm, he probably never got along with people that well to begin with.

In a telling exchange, Benedict asks Bergoglio, “This popularity of yours, is there a trick to it?” Bergoglio answers, “I just try to be myself.” Benedict replies, “Whenever I try to be myself, people don’t seem to like me very much.”

Although we are meant to side with Bergoglio, the film goes a long way in humanizing Benedict. We can see how his resignation as Pope was not just to save the Vatican, but to save his own soul.

Jonathan Pryce is just as convincing as Francis. He responds with both frustration and empathy to Benedict’s cantankerousness. Eventually, in recounting what he sees as his failures as a leader in Argentina, he strips himself emotionally bare. The story of young Francis is told in extended flashbacks, with Argentinian actor Juan Minujín playing Bergoglio. Unfortunately, he may be footnoted in any acclaim the film receives because of his “secondary” role as a flashback player, despite spending seemingly as much time on screen as Bergoglio as Jonathan Pryce does.

The scenes with Benedict and Francis in conversation are riveting, as we see two brilliant theological minds dueling, and then trying to bind up the wounds they have caused each other. These sections might have made a good stage play, especially with Hopkins and Pryce in the leading roles. The flashback scenes of Francis’ formative years in Argentina are also absorbing, and work effectively as a biopic. For that matter, an equal treatment of Benedict’s formative years growing up in Nazi Germany, which are not addressed, might also have been a fascinating film. What doesn’t work as well in this hodge-podge of genres are the scenes of Francis’ triumph at the end.

Perhaps if Pope Francis is able to usher in significant changes to Catholic doctrine, this part of the film will be seen as an important piece of hagiography. It seems, however, his initial energy as a reformer has been sapped by his lead-footed response to the clergy sex abuse crisis. There doesn’t seem to be anyone in the upper echelons of the Vatican hierarchy who understands how much of an existential threat this crisis is to the future of the Catholic Church. Radical action is necessary, both in the Church’s teaching and practice on gender and sexuality, and in shaking up the structures of leadership.

Francis, now just a year younger than Pope John Paul II when he died, and three years younger than Benedict when he resigned, seems unwilling and unlikely to enact these changes before his powers decline with age.

This makes the celebratory victory lap of the last part of the film seem misplaced. It focuses on the heady feeling that followed the newly-elected Francis, who brought the possibility of substantive change in the lifetimes of Catholics living today, not in some far-off “someday.” It lauds Francis as someone who opened the doors and windows to the musty palaces of the Vatican. It doesn’t capture the reality now, when those doors are closing, as a dysfunctional and sclerotic institution proves unbendable to even the most charismatic reformer. The remarkable period this film portrays, although it took place less than a decade ago, already seems like ancient history.