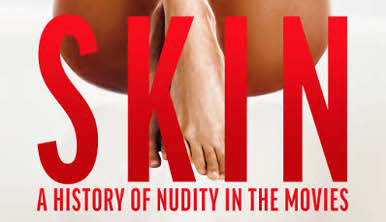 Ryan: So the times in which we find ourselves make watching a documentary like Skin a different experience than it would have been, say, ten years ago. Watching several upper-middle-age white men talk about, predominately, female nudity in the history of film carries some significant baggage. The film walks a fine line between the lecherous and the educational. Did you find anything “redemptive” about it?

Richard: The history of nudity in the silent films was quite good. Audrey Munson, the starlet who posed nude in various “artistic tableaus” of the silent screen was truly a tragic figure. The various “scandals” surrounding her, mostly involving men who committed crimes because they thought they had a right to her body, caused her to attempt suicide, and she spent the rest of her life institutionalized until she died at the age of 104.

The film also does about as good of a job explaining the evolution of the Hollywood Production Code as any documentary I’ve seen. One of the commenters makes the excellent point that “Pre-Code” really refers to the time between when the Code was proposed, in about 1930, and when it was enforced, about 1934.

Ryan: Agreed. Much of the film, specifically clips from the films of the era you bring up, reminded me of what I loved about our time at the Graduate Theological Union, immersed in studying the history of film and being, almost daily, blown away by scandalous elements (or coded messages) that were part of classic biblical epics that even the most conservative religious viewers embrace.

Richard: Of course, Skin features some classics of the religious epic genre that you and I are familiar with: Intolerance (1916) and The Sign of the Cross (1932). The giant milk bath scene with Claudette Colbert, kittens licking at the edges of the pool, still stands as a testament to Hollywood decadence. Nobody could use the Bible to undress a woman like Cecil B. DeMille.

As you and I discussed, having mostly middle-aged white men opining on naked women in film gets creepy after a while. Having Malcolm McDowell and Pam Grier as two of the interview subjects makes for interesting viewing, but really, they needed more women film experts and more people who were not white.

Also, there’s little discussion about the ultimate taboo, which is full male nudity. Male genitals for more than a few seconds on the screen will get you an NC-17 faster than all the women’s breasts in the world. The film doesn’t unpack the dynamics of male nudity at all—that the “male gaze” of film leads to an uncomfortable homoeroticism when a man is naked on screen. At the same time, despite the Hollywood rating system’s prudishness, putting women’s bodies up for show still fits within “normal” moral bounds, and so it gets an R rating. A classic example is Call Me By Your Name, where there is more female nudity than male nudity, despite the main feature of the film being a gay male romance.

Ryan: Absolutely. More women and more academic reflections on these depictions and hypocrisies would have been hugely beneficial. Skin made me think of another documentary that I often used in teaching courses on the history of film and religion, Kirby Dick’s This Film is Not Yet Rated, in which he explores the Motion Picture Association’s archaic ratings system, so much of which is driven by immature and irrational approaches to biology and human sexuality. As is well known, our ratings system (unlike that of other countries) penalizes depictions of nudity, sex, and sexuality, while giving a free pass to films that bathe themselves in bloody violence.

Richard: Skin highlights a depressing reality about American culture, which is that when it comes to sexuality and nudity in media, we seem to be stuck at a middle school level of maturity. The portrayal of something as natural as a naked human body of any gender is still enough to evoke either complete outrage or embarrassed titters. Sexuality in American film is not treated like a normal part of human life, but as a burlesque sideshow: an opportunity for titillation, exploitation, or just plain violence.