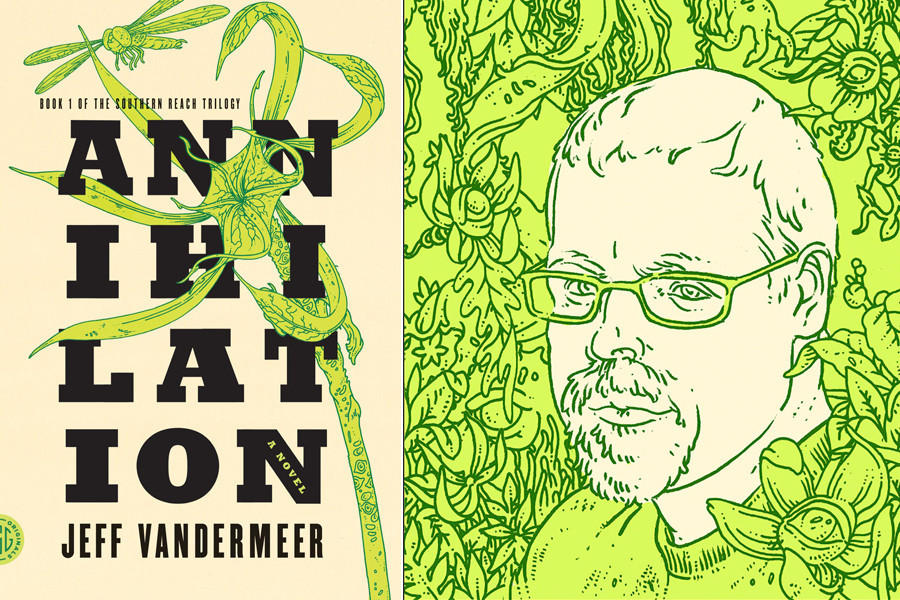 Most dystopian novels explain what went wrong right away and settle into a narrative of life in the aftermath. Jeff VanderMeer refuses to share this information in his novel, Annihilation, the first of his Southern Reach Triology. The next two will be published in May (Authority) and September (Acceptance). With Annihilation, VanderMeer creates one of the more haunting stories I’ve read in quite some time.

Questions abound in Annihilation, but one thing is certain: something terrible happened in the Southeastern part of the United States that radically affected life there. Though the environment is the subject of a massive coverup, a group (the government?) has sent eleven expeditions to explore the area to varying degrees of success. We join the twelfth, and most recent, expedition, a group of four unnamed women, a psychologist, anthropologist, a surveyor, and a biologist (the narrator).

They’ve been given scant (and possibly false) background information and meager weapons and provisions. The biologist quickly realizes that the psychologist has the ability to hypnotize the rest of the group and fears the implications of this. Almost from the start, the expedition is a failure. Two landmarks dominate the space, a distant lighthouse and an underground “tower,” and the group has competing opinions on what to explore first. At night, a horrifying moan from an unidentified source fills the air. When the team explores the underground tower, they find mysterious writing on the walls that has quite literally blossomed to life. The ominous writing has spiritual, and perhaps theological, implications that slowly drives most of the team crazy.

To say more about Annihilation would be to say too much because 1) I don’t want to spoil the experience, and 2) I’m not quite sure what the hell is actually going on. VanderMeer is a highly skillful writer who is able to convey bone-chilling terror and awe-inspiring beauty virtually in the same sentence. So much of dystopian narratives have been aimed at the YA crowd and is overrun with cliches. This one’s squarely for the adult crowd with reflections on love and relationships that are as equally insightful and disturbing as the evolving landscape in which these explorers lose themselves.

For fans of this genre, I can’t recommend this one highly enough.