Tom Bissell’s book, Extra Lives: Why Video Games Matter, is not only one of the best books written about video games, it’s one of my favorite works of nonfiction. So when I saw that Bissell had turned his attention and wit to the apostles, I couldn’t wait to read the results. It’s as insightful, biting, and funny as I had hoped it would be.

Over several years, Bissell traveled around the world to Jerusalem, Rome, Turkey, Greece, Spain, France, India, and Kyrgyzstan to visit the tombs of the twelve. So, in one sense, Apostle is also a travel journal, and it’s some of the best travel writing you can read, critical of others and self, but always, ultimately, kind and fair. These are certainly the more entertaining elements of his new book: looking for a bathroom in India, dealing with a demented driver in Kyrgyzstan, and random conversations with Western Christian tourists about religion and theology. 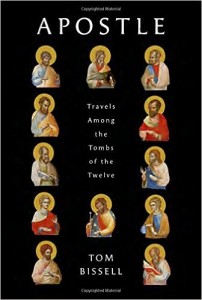 But Bissell is also traveling through millennia of Christian (and religious) history as he surveys the life and history of the apostles, their relationship to one another and Jesus, and how communities formed around and still revolve around them. A lapsed Catholic, Bissell occasionally brings his own experiences of religion to bear on this study, and these moments add some levity to his analysis, which is deep. Bissell proves to be just as well-read and thoughtful about these questions and issues as any traditional Biblical scholar or theologian I’ve read. He arrives at something of a two-fold conclusion, which echoes the work of Marcus Borg in many ways. The stories surrounding these apostles (and Jesus himself) and the ways in which they have been re-written over centuries are enough to preclude understanding all of this as factually true…as so many Christians desperately do. But, given their lasting mythology, and the power of story, does that matter?

Bissell writes, “Our primitive propensity toward faith begins as the tribal impulse to exclude, as the amplifier of genetically encoded fears. Yet anyone who derived meaning from art has no business claiming not to understand meaning derived from religion. Stories are part-time religions; readers are temporary fundamentalists” (361). I’ve long argued that we all live by a defining story, even the non-religious among us, who can be just as fundamental and evangelical as their religious counterparts. Bissell points to a secular naivete as well, reflecting on the construction of Medieval churches: “The peasants who lived in the shadows of these costly, otherworldly churches must have accepted all this as reasonable, just as we somehow accept that earning tens of millions of dollars for pretending to be Iron Man is reasonable” (298).

Bissell’s commentary on Christianity is vital at this moment in our culture and his departure into a chapter on Jesus is essential reading for anyone that takes a critical approach to their own faith. His discussion of the development of Trinitarian theology in an imperial setting is particularly damning: drawing on the work of Charles Freeman, he adds, “The Jesus of the gospels was in no position to justify the hierarchy of the imperial church. He had been executed by the Roman authorities and preached a coming kingdom in which the poor had an honored part. An indisputably divine and kingly Jesus served as a different sort of lodestar” (290). Centuries ago, believers re-made Jesus into an icon that fit their cultural and political needs, and we are still doing it today.

As Christians hold tightly to their theologies and ideologies, often-times wielding them like sledge-hammers, Apostle is a not-so-gentle encouragement to hold onto those beliefs less fiercely. Bissell writes, “In the end, that is what the gospels are: accidental autobiographies of the communities, and authors, that produced them” (352). Christians’ use of the gospels (and their reactions to Bissell’s commentary on them) are just as autobiographical.