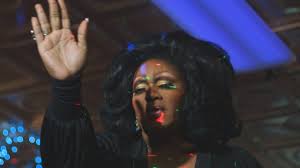 The Gospel of Eureka might be the most “American” film at SXSW this year, at least in its depiction of the diverse expressions of American Christianity and the way these shape our politics and culture. The film focuses on the small town of Eureka Springs, AK, which is home to The Great Passion Play and also an LGBTQ enclave of sorts. Directors Michael Palmieri and Donal Mosher don’t so much put these two communities into conversation with one another as they show the tenuous nature of their co-existence. Their documentary footage is paired with narration from trans performer Mx Justin Vivian Bond, who comments on the violent history of the place.

The Great Passion Play and nearby giant statue of Christ of the Ozarks is a tourist destination for evangelical Christians, although attendance is dwindling. The film offers behind-the-scenes footage of its productions as well as the theater’s director and the curly-haired actor that plays Jesus. While the play’s audio and dialogue is pre-recorded the cast emotes with great sincerity, resulting in a definitive example of Christian camp.

In The Gospel of Eureka, The Great Passion Play’s counterpart is the Eureka Live Undergrounddance and drag bar. Married couple, and devout believers, Lee Keating and Walter Burrell run the bar, which is home to a weekly drag show, whose performers lip-sync songs ranging from “Lick it Before You Stick It” to traditional gospel hymns. The sense of belonging and community here is undeniable. The male actors in the Passion Play all wear some form of makeup and perform. Many of them would be offended by the drag show. None of them seem to see the irony in this.

In the middle of these poles, the filmmakers find people of faith who reject conservative theologies that demonize homosexuality or reject LGBTQ members from full participation in the life of the church. As Walter says, “Christianity doesn’t have anything to do with who I’m fucking. It has everything to do with who I’m loving.” The film and these viewpoints are set against the backdrop of Non-discrimination Ordinance 2223, another bathroom bill that would make it illegal for businesses to discriminate on the basis of gender. The filmmakers find people of faith on both sides of the aisle. Conservatives that want to “protect their children” from predators and liberals who know this bill has nothing to do with predators or religious beliefs.

The Gospel of Eureka is a snapshot of America at the moment, a country diverse and dividing over every issue, hostile and hospitable all at once.