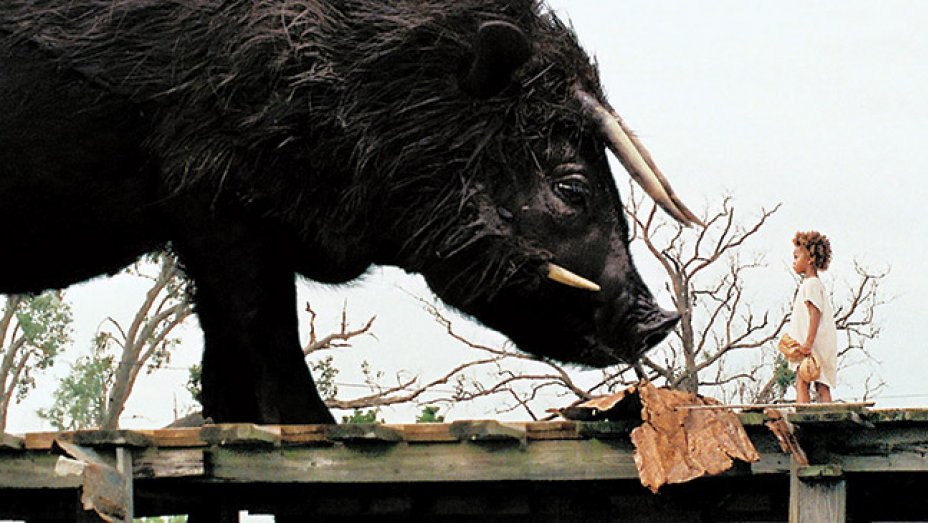 Every generation, by virtue of being born into a historical continuum is burdened by the sins of the fathers as it is blessed by the deeds of the ancestors. – Hannah Arendt

Sometimes a film acts as a benediction. You feel blessed for having seen it, and somehow more ready to face the reality life presents outside the theater. My personal circumstances make me especially susceptible to Beasts of the Southern Wild, a flight of magic realism set in Southern Louisiana. Somehow, seeing the squirming, buggy life of the parishes I will soon call home, set against rusted oil tanks, floating detritus, and tumbledown tarpaper shacks, casts a spell of beauty and resilience around this wondrous delta region that makes me less fearful of my impending move and more curious to explore.

The film won the Grand Jury Prize at Sundance, and the Camera d’or for best first film at Cannes. It was developed by a New Orleans film collective called Cinereach and directed by Benh Zeitlin, who also shares writing and composing credits. This is an important movie, destined for the National Film Registry as a film that is “culturally, historically, and aesthetically significant.” It captures something both specific to the Gulf region and nationalistically American. But it doesn’t weigh you down with its importance as you’re watching it. It just feels like a ripping good story.

The main character, Hushpuppy (Quvenzhané Wallis) is a six year-old African-American girl with wild hair and a fixed look of defiance. She has more moxie and self-regard than her impoverished circumstances should allow. “The world was made for us,” she confidently asserts. And, wise beyond her years, she repeats her philosophy: “The whole universe depends on everything fitting together just right. If one piece busts, even the smallest piece… the whole universe will get busted.”

In this case, the pieces falling out of place have consequences that are truly monstrous. The melting of the Antarctic ice cap has led to the release of giant prehistoric porcine creatures called “aurocs” that are marching their way to where Hushpuppy lives. Their immanent arrival is a continuing mythological embodiment of doom that hangs over the events of the movie.

Hushpuppy lives with her alcoholic father, Wink (Dwight Henry) in “The Bathtub,” a bayou community that has been cut off from the world by a levee and by ecosystem-destroying industry. The Bathtub people are self-sufficient, living off the bounty of the Gulf and observing their own holidays, rituals, and myths. The community always lives on the edge of crisis, with the next melting polar icecap or the next big storm threatening to leave The Bathtub underwater. Their response? Laissez le bon temps rouller— party harder and play the music louder—survive the deluge by taking care of each other.

The film has a palpable air of apocalypse, but with its use of the giant tusked prehistoric arocs as harbingers, it telescopes history from the end of the world to the Edenic beginning. This is a classic apocalyptic move, as witnessed by Revelation Chapter 12, the “War in Heaven” which uses both futuristic and primitive symbolism as the serpent of Eden is named for the first time, “That ancient serpent, who is called the Devil and Satan,” who must be cast down and destroyed in order for the justice of the Lamb of God to reign.

If Hushpuppy is a precocious Southern child in the mold of Huck Finn, Wink is an irrational, self-destructive addict in the mold of Huck’s father Pap. Drunk and careening around his shack, he nevertheless tries to imbue Hushpuppy with a toughness she will need to survive her harsh environment. Every once in a while, the veil of the child’s-eye magical point of view we share with Hushpuppy parts and we realize that the “end times” she is experiencing are in part a projection of her father’s dying. Apocalypses tend to be personal this way. When someone starts shouting about an impending apocalypse, it’s always a good idea to ask, “Who’s world is ending?” and perhaps as tellingly, “Who’s world is beginning?”

Wink continually addresses Hushpuppy in masculine terms, encouraging her to show off her “guns,” (arm muscles) telling her one day she’ll be “King of the Bathtub,” and challenging her to feats of strength while yelling “Who the man!” He teaches her everything he knows about fishing and finding food, including a rather hilarious lesson in clubbing catfish.

Hushpuppy resists the usual cultural dualities of maleness and femaleness. At no point does Wink seem to wish Hushpuppy was born a boy; he just relates to her as he would a child for whom he feels responsible. Hushpuppy fulfills the “traditional” female role of being in touch with the earth, literally listening to the heartbeats of birds and other animals she catches; but she also fulfills the “traditional” male role of the hero and adventurer of the story. Something about the muddy, swampy world in which she lives and it’s pressing necessity for survival blurs the cultural imperatives of gender.

The film is a gorgeous piece of cinematography, as the watery byways, wriggling seafood, and raucous celebrations of The Bathtub shimmer and sparkle with brown-golden light. We’ve reached the point where digital filmmaking is every bit as textured and beautiful as old-fashioned stock.

The photography adds to a film that is steeped in a sense of the mythological. In addition to the Judeo-Christian mythology, the film has bits and pieces of other ancient stories. At one point, Hushpuppy and some other children head out swimming across the water to find their mothers. They are picked up by a Cajun Charon figure, who ferries them to the other side—to a dance hall and brothel fittingly called the Elysian Fields. The aurocs, once they arrive, are fierce, but somehow in Hushpuppy’s presence, benevolent. “You’re my friend, kind of,” the tiny girl tells one of the giant beasts, and it listens to her.

There are people who will misread this film as a paean to libertarianism, the poor being without need for government assistance or medical help–as though the squalor we see them living in is ennobling. That would be a misreading of the film’s communitarian impulse. As Hushpuppy’s philosophy makes clear, independence is only possible through interdependence. This idea suffuses the whole approach of the collectivist filmmakers, who found their lead actress in an elementary school in Houma, Louisiana, gave art college students the opportunity to create the visual effects, and even credit the animal “auroc performers” by name.

Hushpuppy seems to be the embodiment of the Arendt quote, recognizing herself as a being but a small spark on the continuum of history (albeit a bright one.) As she says at the end of the film, summing up its spiritual ethos, “When it all goes quiet behind my eyes, I see everything that made me flying around in invisible pieces…I see that I am a little piece of a big, big universe, and that makes it right.”

Some much-needed perspective in the face of our daily apocalypses.