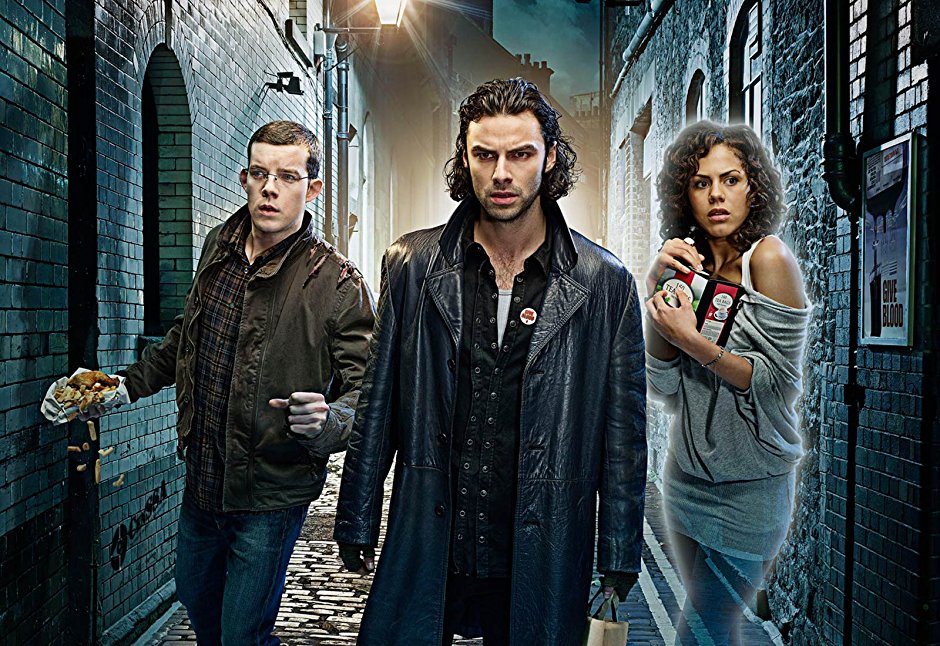 How can one who has not yet become human become God? – Irenaeus of Lyon

Joining the nearly endless procession of vampire/supernatural thrillers these days is a BBC production, Being Human, about a ghost, a vampire, and a werewolf that live together as housemates in Bristol, England. (As you do.) The first season or “series,” as they say, is out in America on DVD this summer, and Series 2 is currently being shown on BBC America.

The show has a smaller budget and range than the Alan Ball HBO vampire extravaganza True Blood, which ultimately makes it more fun and less daunting to get into. (None of this, “I am the Queen of Mississippi…” “But I am the King of Alabama…” “But we must respect the Vampire Authority!”). In the British series, the vampires have been infesting the port town of Bristol for a few hundred years, but keeping a low profile. Mitchell (Aidan Turner) a handsome Irish vampire “recruited” during World War I, used to be their hero but now has decided to go cold turkey on the blood feeding and re-integrate himself into humanity–hence the housemates.  George, played by History Boy Russell Tovey, is a nebbishy Jewish/British sort of werewolf, who is dreadfully ashamed of the condition that causes him to sprout hair on his palms when it’s “that time of month.”  Annie (Lenora Crichlow) is the ghost that hangs out in, or haunts, the house–because she died there.

The story arc features less of the elaborate but careful plotting of recent sci-fi/fantasy shows like the aforementioned True Blood, or Battlestar Galactica, or Lost. The vampires in Being Human have big plans for world domination, but seem not to have advanced much beyond a small fraternal order with their own clubhouse in a defunct funeral parlor.  Several of the longer story threads build great tension without much of a payoff. One particularly unsatisfying confrontation between vampire and werewolf in the last episode results in a badly-drawn supernatural standoff with unarmed opponents. Could no one have thought to bring a wooden stake or a silver bullet?

Other aspects of the low budget turn out in the show’s favor.  The special effects are kept to a minimum, with the producers choosing prosthetics and puppetry over CGI, which actually works out as a refreshing homage to the low-rent history of the monster genre.  And because they don’t have as much to go on in the way of effects, the cast does what the Brits do best, which is act.  No one can chew scenery like British character actors, and the head vampire Herrick (Jason Watkins), his lackey Seth (Dylan Brown), and the hideously abusive Owen (Greg Chillin) stand out as some richly performed bad guys. The main characters are an earnest and likable group of young people. (They made a well-received appearance at Comic-Con this July.)

The show works best when the parallels between the monster world and the real world become explicit–the title, “Being Human,” says what it’s really about.  Mitchell’s bloodlust is a metaphor for addiction, as he struggles against a desperate bodily need, and sometimes falls off the wagon with destructive results.  George’s inner wolf is a grand foil to his outer orderly exterior.  (As Mitchell says, “I can never tell if you have Jewish shame or werewolf shame.”)  Perhaps the most poignant condition is expressed in the ghostly Annie as she embodies (or disembodies) the diminution of a soul crushed by spousal abuse.  Society gets its comeuppance in one episode where the townspeople turn on the roommates not because they are monsters, but because of a spurious accusation of child molestation.  And two of the characters have romantic relationships complicated as much by their fears of intimacy as their supernatural conditions.

There is a brief religious subplot when a hospital chaplain is called to check in on the wounded Mitchell.  Rev. Mark (Michael Begley) offers to pray for him, and George says, “I don’t think that’d be a good idea.  I’m Jewish, and he’s, well, complicated.”  (The vicar responds, “Jewish people pray, I’ve seen Yentl.”)  Rev. Mark gets used as a kind of human garlic bulb when the vampires try to come for Mitchell and George.  I’ll say this for the vampires, they’re good, ecumenical vampires who are as offended by George’s Star of David necklace as they would be by a cross.  Rev. Mark later gives George some advice from I Corinthians 13:11:  “When I was a child, I spoke as a child, I understood as a child, I thought as a child:  but when I became a man, I put away childish things,” which becomes important for George’s development as a character.

The show is not so much religious as mytho-poetic.  The monstrous conditions of these very human characters represent what Carl Jung would call the “shadow,” that part of the personality that a person finds the most terrifying or shameful part of one’s self.  Ultimately, the shadow must be embraced and accepted, without being allowed to dominate or destroy, in order for us to become integrated human beings.  When I became a man and thought like a man, I found this explanation of human darkness more convincing than the orthodox Christian explanation of Original Sin.  The idea that we project all of our human darkness onto the sacrificial Christ rather than facing it and integrating it; the idea that we must grovel for forgiveness for what is an evolutionary component of our being; the idea that our culmination as persons would be dying and excising this necessary part of our human experience like a malignant tumor; started to strike me as, well, childish.  As George says to Annie when she confesses that she wants to get revenge on the man who killed her, “It’s human. Not everything about being human is nice.”  I’ve come to accept that about myself and come to believe in a God who wants me to embrace the totality of what I am–monsters and all.