In my reflections on the first season of Bloodline, I highlighted themes of unresolved grief, guilt, and the desire for revenge. I also argued that Danny (Ben Mendelsohn), the black sheep of the Rayburn family, functioned equally well as a ghost that haunted the family and a sacrificial lamb on which the family projected their fears and failings as he did an actual real, living character. While the second season “corrects” some of my misreadings of Danny’s intentions on returning home in the first season, it continues to build on these integral themes while adding another vital issue, the importance of and need for confession in our lives.

Bloodline‘s second season picks right up where the first left off. Danny’s son Nolan (Owen Teague) shows up, throwing the Rayburns into further disarray. In his flashbacks, we learn more about why Danny returned and what he was up to during his time away. Shortly after Nolan’s arrival, his mother Eve (Andrea Riseborough) and her boyfriend Ozzy (John Leguizamo) arrive. While Nolan seeks answers to his many questions, his “parents” are motivated by revenge. For Ozzy, Nolan and Eve are his Golden Ticket into the party. 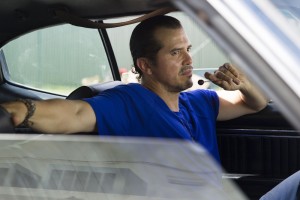 Danny’s murder still weighs on the Rayburn children, driving a wedge between John (Kyle Chandler) and the rest of his family. It keeps Meg (Linda Cardellini) away in New York, buried in her work and drinking too much, and fuels Kevin’s (Norbert Leo Butz) dysfunction and addiction. They try to carry on in normal fashion, but the ghost of the past won’t let them. John runs for sheriff, in part, because winning that election means he could squash Marco (Enrique Murciano) and Aguirre’s (David Zayas) investigation into Danny’s murder. This brings Meg back to the Keys to help with the campaign. Kevin, hitting rock bottom while ruining the “out” that John orchestrated for the family, goes into rehab and pursues options to save his boatyard.

If all William Faulkner ever said or wrote was his famous quip that “the past isn’t dead, it isn’t even past,” that would have qualified him as one of America’s most astute cultural critics. This idea is on full display here in Bloodline, as the series shows that the past cannot pass unless we are willing to make confession. As long as John holds on to his secret(s), they eat away at him like a cancer. No amount of work (Meg) or drugs and alcohol (Meg, again, and Kevin) will make it disappear. 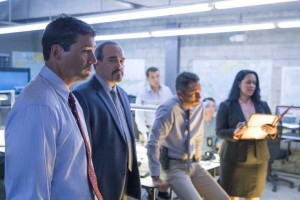 The scenes in which Danny revisits John to feed on his guilty conscience are some of the series’ best, with Mendelsohn and Chandler delivering some of their most effective performances, the latter’s often in complete silence. In one of these scenes, Danny tells John that there is a way out, confession, but that it would be a son-of-a-bitch. Because confession never just means confession. Guilty parties must face justice and make restitution, which, for John, would potentially mean losing everything for which he’s ever worked.

Although there are multiple moments of confession throughout the second season, none are undertaken to bring about resolution. When characters do confess, it’s often to keep themselves out of trouble, and they often build more lies on top of past transgressions. Perhaps the best moment–and the one that shows just how difficult confession can be–is the first time that Kevin speaks up at AA. He doesn’t tell everyone his family’s past, but he starts. There’s a real turnaround in his life after that, a sense of energy and determination to walk a straighter path. Of course, his actions in the finale throw him right back into the fire.

The second season of Bloodline keeps the narrative and performances at the heights to which the final three episodes of the first season had finally risen. The new season gets off to a much quicker start and weaves a tight, complex plot. The additions of Leguizamo and Riseborough strengthen an accomplished cast, and the Keys are still an alluring locale here, even if most of the proceedings take place in the dark. As one viewer commented on Twitter, “I wish someone would turn on a light!” There doesn’t seem to be much light on the horizon for the Rayburn clan as the third season seems posed to plunge them deeper into the darkness.

All episodes of Bloodline are streaming on Netflix.