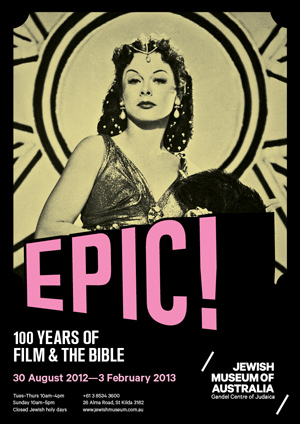 On short notice, I was given the opportunity to contribute an introductory essay to an event surrounding an exhibit of Father Michael Morris’ biblical film poster collection. The exhibit, called Epic! 100 Years of Film and the Bible, was showing at the Jewish Museum of Australia in Melbourne. The event was part of their “Midsumma Festival,” and focused specifically on LGBT interpretations of the Hebrew Bible. Many of my students and colleagues have heard my lectures or descriptions of my dissertation dealing with camp and queer elements of Hollywood biblical films. This essay is one of the best short summaries of my scholarship on this issue. (Thanks to my friend, mentor, and former adviser Michael Morris for pushing me to do this!)

The Camp and Queer in Hollywood Biblical Epics

A story, often repeated in film history circles, and cited by the comedian himself, places Groucho Marx at the premiere of the 1949 Cecil B. DeMille epic Samson and Delilah. Posters of the massive, bare-chested Victor Mature served as the visual backdrop for anyone entering the theater that evening. After the movie’s debut, DeMille asked Marx what he thought of the film. To the director’s consternation, Marx replied, “No picture can hold my interest where the leading man’s tits are bigger than the leading lady’s.”

The quote is more than just a quip: it reveals something about the innate discomfort of the biblical epic for the heterosexual male. Lured by the promise of Hedy Lamarr in the most revealing and diaphanous costumes of the great designer Edith Head, a straight man watching Samson and Delilah would be confronted with 128 minutes of an even-less-clothed Victor Mature.

If, as Laura Mulvey proposed in her seminal 1975 essay, “Visual Pleasure and Narrative Cinema,” the standard Hollywood “gaze” is heterosexual male, directed toward the gazed-upon female, then the genre of the biblical epic poses a peculiar, one might even say queer, problem. In the biblical epic, the body of the male, stripped to a loincloth, or clad in muscular but decidedly short-skirted armor, is as gazed-upon as the female. The prospect of an archetypal male gaze staring at the muscular bodies of Victor Mature, Charlton Heston, or Yul Brynner suffuses these films with homoeroticism—a decidedly gay male gaze. Furthermore, once the heterosexual, male-oriented machinery of the gaze is broken, it frees up the possibility of a female “gaze” as well—directed at the beefy male specimens on the screen, or at the delicious lesbian-femme fantasies of Hedy Lamarr, Anne Baxter, and Gina Lollobrigida.

Some of the queer subtext of biblical epics comes not from the sexual desirability of the main characters, but from the films’ aesthetic of camp. Camp, a sensibility of theatricality taken to extremes—sometimes knowingly, sometimes unknowingly—has long been a reading strategy of queer audiences. It takes an audience with an eye for the decadent and a gift for seeing double meaning to understand the subversive possibilities of a film like DeMille’s The Ten Commandments of 1959. The picture claims to be a straight-ahead portrayal of the Exodus story, yet contains a love triangle between Moses, Pharaoh, and the Princess Nefretiri. Whatever the excesses of modern translations of the Scriptures, one could look in vain for years without finding a biblical reference for Nefretiri’s line to Moses in the film: “Oh Moses, Moses, you stubborn, splendid, adorable fool!” Or, referencing Moses’ experiences with God on Mount Sinai: “I don’t believe it’s only the thunder of a mountain that stirs your heart!”

Within The Ten Commandments, one even finds characters that fit the camp mold often assigned to queer persons. One example is the master builder Baka, played by Vincent Price. A villain in the story, Price plays Baka as a camp virtuoso—one with a refined understanding of the camp arts of cosmetics, decoration, and artifice.

When he kidnaps the lovely Lilia, (1.) a Hebrew slave girl played by Debra Paget, and takes her back to his palace, we fear for her virtue. We needn’t have. We find his first act on absconding with this beautiful girl is to place her on a pedestal and begin dressing her in a fabulous gown. (2.) Baka is clearly familiar with the finer points of fabrics and textiles, as he tells her, “Did you know my dear this golden web was spun from the beards of shellfish?” and he corrects the women dressing Lilia as they drape a red scarf over her, “No, no, no, no, no! Not red with the samule gown.”

It is then that the lovely Lilia is rescued by her boyfriend, Joshua. Yes that Joshua, the eventual successor to the leadership of Moses, who at this point is a young, strapping stone cutter played by John Derek. Baka captures Joshua and soon has the shirtless slave strung up, ready to whip in a blatant display of S&M villainy. (3.) He even sensuously places the whip over Joshua’s neck, and, examining the bulbous tip of the whip’s handle, says, “You’ve seen me drive my chariot. I can pick a fly from my horse’s ear without breaking the rhythm of his stride.”

Baka’s perverse pleasure in dressing women and whipping men marks him as a queer character. But in 1950’s Hollywood, this kind of perversion had its price. (4.) Just as the whipping of Joshua has commenced, Moses, played by Charlton Heston, comes to the rescue and kills Baka by strangling him with his whip. Baka, for all his political power, can barely put up a fight against the shirtless, manly Moses.

In other words, the subversive secret of the queer and camp elements of biblical epics is that they are what make a film seem biblical. The great pageant of ancient history calls for men of superhuman strength and women of blinding beauty. The Hebrew people, with their stately law and loyalty to one God, must be set apart and purified from the depravity of the world around them. But no need to hurry. Before Moses comes down from the mountain, there can be plenty of scenes of debauchery at the feet of the golden calf.