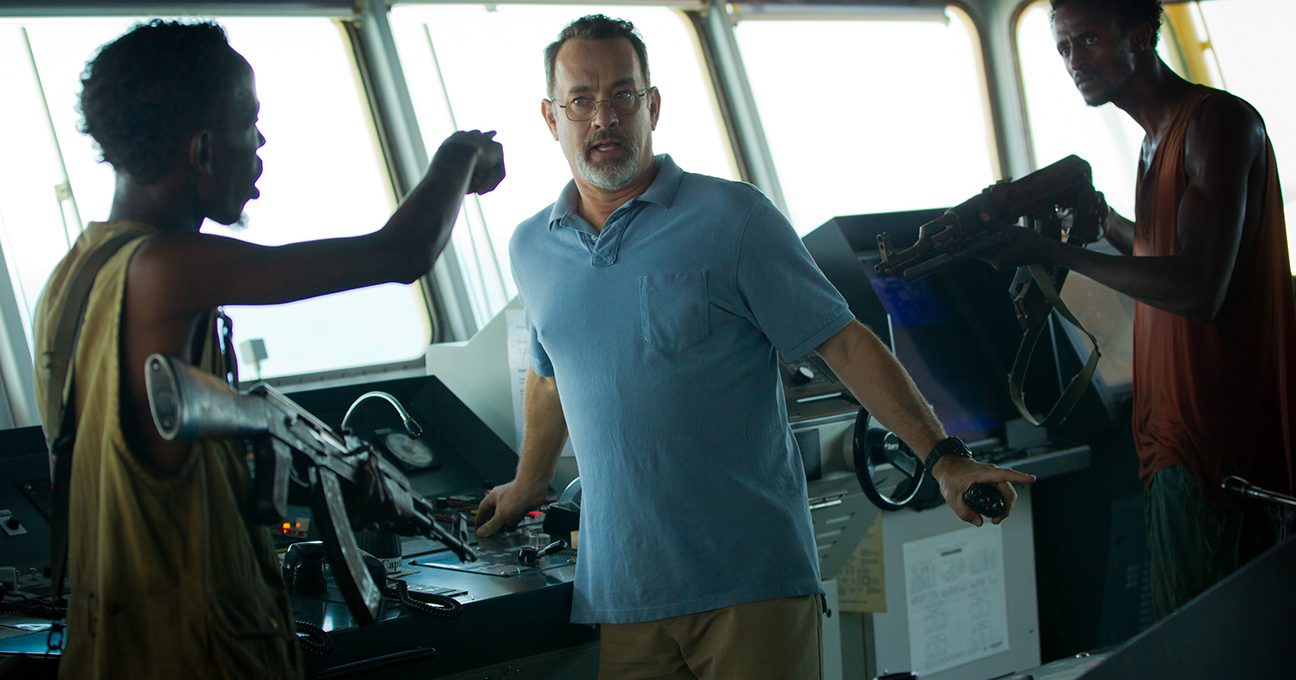 If you pay attention to film reviews or watch SNL, you’ve seen that scientists have taken shots at the logistics of Gravity. Captain Richard Phillips’ crew members have pointed to inaccuracies in the film that bears his name. These criticisms embody something of the “little t”/”capital T” truth debates in which religious and theology folk often participate. Are these films (or stories in scripture) factually true? Who cares. Are they True? You bet. Captain Phillips, though boasting a nerve-wracking action plot, is a deeply thought-provoking drama that sheds light on truths about the world in which we live.

Captain Phillips recounts the 2009 Somali pirate attack on the crew of the Maersk Alabama, helmed by Captain Richard Phillips (Tom Hanks). The film follows their days-long ordeal in which a band of Somali pirates, lead by Muse (Barkhad Abdi) and Bilal (Barkhad Abdirahman), board the ship and hold Phillips and and his crew hostage. The crew manages to hide in and booby-trap the lower deck to protect themselves. Shortly after they board the ship, the pirates’ plan falls apart spectacularly. Muse would take Captain Phillips’ offer of $30,000 and a way out, but Bilal takes Phillips as a hostage when they flee on the lifeboat.

The Alabama crew signals the Navy, who promptly sends out the big guns, three heavily armed warships, that eventually catch up to and surround the lifeboat. Phillips knows what the pirates don’t: there’s no way the American Navy will let them make landfall. They’ll kill Phillips in the process of stopping them if need be, because, after all, we don’t negotiate with terrorists. Thankfully, it doesn’t come to that…for Phillips at least. A group of Navy Seals determine the layout of the lifeboat and Captain Phillips’ location in it. Navy commanders fool Muse into participating in negotiations with the American government and Somali tribal leaders. After several tense hours, Navy Seals kill the three pirates in the lifeboat and rescue Captain Phillips.

Like nearly all of his films, director Paul Greengrass gives us another narrative that moves relentlessly forward, no small feat given the fact that the main characters spend most of their time trapped in a small lifeboat. Yet this time in confined spaces gives him the ability to ramp up the emotional impact of the narrative by strengthening the bonds both between the characters themselves and with the audience. The film benefits from stellar performances from its two leads, Hanks and Abdi. Hanks turns in one of his best roles so far as the everyman who survives great trauma. The final minutes’ of his performance are worthy of any Oscar consideration that will surely come his way. A newcomer to the big screen, Abdi is every bit as equal to the task. He plays Muse as a tough but gentle soul who seems to be wrapped up in mob mentality, borne away on a wave of hopelessness that breeds violence. His inability to recognize both the failure of his efforts to take over the Alabama and his ultimate deception by the Navy is heartbreaking.

If Captain Phillips muddles the facts of the event, perhaps it is because it is focused on doing something else, namely revealing the tensions and disparities between the First and Third Worlds. When Phillips confronts Muse about his choice of occupation (pirate), Muse tells him it’s either that or a fisherman. Unfortunately, Western fishing conglomerates’ over-fishing leaves coastal Africans with precious little natural resources on which to live. If you’ve watched any of the recent nature documentary series, you’ll know this is having negative effects on the larger environment as well. When you’re faced with precious few career choices, piracy might be a viable option, even if, as Muse and Bilal’s situation suggests, you have to report to less than generous authorities.

The film does a fine job of not over-playing its political hand and, instead, focuses its attention on more intimate, personal relationships, particularly the fragile connection that develops between Captain Phillips and Muse. There is no grandstanding here, but rather honest, highly emotional human interaction. It is clear that Captain Phillips cares for his captors and wishes them no harm. He tries and tries to present Muse and Bilal with ways out, but they stubbornly refuse to take them. When the Navy Seals finally kill Captain Phillips’ three captors, he weeps openly for both them and, no doubt, out of relief over being rescued.

As the film draws to a close, it raises several moral and ethical questions with which we continually wrestle. What is the value of human life? How much does the American government truly value it? Are some lives worth more than others? In many ways, the conversations that revolve around these questions are far more complicated than they need to be. Yet, Captain Phillips is that rare film that refuses simple caricatures of good and evil and forces us to question American economic and military presence abroad.

Captain Phillips (134 mins.) is rated PG-13 for sustained intense sequences of menace, some violence with bloody images, and for substance use and is in theaters everywhere.