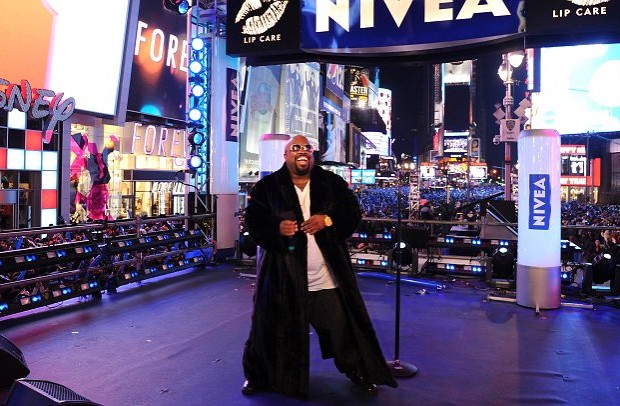 Richard Lindsay here: On New Years Eve, Cee-Lo Green made the mistake of crossing the aging hippy followers of John Lennon. The worst instincts of the Internet trolls were unleashed.

Perhaps you missed it in the midst of your New Years’ Eve revelry, but during a national broadcast of the Times Square ball drop, the singer Cee-Lo Green blasphemed one of America’s major religions. Singing John Lennon’s “Imagine” in front of thousands of drunken partiers with cameras trained on him from CNN and NBC, Green substituted words in the verse that reads:

Imagine there’s no countries
It isn’t hard to do,
Nothing to fight or die for,
And no religion, too.

Green’s interpretation of the final line: “And all religion’s true.”

This immediately set off a flock of angry twitterers, mobbing the former Goody Mob singer’s account with curses and invective. Typical responses from Twitter included:

@Austin McCarty: @CeeLoGreen All region is true = no religion is true.

@Occupylvcampout: @CeeLoGreen you don’t change the words to one of the best songs to what you believe go to hell fat boy I wish you a heart attack…

@Vegardkvaale: @CeeLoGreen who are you to change the words of a true artist. So fucking disrespectful and ignorant.

@SKYENICOLAS: @CeeLoGreen Look man, you’re nothing close to John’s intellect. You editing the song makes it a Pro Religion song and not a SECULAR song!

These critics seem unaware of just how religious their responses are. Other commentators used terms like “iconic” to describe the song, and “desecration” to describe what Green did to the song. They were essentially accusing Green of heresy against a system of spiritual beliefs that might be called “Lennonism.”

Lennonism sets itself against a perception of institutionalized, dogmatic religion, not the broader, less judgmental expressions of spirituality that have become part of the modern Western landscape. Surely Unitarian-Universalists would disagree with @AustinMcCarty’s assertion that all religions being true means no religion is true.

But whether using Thomas Luckmann’s suggestion of religion as a life-integrating discipline or Paul Tillich’s “matter of ultimate concern,” the responses to Green’s performance reveal the deeply religious meaning Lennon’s “Imagine” has for his fans. “Imagine” is the central creed of Lennonism. More than a pop song, it is a hymn to secular utopian spirituality.

Like the many evangelical Christians who misunderstand the American Founders’ deism as being compatible with their own theocratic agenda, some of Green’s critics seem to have equated Lennon’s song with contemporary “new atheism.” New atheists like Richard Dawkins or the late Christopher Hitchens believe in an aggressive rationalist or scientific materialism that would be pretty incompatible with the hippy utopianism of “Imagine.”

Lennon’s belief seemed to be more of an “anti-ism-ism” in which the lines of ideology would be erased in favor of a simpler and less-contentious mode of enlightened being. In the 1960’s, a time of heightened conflict between ideologies of Marxism and capitalism, nationalism and individualism, Eastern and Western religion, Lennon played the media trickster, subverting expectations of politicized celebrity opinion by promoting “bag-ism,” “hair peace,” and “bed-ism.” The solution-based striving of political and religious ideologies were replaced with slogans like, “Together we can get it together;” “War is over…if you want it;” and “All you need is love.” The idea was that the power you needed to change the world was inside you.

Furthermore, Lennon in the late 1960’s styled himself as a guru of this so-simple-its-obvious religion. The height of his spiritual influence was the Montreal Bed-in of 1969, in which Lennon and Yoko Ono took to their hotel bed for a week, and invited in counterculture celebrities, including Timothy Leary, Tommy Smothers, and Dick Gregory. Visually emulating the Beatles’ former teacher, the Maharishi, Lennon and Ono led the assembled disciples in the recording of “Give Peace a Chance.” It was the founding moment of Lennonism, the sacred moment of the 60’s that gives life to much of the nostalgic passion the Baby Boomers have for their rock-n-roll messiah.

What’s disturbing is how dogmatic the latter-day followers of Lennonism have become. Like many believers, after their founder’s death, they become unyielding in their faith in an attempt to show “true discipleship.” How perverted is it to lay claim to Lennon’s philosophy by telling someone to “go to hell fat boy I hope you have a heart attack.”

Cee-lo’s expression that “All religion’s true” is surely as innocuous (and ultimately impractical) as Lennon’s wish for no religion. Many of us share the ideals of peace and harmony Lennon and Cee-Lo were attempting to express, but believe that it’s only by capturing the spirit of the human religious impulse and using it for good that real peace will come about. This is a faith of addition instead of subtraction. Not “no religion” or “any religion you want” but belief in the transformative power of the most enlightened elements of religion. This is ultimately closer to Martin Luther King’s statement, “True peace is not merely the absence of tension; it is the presence of justice and brotherhood,” than a negative statement of eliminating peoples’ systems of meaning-making in pursuit of some nihilistic desert of anti-conflict.

Whatever you are, though, Lennonist, Cee-Lo Universalist, Christian, Jewish, Muslim, or Buddhist, by all means, let’s Give Peace a Chance. You can start by keeping it civil on your Twitter account.