I rarely put warning labels on reviews, but the new Vertigo series, Clean Room, deserves one. This is one of the most messed up series I’ve ever read, but I’m loving it. It’s not for the faint of heart or the easily offended, but if you’re up to a challenge, it can be an entertaining one.

Gail Simone’s Clean Room boasts two strong female characters in Astrid Mueller and Chloe Pierce. Astrid is the founder of a controversial, popular movement (cult). Chloe is a journalist whose boyfriend read Astrid Mueller’s book and, three months later, blew his brains out all over their newly-remodeled kitchen. Chloe takes it upon herself to find out why and, through sheer stubbornness, lands a meeting with Killian Reed, Astrid’s right hand woman (and ex-Mossad), and eventually a face-to-face with the boss lady herself. In their meeting, Astrid introduces Chloe to the Clean Room, a virtual reality environment that exposes a person’s greatest fears, guilt, regrets, and weaknesses. Within the first two issues, Chloe realizes that some of her worst suspicions were correct, but as the series progresses, she (and we) realize that the world is not what we think it is and that Astrid might be doing the world more good than harm.

In Clean Room, Simone has begun to weave a gripping psychological thriller and supernatural drama that shocks with every issue, thanks in large part to artist Jon Davis-Hunt’s adaptation of her troubling narrative. Throughout the first six issues, I frequently found myself pausing at length before turning the page out of dread over what I might see next. There are panels that are the stuff of nightmares and certain to inspire a few. I mean just look at this! 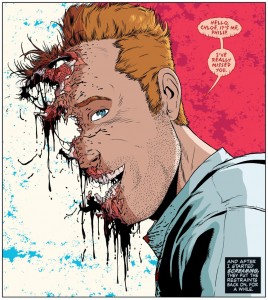 But the series isn’t all shock, awe, and gore. At its heart is a deeply emotional story about a young woman (and many other characters) attempting to process grief, guilt, and fear. Chloe’s search for answers takes her to places, both physically and psychologically, for which she isn’t fully prepared. Nor is Astrid an uber-villain, whose destruction we anxiously await. Issue 6 concludes with a twist that paints her in a completely different light.

Much of Astrid’s cult smacks of Scientology, especially with its beliefs that we aren’t alone in the universe. Fans of the new Hulu series, The Path, are sure to like this one as well, given that it’s not only about Astrid’s movement. If you read closely enough, you’ll see that Clean Room is also concerned with the ways in which we use religion, spirituality, and other belief systems to control others. Scary stuff indeed.

The first eight issues of Clean Room (Vertigo Comics) are available digitally and in print.