After a lengthy absence, Netflix’s critically-acclaimed series, Daredevil, returned for its second season last week. It sustains the gritty–yet beautiful–look of the first season and expands on its moral and religious themes. Where Matt Murdock/Daredevil’s internal struggle took center stage in the first season, this second season considers the dignity of the human person, even the most heinous criminals.

In the second season of Daredevil, Wilson Fisk’s (Vincent D’Onofrio) absence has left a vacuum in the criminal underbelly of New York. As gangs being to meet and discuss how to take advantage of this opportunity, they are slaughtered en masse. Police refer to an armed militia, but any fan of the series will quickly know it’s one man, Frank Castle, a.k.a. Punisher (John Bernthal), Daredevil’s latest nemesis. While he initially sounds like a Travis Bickle for the Netflix generation–a psychologically unhinged anti-hero on a quest to rid the city of its scum–he’s more complicated than that. Frank is a decorated war hero that has suffered unspeakable tragedy, the brutal murder of his wife and children and an attempt on his own life.

Alongside Punisher’s emergence is the return of one of Murdock’s (Charlie Cox) old flames, Elektra Natchios (Elodie Yung), which coincides with the rise of a powerful organization known as The Hand. They seek to take control of Black Sky, a weapon of unimaginable power. Daredevil and Elektra’s teacher, Stick (Scott Glenn), also returns, providing insight into The Hand, Black Sky, and Elektra. Murdock is quickly distracted by Elektra’s arrival and his duties as Daredevil, which frustrates his partners at Nelson and Murdock. Foggy (Elden Henson) and Karen (Deborah Ann Woll) are left to their own devices to defend the indefensible Frank Castle as he stands trial for multiple homicides. 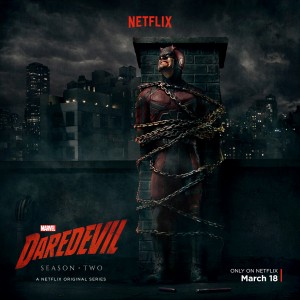 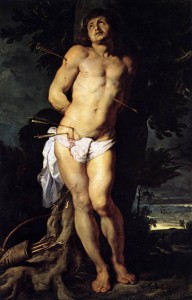 (Above, Daredevil, like St. Sebastian, is abused for forcing the powers-that-be to confront their sins.)

What makes the second season of Daredevil so interesting from the start–aside from the high production value and stunning cinematography–is its sustained reflection on the tension of whether humans are inherently good or evil. So much of Murdock/Daredevil’s actions in this second season seem to be motivated by Catholic social teaching on the dignity of the human person. Not only does Daredevil refuse to kill (even though his beat downs of the criminals of Hell’s Kitchen probably leave them wishing they were dead), Murdock (with Foggy and Karen) fights the death penalty that the State would inflict on Castle. He tells both Punisher and the State, “You don’t get to make that call.” Murdock, Foggy, and Karen even refuse to cop to an insanity plea, knowing that while Castle is broken, to do so would disrespect those who could actually resort to that defense.

Daredevil doesn’t just treat its villains with dignity through its lead character and his alter-ego. Father Lantom (Peter McRobbie), Murdock’s priest, gives the eulogy at Grotto’s funeral. In it, he claims that the death of an individual is also the death of an entire world…the loss of a whole web of connections. In a genre that dispatches “bad guys” without a second thought, this is a welcome pause. Even though Wilson Fisk and Frank Castle commit heinous crimes, they are never cardboard villains, but rather the center of webs that stretch in many directions. They both endure great trauma in their lives, Wilson as the child of an abusive home and Frank as a veteran of wars abroad and a victim of State-sanctioned violence at home. The series doesn’t excuse their actions, but it does attempt to explain them, and it also reminds us that we should take great care in how we talk about those who do–or would do–us harm. When Daredevil tries to reason with Punisher, he is forced to admit that he has never been to war. Punisher, a former Catholic himself, tells him, “Then don’t talk about it.”

Murdock’s greatest battle over the dignity of the human person might lie in his own internal conflict. He continues to question what he does: is he losing part of his humanity by being Daredevil? Is being the “half-measure” that Punisher accuses him of being enough? Later in the season, nurse Claire Temple (Rosario Dawson) reminds Daredevil, “You’re talking to someone who patches up the same three crackheads every night.” This is a lighter reminder of what Daredevil told Punisher, even the most hardened criminals deserve a second chance to be good…to attain redemption.

But while Murdock/Daredevil’s faith–in God and humanity–motivates him to do good, it also curiously blinds him to the ways in which others use a similar faith to wreak havoc on the world. The Hand places its collective faith in the Black Sky, but Daredevil dismisses all of this as a myth and fails to recognize that there are many others that would view his Catholic faith in the same way. Elektra and Stick try to convince him that what’s important is not whether the “myth” is true, but rather that people believe it’s true and are willing to do something about it. SPOILER ALERT: As Elektra learns that she is, in fact, the Black Sky that The Hand seeks to use, she sacrifices herself in order to keep them from bringing further destruction upon the city. In this way, Daredevil becomes a reflection on religious extremism and violence as a corruption of faith juxtaposed to the essence of all major faith traditions that call us to sacrifice ourselves in service of others.

All episodes of Daredevil are currently streaming on Netflix.