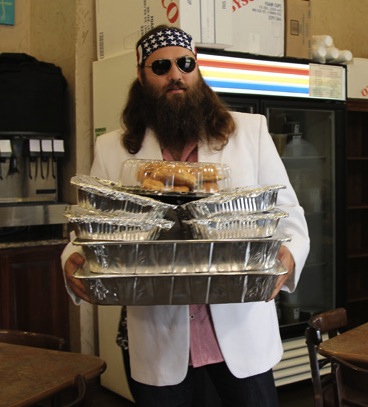 The Set-Up: The Duck Commander warehouse is infested with termites. As the place is fumigated, the boys move the office to Godwin’s house. Willie has to go off to be the luncheon speaker at Miss Kay’s Golden 60’s club.

Hilarity Ensues: The work brigade, led by Jase and Jep, ends up at Godwin’s house (because he has snacks). Sitting around in easy chairs and sucking on Fla-Vor-Ice popsicles lends itself to the usual intense Duck Commander “working” environment. As is customary, Si leads the cutting up, talking about the time he bought 100 double-stick popsicles, ate them all and threw up. “The rainbow don’t taste as good coming up as it does going down.”

Meanwhile, Willie has been roped into speaking at Miss Kay’s Golden 60’s luncheon. By Miss Kay’s calculation, the luncheon speaker is supposed to get the lunch. So Willie is sent off to pick up the casseroles with a batty lady named Carla, who insists on driving despite somewhat reduced reflexes. Despite Kay’s assertion that, “I know Willie and Carla are gonna be best buddies; like Simon and Garfunkel,” Willie is driven to distraction by Carla’s nonstop commentary about her medical procedures and her cats. As Willie says, “A trip down memory lane with Carla is really more like going around a loop.”

Back at Godwin’s, the crew opens up a box to discover he has inherited a stuffed “Jackelope” from his dead uncle. Si insists the rabbit with antlers is a rare find (and that he nearly shot one once), so they leave their hard work making duck calls behind and head to a taxidermist to get it appraised.

Is this for Real? Part of the genius of Duck Dynasty is that although the scenes may be scripted, it’s not hard to imagine the characters in these actual situations.

As the boys step into the taxidermist’s store, they’re struck by a stuffed deer with very life-like testicles. As Godwin says, “I wanna look away but I can’t.”

By the logic of hunting culture and the art of taxidermy (practiced only in rural areas and by hipsters in Williamsburg, Brooklyn) a stuffed deer with testicles makes perfect sense.

The taxidermist pronounces the Jackalope to be worth 50 dollars. “If he had testicles, it’d be another 100.00.”

This leads to an extended riff on Si’s new idea for a business. If testicles add that much value to a stuffed animal, why not open “Si’s Gonad Emporium?”

The Christian Angle: The religious element in this episode is a little more muted. One brief comment by Jase points to the continued theme of a universe ordered by God for the hunting of animals for food. When Jase sees a bullfrog mounted at the taxidermist’s, he says, “That’s not stuffed, that’s sacrilege.” It has been made clear in previous episodes that Jase sees bullfrogs as a delicacy provided by God.

The Wrap-Up: During the final scene of dinner with the family, Si is heard to say, “Willie, I’d like to ask you for advice about my new business. I’m thinking of getting into gonads.” Duck Dynasty is on every Wednesday at 10PM Eastern, 9PM Central on A&E.