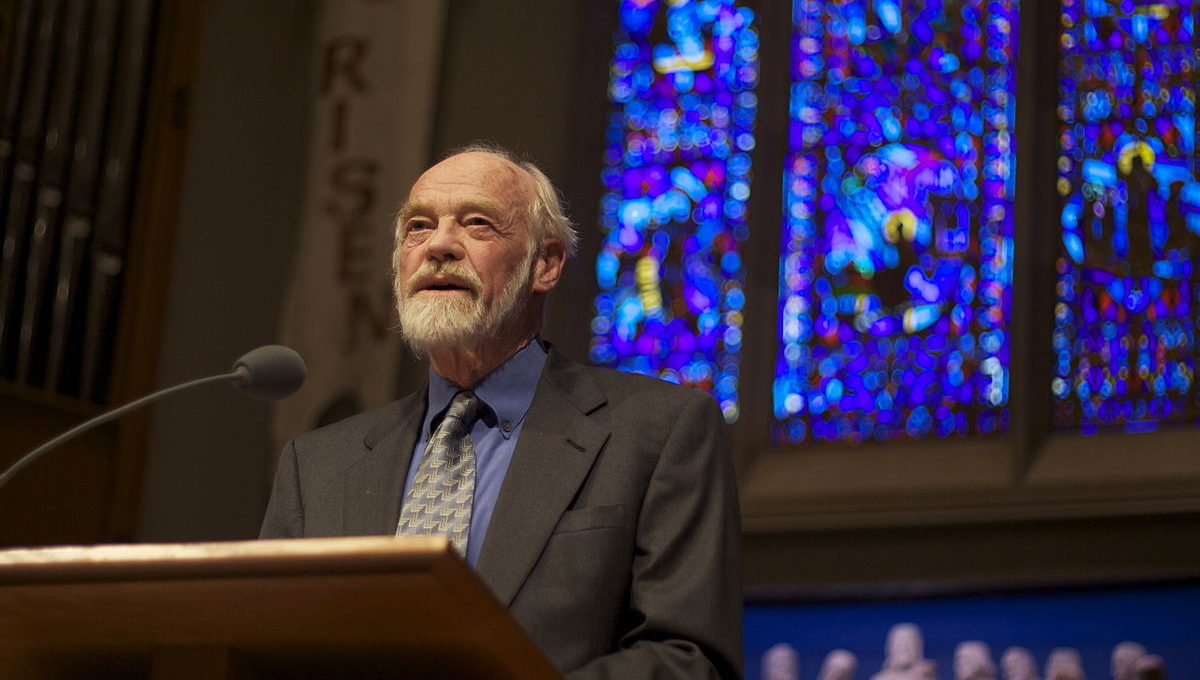 Controversy has recently engulfed Eugene Peterson, retired Presbyterian pastor and author of the bestselling Bible translation The Message for his statements about same-sex marriage. First he said in a Religion News Service interview that, if asked, he would preside over a same-sex marriage. This was a shock to many of Peterson’s fans. Although his books on spirituality are read by a wide spectrum of Christians, Peterson is generally considered an evangelical.

This sent shockwaves through a completely different set of believers—LGBTQ Christians who thought they had gained an important ally.

As a gay Christian with a husband, I’m having a hard time mustering outrage over my marriage being embraced, then rejected by this noted religious author.

First of all, let me say that support for marriage equality is of paramount importance—politically, religiously, and socially. Christian people and institutions that do not support marriage equality are failing to discern the movement of the Holy Spirit and are acting counter to the heart of the Gospel.

Peterson’s retraction is all the more aggravating for his allusion to a “Biblical view of marriage: one man, one woman.” There is no single, unchanging ethic of marriage in the Bible, and as a biblical scholar, Peterson should know that. Many of the figures in the Hebrew Bible, like Abraham, Jacob, David, and Solomon, were polygamists. In the New Testament, both Jesus and the apostle Paul suggested universal celibacy for Christians, with marriage as an option only for those who could not control their sexual urges.

But overall, Peterson’s retraction is pretty mild stuff. In his initial “yes,” he reacted as a pastor who would respond to the needs of real people that might be in his congregation. Even in his “no,” he was clear this was not based on a standing condemnation of LGBTQ people, saying, “They’d be welcome at my table, along with everybody else.”

He stood by his statement in the initial interview that said, “I wouldn’t have said this twenty years ago, but now I know a lot of people who are gay and lesbian and they seem to have as good a spiritual life as I do.”

This a long way from the toxic spew of condemnation of right wing Christians like Pat Robertson and James Dobson who have said LGBTQ people are literally responsible for natural disasters and the destruction of the American family. Furthermore, Peterson’s retraction is hardly comparable to international evangelists of bigotry like Scott Lively, whose statements that gay people “recruit” children have been used to enact regimes of terror on queer people Africa and Russia. It’s not even as bad as the teaching of the Catholic Church, which says homosexuality is “intrinsically disordered.”

Several commenters have questioned whether Peterson’s retraction was driven by profit, since the largest Christian bookseller, LifeWay, threatened to remove his books for his supposed sin against evangelical dogma. If that’s the case, shame on LifeWay for making opposition to same-sex marriage a doctrinal test for evangelicals. Peterson won’t go down in the social justice hall of fame for not standing up to LifeWay, but I find it hard to condemn an eighty-four year-old for protecting his source of income.

This whole incident gets at an important issue I’ve been meaning to take up with my fellow liberals: tolerance for people who are basically harmless, but just happen to believe differently from you.

I’d like to make a suggestion: If you’re saying, “I can’t be around somebody if they believe X,” the problem is with you and not with them.

You may have very good reasons to not want to be around people like that. As a gay man, there are certainly people whom I have had to distance myself from for my own mental well-being.

But we should never confuse chosen separation with being right. I continue to see my need to separate from people whose views are mismatched with mine as a failure of my own Christian principle to love my “enemies.” I can’t imagine for a second Jesus saying of any person, “I just can’t be around someone like that.”

As we take the measure of Peterson’s life—or that of any other individual—there are so many other things I need to take into account besides his political stances on issues I may care deeply about. Respect for elders. A lifetime of the hard work of pastoral service and care for others. Teaching and writing that makes the Scriptures come alive for many people. And grace. Grace most of all. The same grace I would want extended to myself.