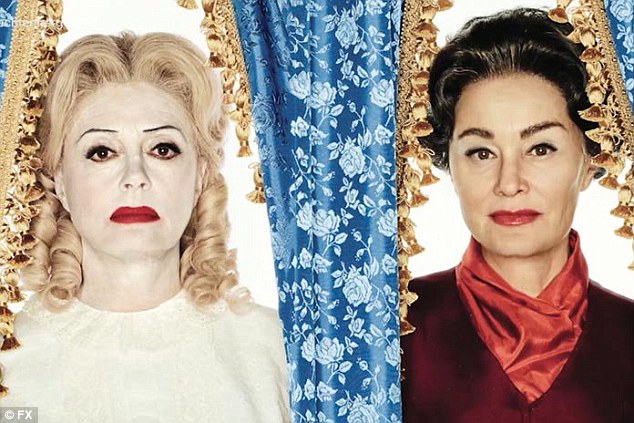 So far, Ryan Murphy’s Feud, featuring Jessica Lange as Joan Crawford and Susan Sarandon as Bette Davis, has delivered an entertaining take on one of the great rivalries in Hollywood history. One character in the show calls it a “feud of biblical proportions.” Which biblical feud she’s talking about I’m not sure. Cain and Abel comes to mind. Or perhaps the one between Elijah and the Prophets of Baal.

Murphy has to walk a fine line here. He has to deliver the goods on these two battleaxes chopping each other apart. (“Box office poison! Box office poison!”) But he has to make them sympathetic, too. And perhaps get at some of the reasons behind the feud. After all, as Joan’s latest beau, Peter, points out in the first episode, the two probably have more in common than anyone else in the world, so why do they hate each other so much?

Clues come during Joan’s initial meeting with infamous gossip vulture Hedda Hopper (Judy Davis) as she tries to get Joan to give an honest take on Marilyn Monroe. There can only be one “it girl” in Hollywood—only one goddess on the pedestal at a time. Joan replies that maybe it’s up to the women to try to chip away at the pedestal. But Hopper isn’t having it. She wants Joan to tear down Marilyn, and eventually she gets what she wants, with Crawford delivering one of her diatribes against the “sloppy young stars” who don’t know what glamor is really all about.

Feud tells the story about the making of Whatever Happened to Baby Jane? the camp/horror classic in which Davis and Crawford play two washed-up Hollywood old maids, living a reclusive and mutually-tormenting life. Not winning any new roles, and desperate for cash, Crawford very smartly sees the potboiler novel by Henry Ferrell as the perfect vehicle for a comeback. She pitches it to a B-movie, never-quite-made-the-big-leagues director, Robert Aldrich (Alfred Molina), who has become absolutely radioactive after his “Biblical” flop, Sodom and Gomorrah (1962). Both Crawford and Aldrich realize immediately that the only actress for the part of Baby Jane is Bette Davis, and thus begins a profitable but agonizing partnership.

Jessica Lange does excellent work as Crawford, showing the vulnerability behind the permanent mask of glamor, never moreso than when she lets drop the Texas twang behind her MGM rounded vowels. Lange plays Joan as an ambitious perfectionist, but a character with a deep maw of need to be loved and respected. She’s identifiable as an artist and a human being, as opposed to the Kabuki performance given by Faye Dunnaway in Mommie Dearest.

Susan Sarandon is currently on my prayer list (read: shit list) for her behavior during the election. But she does a reasonable impression of Davis. She has her fierce, eye-popping expressions and the impudent tossing of her hair. Davis was seemingly more in control of her need to be loved, and possessed superior and recognized acting talent (she was nominated for 11 Oscars and won 2). She addresses Joan by her given name, “Lucille.” A little flat as Davis herself, Sarandon really comes into her own when she dons the pancake makeup and flea-bitten wig to play Baby Jane.

The rest of the cast seems to be camping it up—and having more fun—than Lange and Sarandon. Judy Davis is a hoot as Hedda Hopper. Kathy Bates and Catherine Zeta-Jones do convincing impersonations of Joan Blondell and Olivia de Havilland, respectively. And Stanley Tucci chews the most scenery as a hideously misogynistic Jack Warner, pulling out the “c-word” before either of the women have a chance.

So far the show seems to be taking Crawford’s side, showing how difficult it was for her to construct her glamor day in and day out. As suggested in an issue of Screen Stories magazine in 1963, she saw glamor as her duty, and indeed her burden.

“When I was given star billing years ago I knew that the reason fans paid to see me was because I was supposed to be something different, something special; I represented glamor and make-believe and escape to them, just as a movie star should. … I was determined that these fans…would never see me in any way but as a glamorous creature. I’d never let myself be seen in public unless I looked the way they imagined me.”

She goes on to denounce young actresses that go around in slacks: “I think slacks are fine around the house or for hiking. But there’s no glamor to them.”

I’m not sure Crawford’s constructed feminine glamor has much use in the modern world, and it may ultimately be what held her and all the other women in Hollywood back. But I feel sorry for her that her life’s work came to nothing. What would she make of today’s “stars” who have no talent, no glamor at all–who are merely famous for being famous?