God in My Head: The True Story of an Ex-Christian Who Accidentally Met God by Joshua Steven Grisetti is a new Patheos book club book. I confess, when I started reading it, I almost put it down after a few pages. I’ve got a stack of books I’m anxious to get to, and somebody’s story about having a conversation with God during a drug-fueled trip to the dentist wasn’t the most compelling of the lot. But a funny thing happened as I continued to read, the book grew on me, and I began to appreciate much of Grisetti’s insight and, even more so, how his book and experience might be a tool for other Christians to think more seriously (and critically) about their faith.

Raised a Southern Baptist, Grisetti experienced several periods of faithlessness throughout his life, culminating in a round of atheism as a young adult. Grisetti also endured traumatic visits to the dentist every time he went to get a cavity filled (the nerves in his teeth were essentially immune to Novocaine). As he grew older, each trip to the dentist was more traumatic than the last until the dentist prescribed anti-anxiety medication, which Grisetti soon learned to mix with alcohol to heighten their effects. 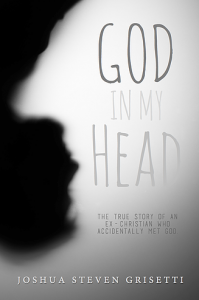 As a young adult, Grisetti took a potent cocktail of prescription meds, alcohol, and weed, sat in the dentist’s chair, and promptly entered into a 200-year-long conversation with God. The procedure took 45 minutes. In his conversation with God, Grisetti learns about all the biggies: the beginning of time, the afterlife, the purpose of life, sin, the implications of Jesus’ divinity for the rest of humanity, why there are so many religions, and a host of other theological themes. His recounting of this experience is frequently funny and occasionally moving and thought-provoking. Aside from a couple of cosmic insights relating to the afterlife and the creation of the universe, there’s nothing particularly revelatory here, especially if you’ve read any liberal or progressive theologians in the last ten to twenty years. But this isn’t necessarily a bad thing.

In the conclusion to his book, Grisetti speculates on what lead to this divine encounter: drug-fueled hallucination, near death experience, or other deeply-ingrained psychological explanations. Skeptic believer that I am, I imagine it was some combination of the three, rather than an actual encounter with the Divine, but I’m not going to bet the farm on that either. What is far more interesting to me (as someone raised Southern Baptist and who regularly experiences crises of faith) are the ways in which Grisetti fashions a new theology for himself almost wholly from the pieces of his former theological experiences. Almost every conclusion he reaches hangs on some re-interpretation of ancient Christian teaching. I also appreciate the humility with which Grisetti approaches these reflections. He writes, “In conclusion, regardless of all the fascinating things that God told me and showed me in my vision, none of it particularly matters” (178). Of course it matters, but what Grisetti wants his readers to hear is the voice of God at work in their own lives. Which brings me to a potential use of Grisetti’s book.

Drug trips aside, Grisetti’s experiences might be helpful for many more moderate or conservative Christians who are feeling constrained by traditional theologies or expressions of Christian faith. No matter the setting, most pastors are more liberal than their flock. They’ve traveled, read, and discussed religious and theological issues more widely. Grisetti’s book is a funny and relatively safe way to spark conversations with congregants and to push them past their comfort zones. But the practice itself might be more vulnerable. With God in My Head as inspiration, pastors could encourage their congregants to imagine what a conversation with God would be like. What questions would they ask Her? And, more importantly, what accusations would they want to level against Her? Of course, both these questions and accusations, like Grisetti’s conversation with God, will reveal just as much about the author as they do God.

And read an excerpt from the book at the Patheos Book Club here.