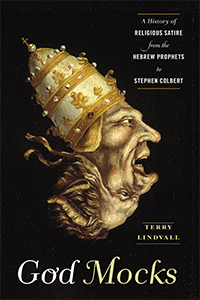 It’s no coincidence that my favorite ministers, pastors, and mentors have all had a wonderful sense of humor. It’s no surprise that those who tend to take a more literal view of scripture aren’t all that funny…after all, humor isn’t one of the fruits of the spirit listed in Galatians. Given the current religious climate in the United States, especially the vehement anger of so much of far right evangelical Christianity, one might be surprised to learn that Christianity has a rich history of satire, humor, and wit. Religion scholar Terry Lindvall mines this history in his latest book, God Mocks: A History of Religious Satire from the Hebrew Prophets to Stephen Colbert.

One of the most interesting aspects of Lindvall’s history is the diversity of satire in the Christian tradition with every sect and denomination having its star satirists and court jesters. We have a wealth of hilarious ancestors, and, as I read through Lindvall’s book, I repeatedly wondered where it all went wrong…or so serious. Our present state of religious satirists or quick-witted commentators on religion pales in comparison to this past.

Another point worth noting is the diversity of both the targets and purposes for which these prophets plied their trade. Satirists have taken on everything from idolatry, sexual immorality, and social injustice to heretics and hypocritical religious leaders to the rich and powerful and others that exalted themselves above their peers. In doing so, they intended to achieve moral reform, entertain their audiences, or a combination of both. Everything is fair game, as Lindvall points out: “[…If] God allowed the scoffing of his son on the cross, might he not allow any and every form of mocking” (274).

The lack of a good sense of humor might be one of the core emotional and spiritual defects that leads to so much of the religious violence in our world today. There is a seriousness at work today among large swaths of Christianity that is threatening to ruin us. As such, God Mocks should be required reading for all ministers and religious bloggers that regularly speak or write with the Bible in one hand and the newspaper in the other. I can think of no author better suited to write this book than Lindvall, who is as funny as he is insightful as he leads his readers through this raucous history. More than ever, we need wise, insightful satirists and ministers and writers who aren’t afraid to not take themselves so seriously, and God Mocks provides them with a fount of inspiration.

In the end, Lindvall points to an almost eschatological promise: “Here is the great triumph of the satirist, when the victim and the perpetrator become one, and the latter joins the former in the confession of a need for moral reform, all the while laughing” (282).