Known for over-the-top action and gruesome violence in series like Kick-Ass, Hit Girl, and The Secret Service: Kingsman, it might come as a surprise that Mark Millar’s latest series, Huck, which just concluded a six-issue run, is so full of heart…and not the just ripped from the chest still beating and bloody kind either. 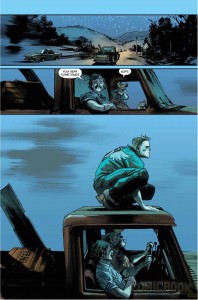 Huck is a larger than life superhero, who rarely shows off his skills in public. Instead, he simply pumps gas at a local filling station and sneaks in a good deed every day. When word gets out about his special talents, long-lost family members re-surface and Huck learns about his mother’s troubled past and why she was forced to give him up in the first place. She’s hiding powers as well and when they two are finally reunited, they make for a truly dynamic duo.

Millar could have mined his characters’ superpowers for some trademark, excessive sequences of action and violence (don’t worry, there are still a couple of panels that will make you sit up straight). Instead, he focuses on the heart of the story, Huck’s gentleness and his desire to do good in the world. He’s shy…neighbors call him slow. He can’t believe anyone would want to be with him, let alone “the prettiest girl in town,” even though he’s good looking and built like a freight train. Of course, there’s political overtones as his popularity glows. A sleazy local politician knows a good photo op when he sees one, and the president knows a new weapon when he sees one. Of course, such political maneuvering might be how Huck and his mom ended up in their predicament in the first place. Through it all, the series never loses focus on Huck’s goodness and innocence, which feels all the more effective in a genre populated by morally ambiguous super- and anti-heroes.

With a rustic aesthetic by artist Rafael Albuquerque to match the heart-felt narrative, Huck is worth the read and, with the film rights snatched up by Studio 8, the eventual watch.