With The Vegetarian, readers have found in Han Kang a writer of immense talent. From the basis of one character’s small, private decision, she wove a haunting narrative that is as beautiful as it is frightening and as political as it is personal. For Human Acts, her next book available in English (and as with The Vegetarian, also translated by Deborah Smith), Kang starts with a monumental, national event (though one likely unfamiliar to most Western readers), the Gwangju Uprising. Here, Kang proves again that she belongs in conversations about the most important authors working today and further reveals her prophetic insight into what it means to be human, both individually and collectively.

On May 18, 1980, students at Jeonnam University in Gwangju, South Korea, and other citizens in the area protested for greater democratization. The authoritarian government responded swiftly and harshly by sending in special forces who used clubs, bayonnets, and live ammunition on the crowds. The disruption lasted for nine days. “Official” reports listed around 200 casualties, but foreign journalists have argued that that number should actually be closer to 2,000. 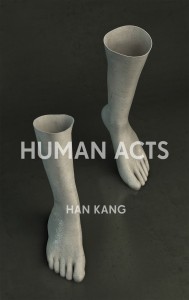 Human Acts opens with a teenage boy, Dong-ho, searching for the corpse of his friend as the uprising comes to a close. This is followed by an editor trying to navigate strict censorship laws around this event in and publish a play about it 1985. In 1990, an academic persuades a prisoner to recount his experiences of torture for his thesis. In 2002, a factory worker recounts both her past torture and the ways it continuously haunts her. In 2010, Dong-ho’s mother recalls the loss of her son. In the epilogue, Kang reveals her personal connection to these tragic events. Each of these characters offer both different vantage points into that historic event and different perspectives on suffering, loss, and grief.
Human Acts is a more difficult read than The Vegetarian, largely because it is both based in nightmarish fact and because it bounces around in time. There is a forward chronological trajectory to the novel, but each section moves freely between the past and its present. In this way, Kang, like Faulkner, reminds us, “The past isn’t dead. It isn’t even past.” Though based on a singular event, Kang’s book has universal appeal. And though this blemish on human history is smaller than, say, acts of genocide, its suffering and grief it produces is no less profound, and Kang captures all of it with great pathos. And though the event took place in 1980, it has echoes even now, reminding us of just how quickly violence can overtake us.

Reading Human Acts is a gut-wrenching experience. Kang’s vivid descriptions of a giant pile of rotting corpses, torture, and gun violence haunt every beautiful sequence of love, longing, and connection. What’s even more unnerving, as an American reader, is how even a quick online search about this moment in history will reveal the United States governments’ support of the special forces that silenced these cries for democracy.

Like The Vegetarian, Human Acts leaves us with lingering questions about what it means to be human. Is our capacity for violence and creative means of torture a defining trait? Or is it our ability to endure those horrors or our willingness to sacrifice ourselves for others that makes us human? In a country that has a brutally violent past (and present), how do we remember? How do we integrate survivors’ stories into our moving forward? In a time fraught with political discord and violence on all fronts, Human Acts is a must-read novel that shines light on what we have lost…and what we are losing.