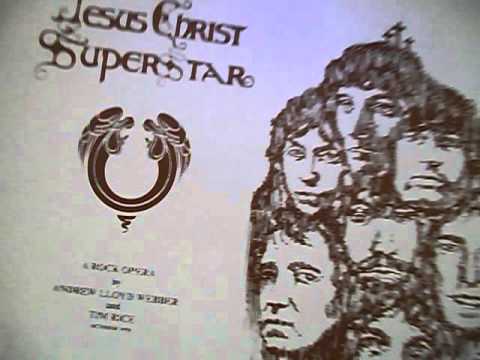 A recent online poll by The Huffington Post found Jesus Christ Superstar to be the most popular Jesus film of all time. The poll was done in the style of a March Madness bracket, voters were able to choose between “matchups” of different films and vote for their favorites. That the “championship” ended up being between Superstar and The Life of Brian could surely be the topic of a dissertation on America’s conflicted attitudes toward its “Christian” heritage. But since I’m already writing a dissertation, and it’s due any day now, I’ll leave that be.

Anyway, what a lot of people don’t realize is Superstar started out as a concept album, recorded in 1969 in London, and involving some of the best working musicians of the era. The highlight was Ian Gillan, lead singer of Deep Purple, and one of the great rock-n-roll voices, as Jesus. This recording, which you can get on CD/MP3, rocks out in a way that none of the Broadway performances do. It’s a real 1960’s concept album, with all the bombast and high production self-importance that involved.

This is a rock-n-roll musical as it is meant to be. Andrew Lloyd Webber and Tim Rice, the young Turks, pushing the boundaries of musical theater and social/religious commentary—it was the culmination of Webber’s career. But wait, am I writing as though Webber’s career ended after Superstar? Yes, I am. But wait, Webber went on to do Cats and Phantom of the Opera, the longest-running and highest-grossing Broadway musicals of all-time. Yes, and Spinal Tap was the loudest rock band in history. Their amps went up to 11.

After Superstar, rather than sticking with a musical form he understood, perhaps starting a prog rock band that could have given Rush a run for its money, Webber instead invented the easy-listening rock-n-schlock musical, combining the orchestrations of Montovani and the melodic invention of the Hanon piano exercises (five-note melody, transpose, repeat…five-note melody, transpose, repeat…).

Webber was never more insufferable than when he was indulging his pretentions to musical greatness. When I was about fourteen I saw Webber on the Tonight Show with Johnny Carson, doing a sit-down at the piano with his “wife” Sarah Brightman. It was clearly a show business marriage of convenience—Brightman got to promote her career and Webber got to introduce doubt into the widespread assumption that he is gay. Anyway, Webber played the piano and talked about his “compositions.” He then accompanied Brightman on “Music of the Night,” which was supposed to be a treat for the viewers since this song was usually sung by the male lead. She butchered this simple song with her tissue paper voice and sang the high notes so out of tune I can still hear Chihuahuas howling. The couple divorced shortly after this performance.

Enough Webber bashing. What I’m trying to say is when Superstar rocks, it does so because it is rock. Before Webber thought he was the second coming of Puccini, he showed he knew how to produce a kick-ass concept album—and the best place for his talents was in the studio, rather than on the stage. Before the Jesus role was ruined by a thousand damp-eyed nancy boys with hair extensions in the local college musical, Ian Gillan stamped it with a heavy metal shriek. Before “I Don’t Know How to Love Him” was warbled into oblivion by a million hormonal teenage girls in the high school talent show, it was given a trippy groove by disco diva Yvonne Elliman. Before Judas became a “black role,” in part though brilliant casting of Ben Vereen and Carl Anderson, in part through slightly disturbing racial projections, Murray Head brought as much life to the role as Ben and Carl, using only his voice. The concept album had the best trio ensemble to play the leads in Superstar, and except for Elliman who played Mary Magdalene on Broadway and in the movie, no one ever actually saw them play the roles.

As an adaptation of the Christ story, Superstar isn’t much of an achievement. We join the Gospel en medias res, just at the point when the pressure is building on the disciples and Jesus as they prepare to go into Jerusalem for Jesus’ final act. There’s little reference to Jesus’ teaching, some suggestion of miracles. But mainly Jesus spends his time bitching at the disciples because they don’t understand him. This is not exactly un-biblical, but not exactly the highlight of the gospels, either.

Mostly, it’s a reflection on fame, and how the legend of a person can outstrip their real personality. Judas seems to think Jesus has gone off the deep end with this Son of God stuff, and although we’re inclined to view Jesus sympathetically, we’re not so sure Judas isn’t right. Everybody, including Jesus, Judas, and the disciples, seems most concerned with how they will be remembered—the kind of immortality that comes from fame, rather than resurrection. One of my favorite parts is the Last Supper scene, where the disciples become more and more drunk on the wine while singing, “Always hoped I would be an apostle/ Knew that I could make it if I tried, / Then when we retire, we can write the gospels / So they’ll still talk about us when we die.”

Gillan is unmatched as Jesus, his voice oscillating between a vulnerable tenor and an agonizing screech. His duet with Elliman in the second number, “What’s the Buzz/Strange Thing Mystifying” seethes with sexual energy when he lets out an orgasmic yelp as she vamps, “Let me try to cool down your face a bit.” One can imagine KISS-like pyrotechnics when he “appears” in the Temple scene and peels the paint with a bluesy “My Temple should be house of prayer; but you have made it a den of thieves!” His “Gethsemane” is the vocal highlight of the album, as he takes Jesus through quiet complaint, to screaming resistance, to defiant compliance, daring God at the end: “Watch me die! See how I die!”

Elliman’s voice is voluptuous on “Everything’s Alright” and “I Don’t Know How to Love Him.” The latter song has her singing a nice counterpoint duet with a fluty synthesizer, building to a triangle-ringing orchestral climax. In all of her songs, she mixes some of her native Hawaiian accent with mainland American and British inflections into a seductive twang. “I Don’t Know How to Love Him” was one of the two songs (along with “Superstar”) that charted from this album, and Elliman later scored a #1 hit in 1977 with “If I Can’t Have You” from the Saturday Night Fever soundtrack.

Judas is played by Murray Head, of “One Night in Bangkok” fame. He plays Judas with manic energy. Unlike Carl Anderson, who embraces his role as the heavy in the film, Head’s Judas seems genuinely confused—unsure how to handle his friend with the messiah complex. Head’s voice has a rock-n-roll rasp that is missing in the more trained voices of the stage actors who played the role. This vocal style, in combination with the mega-talented Gillan and Elliman, is how I can suggest these three were the best lead ensemble, despite the obvious individual talents of Vereen, Anderson, and Ted Neely.

The villains—blues singer Victor Brox as Caiphas, Barry Dennan as Pilate, and Mike D’Abo as Herod—refrain from much of the mugging that became standard after the 1973 Norman Jewison film (particularly the “gay” Herod). Dennan would go on to acclaim as Pilate on stage and in the film, and brings a plaintive British reserve to the role, until his final agonized falsetto when he condemns Jesus.

John Gustafson does an authoritative Simon Zealotes, which booms out using a loudspeaker-like mic effect. You can almost hear him with a megaphone inciting the crowd to greater hatred of the Roman occupiers. It couldn’t be more different from Larry Marshall’s gospel hambone performance in the film.

Besides the singing talent, the real highlight of the album is that the rock instrumentals are mixed loud enough to interact with the vocals. The score is spare, with less Broadway flourish, and the band is manned by some of the best session musicians in London. These are performers most of us have never heard of before but were on dozens of hit records because they could play the hell out of their instruments. From the opening flourishes of acid-rock guitar in the Overture, to what must have been some really experimental Moog work on the keyboards, the album is truly funky. The band plays solidly with a strong rhythm section through ever-shifting tempos and time signatures. Being more interested in rocking out than projecting for the stage, the songs often take a blistering tempo, sometimes seeming to be over before they’ve started, and leaving you wishing for a little more improvised instrumental shredding or vocal fireworks.

The album stays true to its roots in the swinging late 60’s/early 70’s London music scene. It was recorded in many of the same studios and with some of the same musicians that were churning out the Beatles’ The White Album, Abbey Road, and Let It Be, The Stones’ Let it Bleed, Sticky Fingers, and Exile on Main Street , and Led Zeppelins I, II, and III. It holds its own with those other great albums, and stands as a testament to its era. In other words, this Superstar feels countercultural and controversial, something we have a hard time imagining today that it ever was.