I had the opportunity to give a talk at the PSR Sacred Snapshots event in Berkeley on April 20th about John Lennon as a rock-n-roll messiah. This is a variation on a lecture I’ve given as part of my “Pop Goes Religion” course. The conversation with those who attended reinforced for me the intense spiritual meaning the life, music, and death of John Lennon has in American popular culture, particularly among the Baby Boom generation.

Just look at the song “Imagine.” A little more than a year ago, I wrote about the religious uproar that took place when Cee-Lo Green changed the words to this song when he sang it during the Times Square New Year’s Eve broadcast. (Green sang, “And all religion’s true,” rather than, “And no religion, too.”)

But think of the significance of the song’s placement in the national ceremony of ringing in the New Year. Since New Year’s Eve 2005-06, the song has preceded the Times Square ball drop. So the order goes: “Imagine” (a song that everyone can sing along with), countdown and ball drop, then “Auld Lang Syne” (a song everyone knows the first five words to, then stumbles along drunkenly for the rest, and nobody’s sure why we sing it on New Years anyway.) This means “Imagine” has extraordinary cultural currency; perhaps no other song besides “Amazing Grace” is as familiar to the English-speaking world.

What’s interesting is “Imagine” presents not so much a spiritual ideal of peace as an anti-ideal. If the song has a theology, it’s a theology of subtraction. Take the mess we’ve got today and subtract heaven, hell, countries, religion, possessions, and greed—then you have a peaceful world. Note the song doesn’t subtract God, which Lennon believed existed as a kind of energy source at the center of the universe.

This anti-ism-ism is consistent with some of Lennon’s other songs that deal with religion. In his song, “God,” which he wrote in 1970 for his first album after breaking up with the Beatles, he lists the things he no longer believes in:

I just believe in me/ Yoko and me/ And that’s reality.

“Gita” refers to the Bhagavad Gita, the sacred Hindu text. “Zimmerman” refers to Robert Zimmerman, or as he’s known to most of us, Bob Dylan.

“His objective is quite straightforward: to stand alone intellectually—rejecting all belief systems and all idols, even the idol he had helped to create and to which he owed his own power and influence. Descartes had proposed as an axiom, ‘I think therefore I am.’ Lennon’s version might have been phrased, ‘I don’t believe, therefore I am.'” (54)

What’s interesting about this is that despite his negative belief system people tend to associate all kinds of distinct ideologies about religion with John Lennon. Much of the uproar over Cee-Lo Green’s change of the lyrics came from the so-called neo-atheist camp, which seemed to think of “Imagine” as an atheist or anti-religious song.

Many people associate Lennon with a kind of groovy 60’s Eastern mysticism. 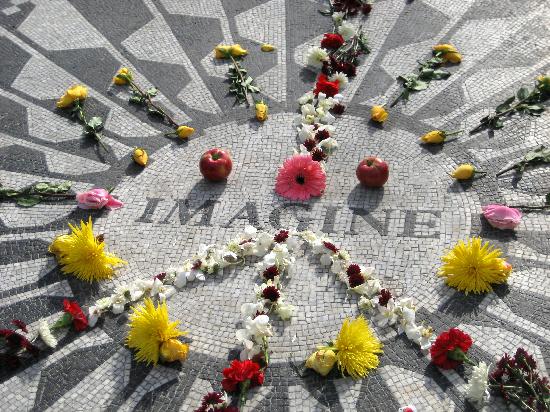 This can be seen in the offerings that are left at the “Imagine” mosaic at Strawberry Fields in Central Park. The fruit and flowers are symbols of impermanence that resemble the spiritual gifts left at Buddhist shrines. Again, this has more to do with projection than reality, as Lennon was never a Buddhist. His association with Eastern religion comes from the Beatles’ period of exploration of the meditation techniques of the Maharishi Mahesh Yogi in 1967. According to Tillery, Lennon continued some of the practices of meditation throughout his life, but this was not out of respect for the Maharishi, whom he came to despise as a charlatan. (See the song “Sexy Sadie.”) John Lennon was never much of a disciple.

In my talk in Berkeley I gave some examples of areas where the teachings of Jesus Christ and the songs or philosophy of John Lennon seem to match up.

It kind of started as a dare from a professor, but I think I can make a compelling case that “love is all you need,” is a pretty good summary of the Gospel message when viewed through a biblical lens. See here. (This will open a brief slideshow in the online PowerPoint app. Keep clicking through until you see the slide with Buddy Christ.)

Both Lennon and Christ attempted to free their followers of a simplistic disciple-and-guru relationship to a self-empowered spirituality or salvation..

This sounds like Lennon’s anti-manifesto in “Give Peace a Chance:”

Continuing on this theme of self-empowerment, Jesus hardly ever healed anyone that he didn’t say, “Your faith has made you well,” a phrase of some variation that appears at least 10 times in the synoptic gospels. This suggests that the healings Christ participated in were not magic tricks, but collaborations between the individual and God, based on the individual’s own faith.

There are distinct moments in the gospels where Christ seemed, like Lennon in “God,” to deconstruct the very idolatry his people had created around him. When the rich young man in Mark 10:18 came and knelt before him and called him “Good teacher,” Jesus’ response was, “Why do you call me good? No one is good but God alone.” Likewise, in all of the gospel stories, Jesus denies he is a King when he stands before Pilate, and even appears to deny the title of Messiah in Luke.

The idea that Christ was out to empower people to spiritual freedom rather than to create a cult of personality around himself is still pretty controversial in Christian circles. In Christianity, the one idolatry allowed is the cult of Jesus, in which Jesus becomes your best friend, your boyfriend, your healer, your confidante, your Prozac, your Santa Claus, your superhero, your favorite political philosopher (a la George W. Bush), your batting coach, your CEO, your drill sergeant, the Lion of Judah and the Lamb of God, the King of Kings and Lord of Lords. Not so much a person who had a specific teaching, a particular personality, and took specific actions in a particular time and place in history, but a symbol, an avatar, an embodiment of one’s fondest wishes and needs.

And here might be the most salient comparison between Christ and Lennon. After both of them were martyred, they began to take on a life as spiritual symbols rather than people—to become distanced from their specific teachings, personalities, and actions. Both Christ and Lennon became empty figures to be filled with people’s personal agendas and ideologies.

Often these followers’ projections are at direct odds with the actual beliefs of their purported spiritual gurus. How can anyone twist the teachings of Lennon to the point of lashing out at Cee-Lo Green by tweeting, “@Cee-Lo Green go to hell fat boy I hope you have a heart attack and die.” How could anyone distort the self-sacrificial love of Jesus Christ into “Onward Christian soldiers, marching as to war”?

The way many Christians think of Jesus, and many people think of John Lennon, is personally disempowering, leads to isolation rather than community, leads to self-delusion, often leads to self-righteousness, and in its most twisted forms, judgment and violence. I can’t think of anything both the Sage of Liverpool and the Man from Nazareth were more against.