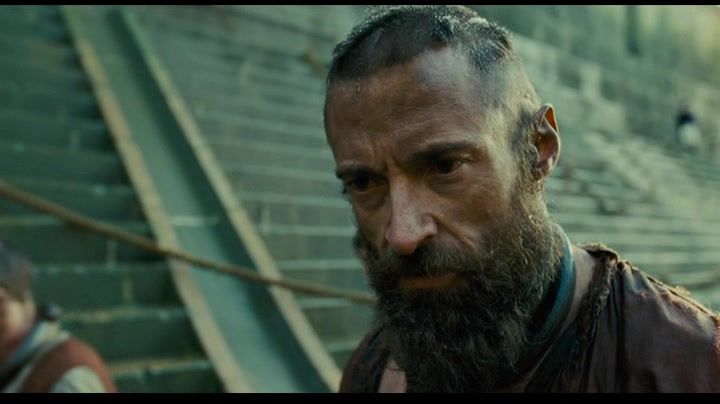 Very rarely does one come away from a movie musical with a new understanding of a theological doctrine. But, surprisingly enough, for all it’s melodrama and schmaltz, that’s where I ended up after seeing Les Miserables.

I’ve made it clear on these pages that I have a problem with one important element of orthodox Christianity, at least as interpreted by my Protestant tradition through the lens of the Apostle Paul and the theological matrix of Augustine, Luther, and Calvin. I’m talking about substitutionary or juridical atonement. The idea that Christ took on not just our sins, but our Sin, which is original to our birth and an inescapable legacy of the “Fall.”

This doesn’t make sense to me. There was no Fall. We evolved this way. As animals shaped by natural selection, we are inheritors of the “selfish gene.” At times our evolutionary inheritance makes us greedy, myopic, and downright horrible. Miraculously, however, our consciousness and sense of ethics has also evolved beyond our animal past, and has made us capable of acts of kindness, generosity, and mercy. Summing up the scope of history and the slow, halting movement toward justice and increased human and planetary well-being, I see a species struggling, often failing, but still possessing the possibility of a future of greater wholeness with God.

And that’s my spoiled, First World view of things. The world, particularly the developing world, suffers more in a day than Jesus could ever atone for in six hours on a cross. When you look at what we have not been saved from, the idea of a theoretical salvation from guilt over the imperfection of human nature seems like pretty thin gruel.

Les Miserables, both the book by Victor Hugo, and the Schonberg-Boublil-Kretzmer musical, sets up a stark contrast between theologies of atonement. The juridical is represented by Inspector Javert, who sees justice as primarily an accounting for the wronging of the righteousness of God. An atonement of grace is represented in the life of Jean Valjean, who is granted a new life by the merciful actions of a bishop who saves him from being condemned permanently to prison after an act of theft of the bishop’s household silver.

At first Valjean is uncertain what to do with this act of mercy, whether he can even let go of the hatred he has built up against his fellow human beings and live his new life. He thinks he might be able to live a virtuous life by becoming a “job creator”—starting a factory for destitute women to make Rosaries. But even this basic act of good economic stewardship is not a sufficient enough response to the mercy he has received. He finds he must actually stand in the place of the poor and oppressed, taking the place of a prisoner in the dock, rescuing a “fallen” woman, adopting her orphaned child as his own, and eventually, joining with revolutionaries barricaded against the very systems of government and commerce that oppress the poor.

A recent article by Rev. Morgan Guyton, “Valjean and Javert: The Two Christianities of Les Miserables,” brings up the important contrast between law and grace, and even brings out the social justice themes of the story as crucial to understanding Valjean’s salvation.

“Both before and after his conversion to Christianity, Valjean’s actions display a justice that is rooted in personal solidarity… People who live in security have a vested interest in the justice of the social order that provides their security; people who live in desperation are going to care more about the justice shown to personal individuals in their lives than respecting a social order that doesn’t provide them with any stability.”

Guyton then takes this a step further and suggests that Valjean’s “salvation” challenges the very notion of retributive justice that is central to much orthodox Christianity.

“The bishop’s mercy pays a ransom to buy the soul of Jean Valjean in the same way that God pays a ransom through Jesus’ cross not to Himself out of a need for the eternal bank of retribution to avoid default, but to us in our need to be paid back for the injustices we have suffered and to be assured of our amnesty for the injustices we have committed.”

Guyton is correct in understanding that in terms of righting wrongs, the truly just act is not one of retribution, but of “unconditional mercy.” It is this kind of justice that we are asked to emulate when Christ says, “Take up your cross and follow me” (Matt. 16:24). This is an invitation to suffer with Christ in actions of justice that show solidarity with the poor and oppressed, to practice the sacrificial mercy of forgiveness for those that have wronged us, and, when necessary for specific wrongs we have committed, to experience the lighter yoke of Christ’s forgiveness.

But even here, Guyton’s “mercy rather than righteousness” atonement doesn’t take the whole Christ experience into account. Most orthodox Christianity, especially Protestantism, might better be called Pauline-Johannine Christianity. The book of Romans, when interpreted through the Augustinian heresy of Original Sin, provides the guilt.[1] The high Christology of John, with “it is accomplished” uttered at the climax of the crucifixion, not after Jesus is raised from the dead, provides the required retribution.

By focusing solely on the matrix of sin and atonement, orthodox Christians can avoid the best news of the Good News: the Resurrection. Rather than living out an Easter theology of resurrection, most theologians have preferred that believers live in a continual Good Friday cycle of sin and atonement. Terms like sanctification, suggesting an eventual holiness of the human soul, are reserved for some far-off future after death, or even after the end of all time.

In doing so, these theologians avoid the mystical element of the Christ story—the Resurrection—that leads beyond sin, atonement, salvation, and justification, into reconciliation. The fatal flaw with juridical or substitutionary atonement, or even an atonement of mercy over punishment, is that at the material level, yes, justice must in some way be sought after. In our daily lives, there are wrongs committed, and we must do what we can to right those wrongs.

But at the spiritual level, in a universe in which resurrection is possible, we have the opportunity to move beyond justice to reconciliation. And in our daily lives it is often our guilt, our sense of unworthiness in being able to share in the gifts of Christ’s Resurrection, that keep us from reconciliation with God, with ourselves, and with each other.

I have no problem following Christ to the cross, even nailing myself to it if need be. And as a gay man in the Church, there are usually plenty of fellow Christians who are willing to help me if I can’t get the nails in myself. But when it comes to resurrection, when the stone is rolled away and the angel says, “Get up!” I often just want to hit the snooze alarm. Embracing the gifts of resurrection—of life restored, of relationships renewed, of freedom from guilt and living into the full potential of a being created in the image of God—has been my most difficult spiritual struggle.

This is supposed to be a review of Les Mis, and maybe I’ve gotten carried away here. But the theology of Resurrection fits Jean Valjean’s experience as well. After a few days in the rectory after the bishop’s merciful act, Valjean frees himself from his own guilt by ripping up the parole warrant that has kept him from living fully after his release from prison. He takes on a new identity, and begins a life that is full of (this-worldly) virtue and justice and (other-worldly) love and compassion.

[1] There is significant evidence that Augustine misinterpreted Romans 5:12. The verse reads: “Therefore, just as sin entered the world through one man, and death through sin, and in this way death came to all men, because all sinned…” Augustine’s Latin text at the time would have read, “In him all have sinned,” creating, in Hans Küng’s words, an “inherited sin” rather than a “primal sin.” See: Hans Küng, Christianity: Essence, Future, and History, 293.