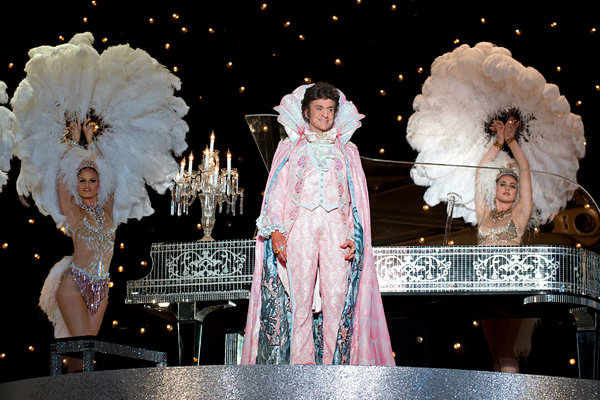 Liberace stood out in that he let everyone see into his closet, performing as a royal queen bedecked in Austrian rhinestones and doted on by his boy toy protégés on stage. Sometimes the best way is to hide is in plain sight.

In the Liberace biopic Behind the Candelabra, which premiered on HBO last Sunday night, Matt Damon’s character, Scott Thorson, comments to a boyfriend on first seeing Liberace’s act that he’s surprised the audience of middle-aged women and Las Vegas conventioneers would like a performance that was so gay. The boyfriend replies, “They don’t know he’s gay.”

Thorson, just seventeen when he was taken under Liberace’s feathered cape as a lover, Boy Friday, and surrogate son, lived a profoundly surreal life in the pianist’s mirror-ball universe. For several years in the late 70’s and early 80’s, Thorson played a part in Liberace’s Las Vegas act by dressing as a chauffer and driving the pianist onstage in a rhinestone-studded Rolls Royce. As very few Vegas tourists saw the act more than once, they could hardly notice the young man slowly turning into a Liberace caricature, complete with face implants to make his cheeks and chin stand out like the pianist.

Behind the Candelabra is an example of both the progress made by LGBT people and the Jupiter-like gravitational pull of director Steven Soderbergh. Just a few years ago, a film about a grotesque, aging gay man and his serial devotion to young male lovers would have sent Hollywood actors fleeing for the hills. Yet, despite this project receiving no theatrical distribution in the United States (it premiered at Cannes last week and will be released in theaters in Europe this summer) big-name talent seems to have clamored to be in on the project.

Besides the remarkable casting of Michael Douglas to play the lead and Damon to play Thorson, Candelabra features Dan Akroyd as Liberace’s cutthroat agent, Scott Bakula as a friend of Liberace and Thorson’s first boyfriend, Debbie Reynolds as Liberace’s mom, Cheyenne Jackson as former Liberace protégé Billy Leatherwood, and Rob Lowe as an unscrupulous (and hilarious) plastic surgeon. Like Soderbergh’s Ocean movies, the filming of which had a reputation as rolling rat-pack party sets, these actors seem to be having entirely too much fun under 70’s feather cuts, layers of garish makeup, and piles of jewelry.

The relationship between Douglas and Damon has a certain believable chemistry, but that’s not really the point. Watching two of the most macho actors in Hollywood—known for roles like Jason Bourne and Gordon Gekko—in clench after passionate clench, reminds one of Dr. Johnson’s comment on seeing a dog walk on its hind legs: “It is not done well, but you are surprised to find it done at all.”

What is done well is Michael Douglas’ impersonation of Liberace. This film will burnish his legacy as an actor with more range than the typecasting of his Fatal Attraction/ Basic Instinct years. Douglas works as Liberace because he plays him without a hint of pathetic camp. His take, and the take of the film, is that Liberace was basically a professional—a consummate performer who happened to suffer from the excesses of taste and desire that accrue over a lifetime in show business. Having lived his entire life in the public eye, in the Hollywood shadow of his legendary father, maybe Douglas can relate.

The sad thing about Liberace, and perhaps this is an ache known by many performers, is they are beloved, but no one but their closest friends and family know them as they really are. In this way, most stars live their lives in the closet.

There’s a book that gets mentioned at the end of the movie, The Wonderful Private World of Liberace, a small coffee-table volume that purports to tell the “real story” of Liberace’s life. It contains gorgeous spreads of his homes, cars, and outfits, and includes such humble details as his mother’s recipe for lasagna and pictures of his beloved dogs. Even as the book went to press, however, Liberace was dying and his lawyers were still settling a palimony suit with Thorson. Yet, to the end, Liberace kept up the façade, including claims that he had never had a facelift, that his wig was his real hair, the ridiculous story that he had lost his virginity at age sixteen to a blues singer named Miss Bea Haven, and that he could never marry because the love of his life was ice skater/actress Sonja Henne.

In the end, the film is a tragedy, not because Liberace died of AIDS, or because he was unable to form a lasting relationship with Thorson, but because he never felt the joy of being truly known for who he was. The persona become inseparable from the person, and he suffocated in his diamond-studded closet.