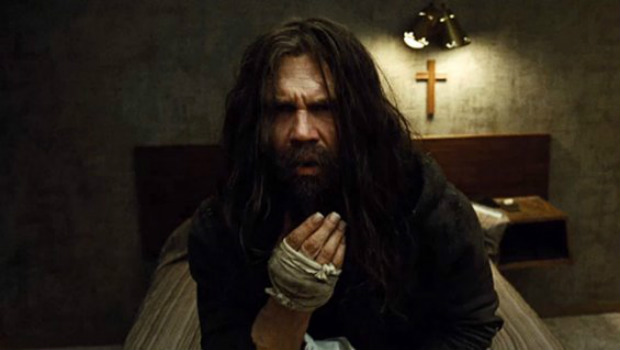 Park Chan-Wook‘s Oldboy is one of those films that you never forget. I still remember everything about the first time I saw it…and the panicked phone call I made to my wife, who was working the night shift at the children’s hospital. Yes, it’s worth interrupting the care of others to talk about this film. Needless to say, I had mixed emotions when I first heard the news that Spike Lee was going to direct the American remake. I anxiously awaited and feared its delayed release. Though most of my comments below compare the remake with the original, I think they shed light on what’s wrong with Lee’s remake as a stand-alone film. For viewers like me who love the original, it’s hard to take the re-make on its own terms. By comparison, it’s a poor re-telling of a haunting narrative. On it’s own, it’s just a mess.

In Oldboy, Joe Doucett (Josh Brolin) is a smooth-talking, and frequently drunk, businessman, a horrible ex-husband, and a poor excuse for a father. In a drunken stupor, he is kidnapped and imprisoned in a hotel room/cell for twenty years. His captors periodically groom him and consistently feed him the same meal of Chinese dumplings. On the day of his unexpected release, his captor phones him to tell him that he has 48 hours to find out who imprisoned him and why. If he doesn’t solve the case in the allotted time, he will kill Joe’s daughter. Joe meets a mysterious young woman, Marie (Elizabeth Olsen), who treats his wounds and helps him with his investigation. They also sleep together. With Marie’s help and encouragement, Joe quickly learns the identity of his captor, Adrian (Sharlto Copley), and the reasons behind his torturous revenge. The conclusion of the narrative features incest and a myriad of disturbing, graphically violent images. I won’t spoil the rest of the fun.

By comparison to Chan-Wook’s original masterpiece, this version of Oldboy pales in almost every respect. As the lead, Brolin barely touches Choi Min-Sik‘s drunken, maniacal, and brilliant performance as Dae-Su Oh. Lee’s direction and pacing robs the remake of all the original’s narrative mystery and shocking conclusion. Rather than stringing us along to the bitter, nightmarish end, Lee and writer Mark Protosevich give us everything up front. This is, perhaps, the strongest evidence that Lee and Protosevich were trying to craft a film that could appease both Chan-Wook’s legion of fans and viewers who had never seen Oldboy before. I imagine that, had I never seen the original, I would still be particularly frustrated with how soon and in what fashion the filmmakers Adrian’s identity.

Lee and Protosevich also change the events that motivated Adrian’s quest for revenge. This change affects not only the nature of the “betrayal” but the moral tone of the rest of the film. In this case, Adrian feels even more twisted, which is simultaneously unnecessary and robs viewers of any sympathy (twisted though it may have been) that we felt for his character in the original.

The expedited pacing and narrative changes impacts the “satisfaction” in or shocked disbelief of the antagonist’s revenge that viewers might have felt in the original. At the same time, Doucett’s self-inflicted punishment in Lee’s remake pales in comparison to Dae-su Oh’s torture in the original. Lee only pays lip service to Chan-Wook’s most daring, grotesque images and sequences. When Doucett finally learns what he did to earn his imprisonment and, moreover, the grave sin he committed during his investigation, it lacks virtually any of Dae-Su’s remorse and brokenness in the original.

Because everything feels like an emotionless, hollow re-staging, Lee’s remake of Oldboy is the strongest case I can imagine for the argument that great foreign films simply deserve re-releases rather than re-makes.

Oldboy (104 mins) is rated R for strong brutal violence, disturbing images, some graphic sexuality and nudity, and language and is in theaters everywhere. Save yourself the time, money, and disappointment (even if you’ve never seen it) and just (re) watch the original. Thankfully, the Korean language version is now streaming on Netflix.

For a surprisingly positive reaction to the film, check out Mick LaSalle’s review for the San Francisco Chronicle.