Jesse Owens is synonymous with greatness and triumphing over unimaginable odds at the 1936 Olympic Games in Nazi-controlled Berlin. But, contrary to popular opinion, he wasn’t alone. In fact, Owens was only one of 18 African American Olympians to compete in those games. The new documentary, Olympic Pride, American Prejudice, tells the story of those American heroes. 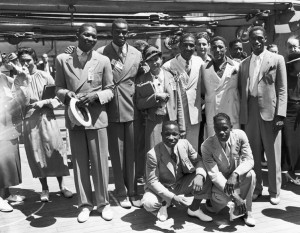 Olympic Pride, American Prejudice is a truly moving documentary that sheds light on important Americans who accomplished great feats in human history. The film is writer/director Riley-Draper’s attempt to “restore their legacy and cultural inheritance to its proper place.” While it’s certainly educational and inspirational for audiences, it also impacted the lives of the athletes’ surviving family members. Riley-Draper said, “Our Chicago shoot proved significant; it was the first time the families of athletes Tidye Pickett, Ralph Metcalfe and John Brooks had ever met.”

The archival footage in Olympic Pride, American Prejudice provides extended glimpses into Hitler’s Berlin, but complicates much of what we know–and assume–about this time and place. It’s interesting to hear athletes talk about the ways in which many Germans received them, which was, ironically, more hospitable than their own white countrymen treated them. One wonders what a 1930’s Olympics set in the American South (or anywhere in the United States for that matter) would have looked like.

Olympic Pride, American Prejudice is also a reminder of how sports continue to bridge cultural gaps to bring people and cultures together and how they can both expose and undermine society’s injustices. Riley-Draper adds, “Intentionally or not, politics, arts, and sports are often intertwined. There is something incredibly inspirational about those triumphant moments in history when the underrepresented and marginalized fervently advocate for inclusion. It is these collective contributions that have propelled progress in America’s struggle for justice.”

Olympic Pride, American Prejudice (90 mins.) has yet to obtain distribution.