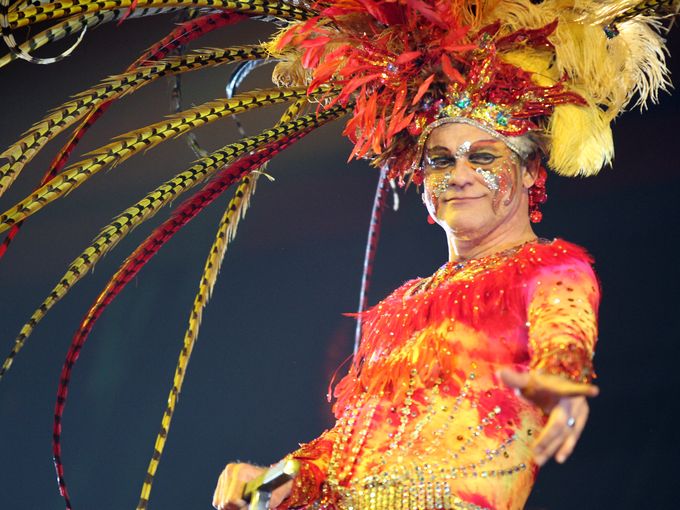 I still don’t believe what I witnessed this past weekend. Blinking my eyes in the daylight, I can conjure memories of feathers, explosions of confetti and lights sweeping a bouncing crowd of revelers. There was royalty—kings and queens decked out from tiara to toes in glitter. There was pounding, dance-inducing music. And drag—what drag! Maybe more queens in red carpet gowns and gravity-defying wigs than I have ever seen in one room, even having lived in the gay Meccas of San Francisco and New York City.

My memory is of the Mardi Gras Bal Masque of the Mystic Krewe of Apollo de Lafayette. Apollo is a gay organization founded thirty-nine Mardis Gras ago. What was once a private party among friends has become the hottest ticket of the season in this city of 140,000. Lafayette, the center of Cajun country, celebrates Mardi Gras in its own quaint fashion, with parades that are family events and old French peasant traditions like the courir—a race from house to house to gather ingredients for a communal pot of gumbo.

But the Krewe of Apollo, worshipping at its own altar of the buff Sun God himself, puts on a show for the ages, every single year. Relying completely on local talent, Apollo stages a tableau of dance and costumes based on a theme – this year was Cirque D’Apollo—that includes dozens of Krewe members in choreographed performance. The costumes tower ten feet or more over their creators, blacklit and backlit with blinking lights and brightly-colored feathers. This year included costumes like The Sun, the captain of the Krewe emerging from a luminous ball wearing a headdress like Carmen Miranda on meth; the trickster, with fluorescent skeletons suspended over his head; the Elephant Man, dressed with giant silken ears and a trunk; and about two dozen more costumes. In between the costumes are dance, drag, and burlesque acts. And of course, the highlight of the evening, the crowning of the king and queen (both men, of course) in tiaras, robes, and backpieces so massive they can barely move.

What’s more, the whole show is interactive. Each costumed performer, dancer, king or queen, mounts a large cart or “float” and is pushed through throngs of revelers as they toss out beads to the crowd. Two thousand-plus attendees in formalwear scream, shout, and jostle for the booty as it flies off the floats, and for close-up cell phone shots of the magnificent costumes.

What’s difficult to remember in the midst of all the wildness is that Mardi Gras started as a religious festival—the lead-up to Lent, the most solemn 40 days of the Christian year. So many members of the Krewe are spiritual refugees, rejected by their churches for being gay or queer. The queen of last year’s ball, who has graciously ruled Apollo for the last year, is the son of a Pentecostal pastor. When you hear him speak about the friendship and love he receives from the Krewe, you realize his church missed out on a powerful preacher.

Yet somehow the Krewe has captured the holy moment through a queer lens. To be in the midst of the ball is to stand on holy ground. To be near the royalty as their attendants push them through the crowd is to brush up against rhinestoned divinity. To reach your hands out to catch the beads they throw is to become a supplicant, grasping for a relic from a sparkling saint.

There was a kid near us, probably in his twenties but he looked younger. He had two big glow sticks the size of majorette batons, and he was dancing the whole night. Waving those green sticks around, shouting to his friends, kissing his boyfriend. We didn’t see him stop once. Every song was his jam; every costume was his favorite. Sheer, unbridled ecstasy was his Mardi Gras mask. We speculated that he might have been on something – coke or ex. But I like to believe he wasn’t. I like to believe that as a child of the South, he had never been surrounded by so many members of his queer tribe or seen so much gay spectacle on unabashed display.

And yet, even in the unhinged revelry, there is a preview of Lent’s mortality. As John Rechy wrote of Mardi Gras in New Orleans in his gay classic City of Night:

The streetlights, turned on now, will prolong the naked street merriment to midnight. Tomorrow, I keep thinking. Tomorrow….when Ash Wednesday will hang like a pall over this city.

For Rechy, a gay man raised Catholic, Ash Wednesday was what broke the Mardi Gras spell, sending the “demons and clowns” scurrying back into the shadows.

Indeed it seems unavoidable that in every fairy-winged costume and drag gown, in every shower of confetti and stage mist, there is desperation for one more dance of life, one more dose of Mardi Gras magic, before the ashen cross marks your forehead: “Remember you are dust, and to dust you shall return.”

But what irony, that the queer community that was once despised and rejected, that thirty-nine years ago practiced their rites in secret for fear of harassment, now hosts the social event of the year. As it is written in 1 Peter 2:7: “The stone that the builders rejected has become the cornerstone.” And even more important than the one-upmanship of having the most incredible Mardi Gras celebration outside of New Orleans or Rio or Sydney, is the community and fellowship which has emerged: “Once you were not a people, but now you are God’s people; once you had not received mercy, but now you have received mercy.” (1 Peter 2:10, NRSV).