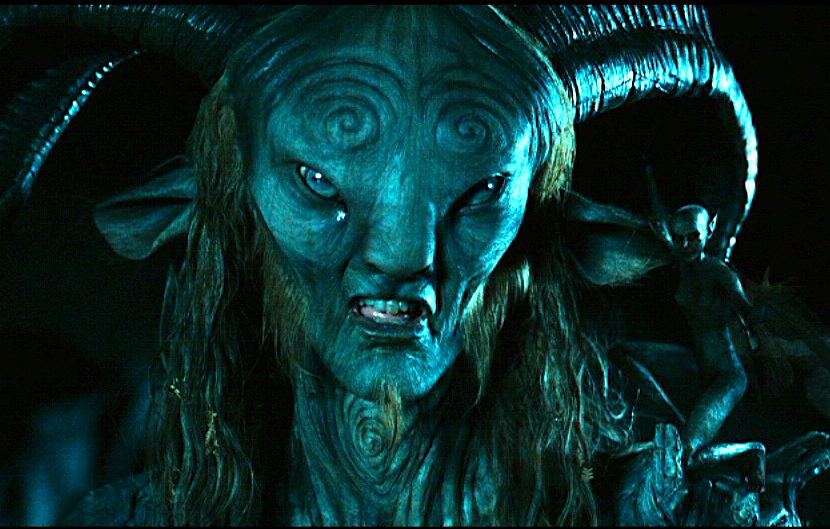 Richard here. After six years of developing and submitting (and re-submitting, and re-submitting) a paper on the menstrual themes in Pan’s Labyrinth, I finally have my first published, peer-reviewed paper. Here’s the link to the Journal of Religion and Film, along with illustrations of certain key concepts.

How did this paper come about? Ryan’s and my PhD adviser, Father Michael Morris teaches a class in the spring called “Cinema Salon.” This involves going out to see films that are in the theaters and then returning to class to have a three-hour discussion on their potential theological themes.

It should also be noted that students are signed up each week to bring in food, which often becomes a competition to outdo each other in scrumptious hors d’oveurs. Father Morris brings the wine. In fact, the unofficial slogan of the class is In Vino Veritas. If you think this is a rough way to spend the semester, you’re right–we slave over that finger food. The prime time for this class is during the third hour, when the wine has kicked in and the students are er… at the height of our analytical abilities.

During the discussion over Guillermo del Toro’s Pan’s Labyrinth, and during that magical third hour of the class, I suggested that the film was really about a girl getting her first period. The shocked silence was more than a first-year grad student could hope for.

I explained that Pan represented a uterus, and the Pan’s head/uterine imagery was used throughout. And when Ofelia, the heroine of the film appears to die, she doesn’t so much die as regress to a subconscious underworld where all of our “inner children” and their accompanying monsters and fairy tales live. If there’s a singular physical moment this could be said to happen for a girl, it would be the onset of menstruation.

As I followed up on this theory in my final paper for the class, I found an interview with del Toro, with British film reviewer Mark Kermode, that suggests that I was onto something.

Mark Kermode: Obviously watching Pan’s Labyrinth, there are Jungian archetypes in it, and there’s definitely uterine imagery. I’m assuming that’s not just me being crass.

del Toro: No. I very deliberately designed the idea of the fantasy world to be extremely uterine. We used a fallopian palette of colours: we used crimsons and golds, and everything in the fantasy world is very rounded while everything in the real world is cold and straight. You can see it in the not-so-subtle entrance to the tree. When we did the poster for the movie for Cannes, somebody said they wanted to call the movie A Womb With A View.

Here is the link to the delToro/Kermode Interview.

You can also peruse a flash article in the Guardian, which shows delToro’s sketches for the film.

There are several sections in my article where I describe scenes and symbolism from the film in detail. This can be very hard to follow if you haven’t seen the film. So, as a PopTheology.com exclusive, I’m providing illustrations based on stills from the film.

Enjoy, go watch the movie again, and see if you see it differently this time.

I propose that the Guillermo del Toro film, Pan’s Labyrinth (2006) follows the narrative outline of Joseph Campbell’s hero’s journey as experienced through the biological process of onset of menstruation in its young protagonist. I suggest a reading of the film that takes into account the visual and mythological symbolism of the figure of Pan, as well as the cultural context of menstruation in mythology and religion. I offer interviews from the director that support this interpretation, but ultimately I value a folk interpretation, or a “viewer’s hunch” that the strange and fertile symbolism of the film represents a coming-of-age struggle intimately familiar to women.

“On viewing Pan’s Labyrinth, one is struck by the repeated symbolism of the faun’s head, echoing the goat-like visage of Pan, with its triangular face and curling horns. The faun’s head appears in the form of a fig tree into which the heroine crawls, on the headboard of the bed where her mother sleeps, and in numerous architectural elements in the film. The faun’s head mimics the appearance of a uterus, fallopian tubes, and ovaries.” (Page 2)

“As a marker of months, tides, and seasons, and associated with the menstrual process of women, the natural, feminine time keeping device of the moon [is used as a symbol in the film.]  (The words “moon,” “month,” and “menstruation” share the common Latin root mensis.) […] “As an example, the day after Ofelia is given her initial task from The Faun, she prepares to take a bath. The light in the room is natural, emanating from three non-symmetrical, moonlike windows above the bathtub. Here Ofelia sits and runs her hands over the previously empty book that Pan gave her, causing white pages to dissolve into an intricately-illustrated instruction of her first task. Once her first task is completed, she returns to the bathroom, and the scene is cropped to show only two moons looming behind her, suggesting the second task is at hand. …As Ofelia moves on to her final task, which must be completed by the full moon deadline imposed by Pan, the viewer waits for the final, singular moon that signals the completion of Ofelia’s trial. The single moon appears, ironically, as Ofelia lays dying on the edge of the labyrinth at the end of the film. As her blood drips into the deep well at the center of the labyrinth, the full moon reflects in the blood that has collected at the bottom.” (Pages 9, 10).

“Once Ofelia figures out the second task, the viewer can sense it has a strong association of sexuality in the context of the Christian doctrine of Original Sin. The instructions in the magical book include a drawing of a skeletal “pale man” Ofelia will meet in the chamber she enters during the task, and the illustration shows a girl opening the small door with a key that is placed provocatively between his arched legs. Invoking the biblical forbidden fruit, Pan’s instructions to her include an admonishment that she will see tantalizing food in the chamber, and that her life depends on not eating it.” (Page 13)

“…As she bleeds and dies in the real world, in the fantastical world she is brought to the underground kingdom, ruled by her real father and mother and attended by Pan. Ofelia is dressed in a red satin jacket, and takes note of her red sneakers, symbols of both her sacrifice and her menstruating adulthood. […] Although in the real world she dies, here she is reborn to reign as the princess of the underworld. Demonstrating the unmistakable subtext of Ofelia’s fertility in the film, in the last scene, the final image on the screen is the uterus-shaped fig tree, the ‘womb with a view,’ which had been barren and void, sprouting a white flower on one of its fallopian tube branches.” (Page 17).

“The first step [to spiritual and psychological wholeness] consists in the radical transfer of emphasis from the external to the internal world, macro- to microcosm, a retreat from the desperations of the waste land to the peace of the everlasting realm that is within…All the ogres and secret helpers of our nursery are there, all the magic of childhood…“ — Joseph Campbell