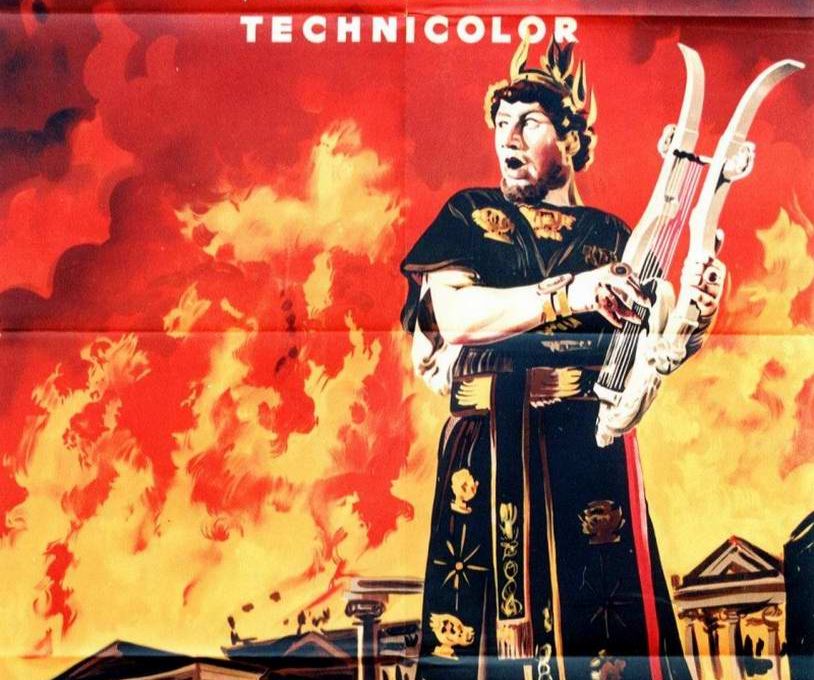 Along with The Sign of the Cross (Paramount, 1932) and The Robe (20th Century Fox, 1953), Quo Vadis (MGM, 1951) is one of the great forgotten films of the mid-Century Christians-and-Romans spectacles. It’s a lavish production that took advantage of postwar Rome’s cheap labor and lack of signs of modern life (the place had been bombed back to the First Century). This is a three-hour gaudy exhibition of horses, chariots, centurions, Coliseum scenes, with a cast of thousands, and men who know how to be men (oversexed) and women who know how to be women (used for sex, then ignored).

The story is pretty standard fare for this kind of film. A Roman centurian, Marcus Vinicius (Robert Taylor), wants virtuous Christian girl Lygia (Deborah Kerr). Christian girl wants to make honest man out of centurion. Centurion resists and has sex with Empress (the sizzling Patricia Laffan). Centurian loses his tough façade, falls in love, and is willing to follow Christian girl to the death. Bring in the dancing girls. Cut. Print.

Robert Taylor plays Vinicius as a cocky American, his blue eyes shining from half-closed lids, his line delivery clipped and confident, with a slight pragmatic world-weariness—like Humphrey Bogart without the slurred alcoholism. This is an interesting departure for a Hollywood film, where British actors are almost always cast as Romans. (Although perhaps in light of the story’s resemblance to Sign of the Cross, Taylor may be seen as a parallel figure to the all-American Frederic March.) Vinicius’ Uncle Petronius, a close advisor to Emperor Nero, is played by the British actor Leo Genn. This difference in accent between the two more or less destroys the British = Roman illusion. The audience could be forgiven for wondering what mixed Anglo-American-Roman family these two came from.

But the real highlight of this film is Nero, portrayed by Peter Ustinov. An infantile megalomaniac with delusions of being a great artist, he is petulant, cruel, narcissistic, perverse, hysterical – in other words, magnificent. Ustinov staggers around the set, eyes always in distant focus, braying his odes on his lyre (the famous “fiddling” of Nero.) His burning of Rome is chalked up to sheer artistic ennui—the only subject worthy of his muse is the incineration of the ancient city. Nero is, quite literally, a flaming queen.

The film is packed with some of the best decadent dialogue that the Production Code would allow. Vinicius and Petronius discussing the Empress Poppea: “His new wife, Poppea, sounds interesting – a harlot for an empress?” “My dear Marcus, what a proletarian observation! You must know that a woman has no past when she mates with a god.” The grieving Nero, delivering one of the best camp lines since “Harness my Zebras!”: “Tigilinus, the weeping vase!” (pronounced vahz). And Petronius’ suicide note to Nero: “Adhere to your special gifts, Nero – murder and arson, betrayal and terror. Mutilate your subjects if you must; but with my last breath I beg you – do not mutilate the arts. Fare well but compose no more music. Brutalize the people but do not bore them.”  For all this and so much more, the production was blessed by the pope and won the Nobel Peace Prize. Take the time and money you were going to waste on the third Transformers movie, and buy this one instead.