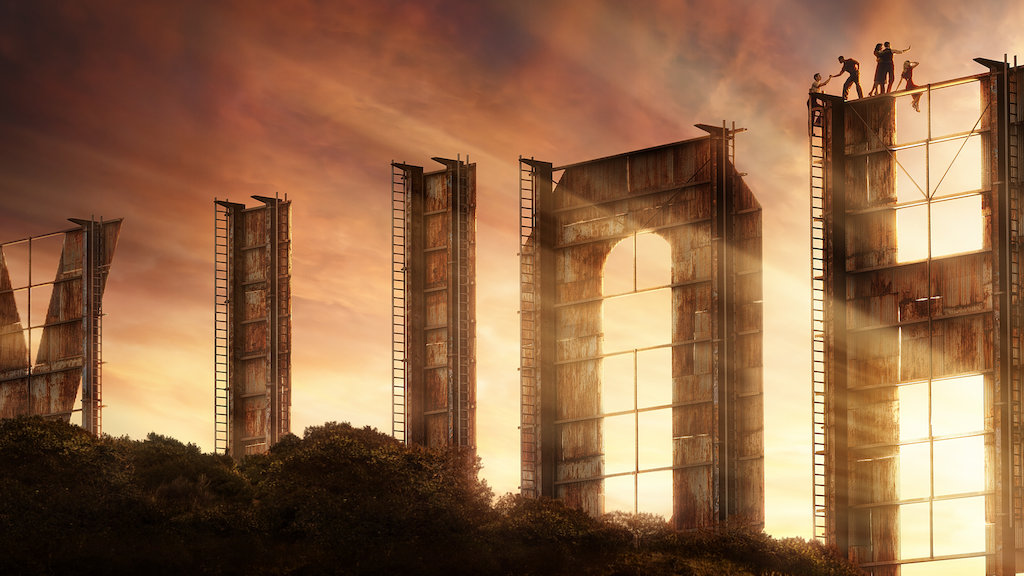 A good bishop once said, “Our greatest fear is that if we are truly known, we will not be loved; and if we are loved, it will be because we are not truly known.” This is the essence of Ryan Murphy’s limited Netflix series Hollywood. The series spins a revisionist history of Hollywood, in which women, people of color, and gay people have a chance to be themselves—that is, to be truly known—and still be successful in the film industry—that is, to be recognized, accepted, and loved.

The fact that the show is set in 1947-48 means this is a complete fantasy, as the structural racism, unyielding patriarchy, and homophobia that destroyed lives and careers were fierce realities in the postwar period. Nevertheless, Murphy and his collaborators give the story the lavish sets, costumes, and jazzy score of a 1940s studio prestige picture, with a snappy gee-whiz-it-just-might-work plot of a backstage comedy-drama.

In the show we follow Jack Castello (David Corenswet), a white Midwestern newcomer who wants to make it big in Hollywood. He finds his first job at Ernie West’s (Dylan McDermott) Golden Tip gas station—a service station that “services” more than just cars—it’s a male brothel that caters to A-list Hollywood stars and executives.

Squeamish about attending to the male customers, Jack recruits Archie Coleman, (Jeremy Pope) a gay black aspiring screenwriter who doesn’t mind which way the car door swings as long as the customers have the cash. Both men are trying to get noticed by the fictitious Ace Studios, which just hired Director Raymond Ainsley (Darren Criss) who is mixed-race Filipino, but passes as white, and his black aspiring actress girlfriend Camille Washington (Laura Harrier). These characters, along with a young closeted actor named Roy Fitzgerald (soon to be given his stage name Rock Hudson) (Jake Picking) form the cast of idealistic youngsters ready to take on the white-male-dominated studio system.

The older generation of studio producers is a venerable lineup of drama veterans including Patti LuPone as the wife of Ace Studio’s president, Joe Mantello, as a closeted executive producer, and Holland Taylor as the studio’s chief talent developer.

The villain, who represents the pre #TimesUp casting couch culture of Hollywood, is Henry Willson, the actual agent of such 40s and 50s beefcake stars as Rock Hudson, Tab Hunter, John Derek, and Troy Donahue. The abusive Willson, who often required sexual favors from his stable of hunky stars, is played with sadistic relish by Jim Parsons. (Parsons has a gift for creative profanity that matches the drill sergeant in Full Metal Jacket.)

Somehow, through the younger cast’s combination of luck, pluck, and moxie, combined with the older cast’s Hollywood savvy, they manage to make a film called Meg with a black gay screenwriter, a mixed-race Asian and white director, and a black leading lady with a white boyfriend. Despite everyone’s fears about rejection of the film, particularly how it will play in the South, Meg is wildly successful at the box office and wins a slew of Academy Awards.

It has always been a question whether the vision of reality presented by Hollywood, particularly in its Golden Age, shaped social beliefs on issues of race, gender and sexuality, or merely reflected the social mores of the United States. Certainly, the Hollywood Production Code, still very active in the late 1940s, did not allow for independent women characters, homosexuality, or what was then termed “miscegenation.”

Murphy’s Hollywood takes the strongest possible position for the movie industry as a shaper of culture. It suggests that if a few idealistic studio producers had green-lighted films with more progressive characters and stories, it would have sped racial integration, and the women’s and gay-rights movements in the country as a whole.

This is hard to believe, and has led to the criticism that Hollywood makes light of the real and insidious history of discrimination and sexual abuse in show business. More often than not it just strains the suspension of disbelief.

As much as I like the premise of Hollywood, the last couple of episodes don’t skillfully unwind the thicket of problems created in parts 1-5. All the issues just sort of melt away in a happy Hollywood ending. It seems the writers could not imagine a way out of the compelling revisionist history they created without laying on the Hollywood schmaltz with a trowel.

The most enjoyable parts of the series are the behind-the-scenes melodramas showing the underbelly of studio-era Hollywood. This starts with Ernie West’s service station, based on Scotty Bowers’ real-life Richfield Oil station on Hollywood Boulevard, which did indeed “service” its clients. This is the Hollywood of such bawdy figures as Tallulah Bankhead and Noël Coward. The Hollywood of George Cukor’s infamous pool parties, flush with naked footballers from USC. Of Henry Willson and his lunkheaded stars, objectified for their muscles as much as any starlet was objectified for her curves. “We can always add the acting later,” Willson was known to say.

At times, the show is like Kenneth Anger’s infamous alternative history, Hollywood Babylon, with its portrayal of the film capital as a den of depravity. It would have been a fascinating moment in history to observe, even though partaking in such decadence led many talented people down a dark path to self-destruction.

But at least with all of our stars, they successfully—and against all odds–pull themselves out of the pit and find their way to the end of the rainbow.

To be both known and loved has always been a nearly impossible feat in Hollywood. Especially once someone gets a few hits of fame and money—the drugs show business has always handed out like candy.

This is the point of a moving scene in Episode 3 between producer Dick Samuels (Mantello), who has been followed into a cottage at one of Cukor’s pool parties by a young Rock Hudson looking for his first break in the movies. At first, Samuels seems ready to accept the terms of the deal (set up by Willson) of sex with Rock for the actor’s chance at stardom. But then a pang of conscience hits Samuels, and he stops Rock with an anguished monologue:

“Year after year I’ve been pretending to be someone else…You play the part that they’ve written for you, and then suddenly, it’s just too late, you’re lost. And the person that you are, the person that you wanted to be is just swept far out to sea, and you’re standing on the shore, and you’re watching the person go under and there’s nothing you can do about it, it’s just too late. You hate yourself because you’re the one responsible for letting it happen, because you wanted people in this town to love you, to accept you.”

The Hollywood sign plays a role in the plot of the film Meg, and perhaps here lies a clue about how to interpret this revisionist history. Originally, and as it is portrayed in the show, the sign spelled out “Hollywoodland.” (Its original purpose was as a billboard for a housing development built in the 1920s.) It wasn’t until 1949 that the “land” was taken off the end, and the Hollywood sign took the form we know today. Seeing the original sign—familiar, yet somehow different–transports us to an alternate Hollywood, maybe in another place or another dimension. A show business capital where people make it on talent alone, rather then their race, or gender, or sexuality.

As unrealistic as the ending seems, maybe Ryan Murphy and crew wanted to create a dreamland, where everyone could be both truly known and truly loved. Maybe he wanted us to imagine such an outcome and see it played out on screen. And then maybe, inspired by the guts and gumption of the supremely likeable cast, we might be inspired to change things in our own way, in our own little corner of the world. Perhaps the happy ending isn’t really handed to us in Hollywood, perhaps it’s ours to supply.