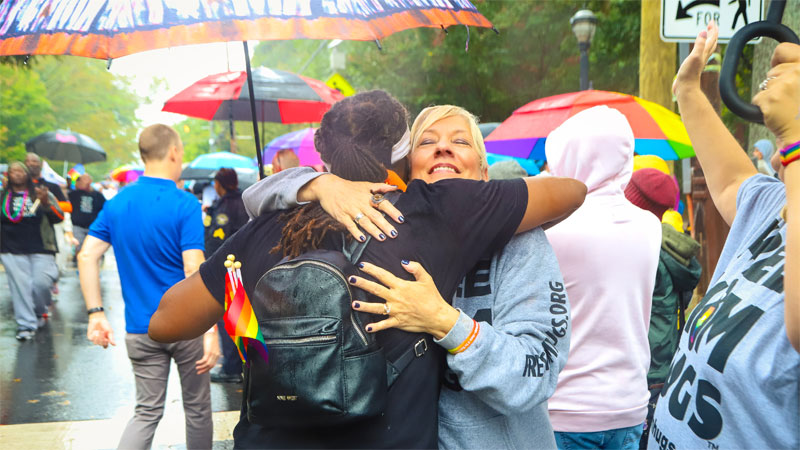 We’re not going to see changes in our legislative halls until we change what we hear in the pews from the pulpits of our churches.

There are over 30,000 conservative, Christian mothers in America who accept their LGBTQ children. Spread across the country but connected through private Facebook groups, they help one another overcome the teachings of their churches and call themselves “mama bears”—because of how ferociously they fight for the civil rights of their children and the entire LGBTQ community.

Although they may have grown up as fundamentalist, evangelical Christians, mama bears are willing to risk losing friends, family, and faith communities to keep their offspring safe—even if it challenges their belief systems and rips their worlds apart.

Mama Bears is an intimate, thought-provoking exploration of the journeys taken by Sara Cunningham and Kimberly Shappley, two “mama bears” — conservative, Christian mothers whose profound love for their LGBTQ children has turned them into fierce advocates for the entire queer community — and Tammi Terrell Morris, a young African American lesbian whose struggle for self-acceptance perfectly exemplifies why the mama bears are so vitally important.

Ryan Parker: So unbeknownst to either of us, we watched the new documentary, Mama Bears, around the same time, and it might be the only movie we’ve both watched during this year’s festival. Let me start with a few quick questions: what drew you to it, did you watch it on the platform or in person theatrically. If the latter, how was the audience reception; and, finally, what’s one of your big takeaways from it?

Benjamin Griffin: I did not see it with an audience, unfortunately as the Q&A session would have surely proved powerful. I was drawn to the intersection of faith and fidelity to LGBTQ loved ones, a theme the movie explored powerfully. I thought it was a very strong documentary that wisely focused on the beauty of the individual, regardless of what their religion tried to deny them.

RP: I think I’m at a point in my spiritual and theological development where radical love and inclusion overrides everything. Now I’m not saying that I embody that consistently, or even remotely near anything that might be consistent, but as a place of theological groundwork, it seems the only place to start. What I find intriguing about this film is that the families depicted here (or at least most of them), chose love over dogma when their children came out to them. And what’s even more interesting and moving is some of these parents’ desire to stay in fellowship with the very communities that would seek to alienate or demonize their children. I don’t know if I could do that.

In our conversation about this film, you mentioned something about these families’ position being one of “meet us where we are,” or something to that effect. Can you say more about that?

BG: Yeah, what I found really effective about the film is that while these were families of sincere faith, it never gave the conversation over to the communities that had more or less abandoned them. It could have easily devolved into arguments about scriptural interpretation or sexual ethics but, instead, focused first and foremost on how each individual was known and loved in their own family. In a way, it felt like they were inviting their old communities to stop dictating who they should be and inviting them instead to truly see them as they are.

RP: One other question I had involved the ethics of documentary, particularly around the inclusion of the young trans girl. And by that, I don’t mean the morality of being trans, but rather the depiction of this part of the young girls’ journey at this time in her life. The other “characters” in the film, if I recall correctly, are older and seemingly of an age to consent to and fully understand their participation in a project like this. There were a few places in the film where her part in the film felt a bit exploitative, perhaps like a progressive version of the ways in which conservatives use children to argue AGAINST LGBTQ or reproductive rights. I don’t mean to be overly critical here, but that was a feeling I had while watching the doc. Does any of that resonate with you?

BG: I can see where you’re coming from, but I think one of the more powerful ways to present the lived experience of trans or non-binary people is to embrace the inherent fluidity of their experience. She may grow up to embrace any manner of expression but allowing her to be seen as she is feels less exploitative to me and more celebratory. I think it’s important to show that this can manifest in childhood as a form of expression and experience, and the film does a good job refusing to judge or dictate how that should be.

RP: That’s a very good point, and the film is certainly a judgment free zone. And your comments make me think about the power of film to alter how we see people in the world. Margaret Miles and S. Brent Plate once wrote, “Film, as a medium of mass reception, promotes, negates, and generally alters our perception of identities, especially with regard to gender, race, ethnicity, and religion.” Setting aside that mild concern I raised above, it’s clear that we need more films like this or, rather, more people should be watching films like this.

BG: Exactly. As I was watching I couldn’t help but think about the passage in Corinthians where Paul talks about “seeing through a mirror darkly.” I take this not simply as a sentimental piece of marriage advice but as the way we are called to see one another as Christ sees us. This films feels like a challenge to the communities these mother’s left behind (or fight to stay in) to not debate them, or berate them, but to simply see them and to love them as they are.

Mama Bears, premiered at SXSW22 and will, hopefully, release widely later this year. For more information on the film, visit https://mamabearsdoc.com.