It’s only day two here at SXSW, but 2 Pigeons will likely be not only my favorite Midnighter, but one of my favorite films overall. It’s a truly unique narrative that’s wickedly funny and grotesque and a perfect example of the effectiveness of single-location filmmaking.

Hussein (Mim Shaikh) is a real estate agent in London. He wears flashy suits and jewelry, smokes a lot of weed, plays video games, watches porn, and argues with his girlfriend, Mel (Mandeep Dhillon). He lives in a nice little flat, but he’s unaware that he’s got another roommate, a squatter named Orlan (Javier Botet). Orlan is a tall, lanky, seemingly unwell inhabitant, who hides in a crawl space in the closet when Hussein is around. When he’s gone or asleep, Orlan creeps around the party and does disgusting things with Hussein’s belongings or wrecks his life by switching up his medication or deleting his appointments from his calendar. Orlan’s vendetta becomes increasingly invasive and drives a wedge between Hussein and Mel, who eventually moves out. As Hussein’s life spirals out of control, he suspects that a ghost has been haunting him. 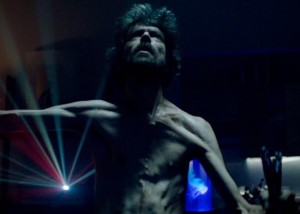 I’m a huge fan of single location narratives and how it shapes filmmakers’ storytelling. Even though Hussein lives in a small London flat, it never feels confining. Orlan’s slender frame lets him slip in and out of the smallest of spaces and hide in the thinnest of shadows. The flat seems to have been constructed on a soundstage, which allows cinematographer Ben Moulden to play with camera angles and movement in order to heighten the suspense.

Where the film excels with its aesthetic, it dips a bit with the narrative as its theme of revenge arrives a little too late. However, it concludes with a hilarious cliffhanger and Hussein’s life in the balance. As grotesque as Orlan’s actions are, there’s something magnetic about his presence. 2 Pigeons is a film that will turn your stomach and make you want to look away. But you won’t forget it any time soon either.