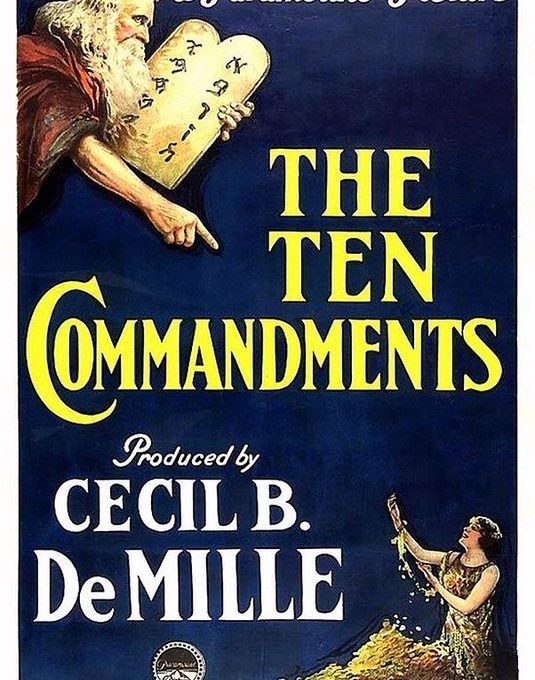 Richard here. Adding some more wisdom culled from the notes of my dissertation, here’s the account of Cecil B. DeMille’s first foray into biblical film, his 1923 silent version of The Ten Commandments.

Cecil B. DeMille’s The Ten Commandments of 1956 is the most well known biblical epic of the 20th century. For those who saw it in the theater in the fifties or have watched it on television as an Easter/Passover tradition since 1973, Charlton Heston will always be Moses, and the scenes shot in the Sinai desert with thousands of Egyptian extras will be the indelible images of the Exodus.

But few people know that the 1956 film was to some extent a remake, as DeMille had already shot the story of Moses and the Israelites in a spectacularly popular silent version of The Ten Commandments, released in 1923. It was DeMille’s first big biblical feature, and it forever changed the direction of his career and his legacy as a director.

Prior to 1923, DeMille had become known for sex and society films with titles like Old Wives for New (1918), Don’t Change Your Husband (1919), and Why Change Your Wife? (1920). A particular DeMille trademark was scenes involving naked women in bathtubs. So when he held a contest in 1922 for fans to name the theme of his next film, it was a bit of a surprise when he chose the suggestion, “If you break the Ten Commandments—they will break you” as the guiding quote for his new epic. Many wondered if DeMille was the proper director to create a film about a scriptural story held sacred by both Jews and Christians.

In order to drive home the point of the continuing importance of the Decalogue, DeMille and his scenarist, Jeanie MacPherson, created a two-part story in which the Israelite Exodus acts as a frame for a modern morality tale about two brothers, their pious mother, and their differing views on the relevance of the Commandments in the Roaring Twenties.

In a 90-minute feature, this meant DeMille had no time to spare, with about 45 minutes to tell the story of the Exodus and Moses’ receiving the Ten Commandments on Mount Sinai. So the 1923 version is missing many classic scenes from the 1956 film, like the basket on the Nile, the burning bush, and Moses’ discovery of his Hebrew origins. (Not to mention the love triangle between Moses, Rameses, and the throne princess Nefretiri.) The story picks up en medias res at the plagues and jumps quickly to the Exodus and the parting of the Red Sea.

Theodore Roberts plays Moses, locking horns with George DeRoche as Pharaoh. At age 60, Roberts plays a considerably older prophet with a long Father Time beard, but still pulls off a dynamic performance. DeRoche is beefy and formidable, but possesses none of the Oriental androgyny and cold arrogance of Yul Brynner. In this version Moses’ sister Miriam (Estelle Taylor) conspires with Dathan (Lawson Butt) to build the golden calf—an unfair narrative invention which negates Miriam’s role as a woman-hero of the Old Testament. In the orgy scene, DeMille lets loose his lady-in-the-bathtub fantasies, filming Miriam writhing on the calf idol as the Israelites descend into graphic decadence.

The outdoor scenes in “Egypt” were filmed on a massive set built on the Guadalupe-Nipomo dunes south of Santa Barbara. For the weeks of filming on the California coast, DeMille constructed a tent encampment of 3500 actors, technicians, and extras, divided into 14 companies of men and 7 companies of women, and governed by strict rules against alcohol, gambling, fraternizing, and coarse language. Among the extras were 225 Orthodox Jews, hired to “look like their ancestors.”

DeMille’s exterior set for the Pharaoh’s city was 750 feet wide by 109 feet high, and included an avenue of 21 plaster sphinxes. He ordered 250 chariots for the chase scene to the “Red Sea,” along with the horses to pull them, and stables to include 5,000 donkeys, sheep, goats, and camels. The cost of shooting the film quickly spiraled out of control, nearly causing Paramount to pull funding from the film. One desperate missive from producer Adolph Zukor in Los Angeles was sent to “Camp DeMille” by telegraph:

“C.B.—You have lost your mind. Stop filming and return to Los Angeles at once.—A.Z.”

The Ten Commandments was the first studio film to use Technicolor. In order to get in on DeMille’s epic, Technicolor offered to shoot sections of the Exodus scene alongside the regular black and white cameras for free. If DeMille didn’t like the footage, he didn’t have to use it. The Technicolor footage was edited into the mostly black and white film, along with traditional toned tinting and the Handschliegl process of hand-coloring elements of a scene frame-by-frame.

The action sequences in the 1923 version are every bit as exciting as the 1956 version. If anything, the desperation of the Egyptians as they chase after the Israelites seems more intense as horses, chariots, and riders go tumbling over the powdery dunes.

The special effects of the fiery pillar and the parting of the Red Sea are enjoyable for their low-tech innovation. The “pillar” of fire was more of a curtain – actual flames superimposed on the screen through double exposure. The parting of the Red Sea was accomplished by use of molded gelatin set on top of a metal table, melted by gas jets. Running the film in reverse in fast motion achieved the sense of the waters parting and standing at jiggling attention. Certain low-budget effects and anachronisms, like the Children of Israel holding staffs with Stars of David (King David didn’t come along until centuries later) and toy horses and chariots sinking in a shallow tub of water after being “drowned” in the Red Sea, only add to the charm of the feature.

Make no mistake, however, this spectacular telling of a biblical narrative was like nothing anyone had ever seen at the time. According to reports of the New York premiere in the Times, the audience applauded at the parting of the Jell-O sea. The Hollywood opening, held, fittingly, in Grauman’s Egyptian Theater, complete with a Vaudeville-style live prologue, “A Night in Pharaoh’s Palace” must have only added to the spectacle.

With false modesty, DeMille dismissed the film’s unheard-of cost of 1.5 million as the “cheapest picture that was ever made.” As he said in a December 23, 1923 article in the New York Times:

“This spectacle will show people that we have an obligation to the public and that motion pictures can be more than mere stories […] The reason for the spectacle in ‘The Ten Commandments’ is to bring force to the picture […] The idea of the spectacle as it is presented is worth a million.”

The modern story of the McTavish family—the good son John, the bad son Dan, and their Bible-wielding mother—is less interesting, with the exception of one breathtaking scene shot from the rising steeples of Saints Peter and Paul Church showing a bustling 1920’s San Francisco beneath. DeMille’s desire to make a more complete story of Moses without the modern interruption was part of why he re-shot the film in 1956.

After shooting wrapped on the dunes outside Santa Barbara, the sets were dynamited and bulldozed into the sand. The area is now a protected seashore and wildlife refuge, but beachcombers sometimes find artifacts from “ancient Egypt” in the dunes. For years, there have been rumors that vast sections of the great set still sit intact beneath the sand, but film historians and archaeologists have been unable to get either the permission or the funding to excavate.

The use of such vast resources of material, time, and people set a strong precedent for biblical epics to come, whether directed by DeMille or not. Whatever the religious message of the first Ten Commandments, the message to Hollywood was clear: When it comes to filming the Bible, bigger is better, and no cost is too great.

A restored version of the 1923 Ten Commandments is part of the 3-disc 50th Anniversary Collector’s Edition of The Ten Commandments, released by Paramount Home Video in 2006. For a highly readable recent biography of DeMille, including accounts of the making of the 1923 and 1956 films, see Scott Eyman’s Empire of Dreams (reviewed by Ryan last year) published by Simon and Schuster in 2010.