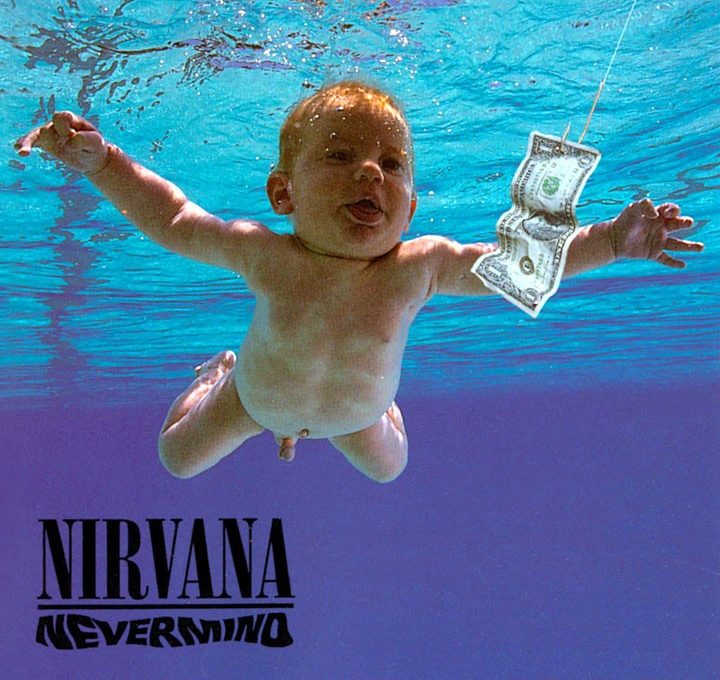 In Seattle this past weekend, I had the opportunity to take in the Experience Music Project’s Nirvana exhibit. The show at Microsoft founder Paul Allen’s personal rock-n-roll hall of fame draws connections between the iconic grunge band and the blossoming of the Seattle sound in the late 80’s and early 90’s. It marks the 25th anniversary of Nirvana’s first album and the 20th anniversary of Kurt Cobain’s death.

At one particular moment in the exhibit I was struck by a spark of a memory while staring up at a Nevermind vinyl album cover. Maybe it was the angle of the artifact, just above my head, or the visual imprint of that waterlogged baby floating in a wavy field of chlorinated blue, but it reminded me of when I first saw the album on the top-of-the-charts wall at Tower Records in London during a school band trip over New Year’s in 1992.

I didn’t know much about Nevermind except that this was supposed to be that “new grunge thing,” or perhaps a manifestation of “alternative rock” as it was being called. Growing up in the Northern Kentucky suburbs pre-Internet, you didn’t hear about an underground culture until it went above ground. And despite notable 90’s bands like Over The Rhine and The Afghan Wigs, the EMP will never build an exhibit celebrating the “Cincinnati Sound.”

I probably heard about grunge from an article like Rick Marin’s infamous New York Times Style section piece from November, 1992, “Grunge: A Success Story.” The article has been endlessly mocked, especially for its ridiculous sidebar, which quoted a lexicon of grunge that was completely made up by a former SubPop record label staffer. Surely a reporter for the Grey Lady should have known he was getting played when told the grunge term for “hanging out” was “swingin’ on the hippety-hop.”

But sidebar aside, the article is an incisive reflection on the appropriation of subcultures by mainstream culture. Marin questions the possibility of the existence of an actual subculture, when economic forces move in so quickly to solidify and monetize a style. Before anyone can wrap their heads around a movement, Marc Jacobs is putting grunge on the catwalk and Timberland shirts are flying off the shelves. There’s exploitation from above and selling out from below.

“We have a pretty big role in spreading something from the underground to the heartland,” said John Canelli, an MTV executive quoted in Marin’s Times article. “But,” Marin sagely observed, “a band playing the heartland isn’t underground anymore.”

The Times article actually challenged the celebrated legend that grunge was the last true youth movement in rock, when the underground conquered the mainstream. This unquestioning heroic narrative was pretty much what the curators chose for the exhibit. The title of the exhibit says it all: Nirvana: Taking Punk to the Masses. As much as the Times got punk’d by the punks, the Style section of 1992 seemed more aware of the complex interaction between subculture and mass culture than the museum exhibit 22 years later.

Walking through the exhibit, it was unnerving to see Cobain’s art class pencil drawing of a fascist Ronald Reagan, an image that could have been scrawled by any punk teenager in my high school, preserved as a relic of a rock-n-roll martyr. The green sweater worn by Cobain in the “Smells Like Teen Spirit” video that mocked the corporate rock of the 80’s hung clean in a glass case, like Cobain’s mother had just washed it and left it out for her son to wear. The winged In Utero statues from Nirvana’s last tour hovered over the exhibit like death angels with their anatomy statue guts hanging out. The overall feeling I got from the exhibit was a sense of hurt and loss.

I don’t believe my feeling was because of impending middle age or wistful reflection of the passage of time. I think it was because the pain that grunge captured for my generation has not passed.

I remember when I first heard the term “Generation X.” Again, it was probably from one of those asshat reporters in a heartland publication like USA Weekend. According to the article, X-ers wore ratty flannel shirts and black boots as an ironic working-class uniform for a generation of slackers. The sarcastic tone of the piece didn’t blunt my enthusiasm at hearing my chronological tribe named for the first time.

“Did you know we have a generation?” I told my friends around the cafeteria table after reading the article. “Like a ‘Talkin’ Bout My Generation’ generation?”

Having been raised on a steady diet of Boomer TV retrospectives about the Summer of Love and Woodstock, it felt good to have something cultural that was our own. Even if it was being dismissed by our elders as meaningless whining from a coddled generation. Andy Rooney’s screed after Cobain’s suicide, “What would all these young people be doing if they had real problems like a Depression, World War II or Vietnam?” was portrayed at the time as the ranting of a cranky old man. But it could just as easily have been written by a Boomer commentator, with so many of them pitying us since the “real” revolutions in culture had supposedly all taken place during their generation.

The EMP is a temple built to this Boomer lore, and another exhibit in the museum adds a compelling note of generational comparison: Hear My Train A Comin’: Jimi Hendrix Hits London. Both Hendrix and Cobain were Seattle-area musicians who played left-handed guitar, and tragically, are members of rock’s 27 club. But the similarity ends there.

The most dazzling feature of the Hendrix exhibit, besides the always-dazzling videos of Hendrix playing live, were the displays of the psychedelic Carnaby Street getups he wore on stage. These stood in stark contrast to Cobain’s thrift store threads displayed down the hall.

Two other sacred Hendrix emblems were in the exhibit – the white guitar he played at Woodstock and a fragment from the guitar that he ritually immolated at the Monterey Pop Festival. With the explosion of fashion and music, the revolutions in sexuality and civil rights, this exhibit made the 60’s seem, as many Boomers have told my generation, like an incredible time to be alive.

So perhaps Generation X-ers and Millenials could be forgiven if we pull a Rooney on Hendrix: “How could you play such a gnarled protest of a National Anthem and then die choking your own vomit at a time of unprecedented growth of the middle class, increased investment in infrastructure and education, and dismantling of the American Apartheid state? You were the most celebrated figure of a celebrated era. You had so much to live for.”

Taking this tack to Hendrix’s music, and perhaps his self-destruction would of course ignore the historical context of America’s “liberal” patriarchy sending 58,000 Americans – disproportionately African-Americans – to die in a war of choice in Southeast Asia.

But the pain represented in the pop/punk of the 90’s was real too. It was based on my generation’s sense of loss from the crumbling of institutions – family, religion, government, education, and the economy – that Boomers had taken for granted. And in the face of today’s historically dysfunctional government, continual wage stagnation, and increasingly violent right wing, grunge now seems more prescient than whiny.

For many X-ers and Millennials, except for a brief respite during the Clinton years, recession and economic decline have become a permanent part of our lives. We eventually got our Asian war of choice – two of them, actually – with most of the burden of fighting falling on lower-income X-ers and Millennials. When it came to college education, Boomers got grants and heavily state-subsidized tuition, X-ers and Millennials got unsubsidized student loans.

During the most recent government shutdown (fueled by conservative Red State Boomers who refused to pay taxes for anything but their own Social Security and Medicare) I found solace in the grunge bands I wasn’t quite aware of in my youth. Maybe guitar-strewn nihilism wasn’t such a bad position to take after all:

As nice as it was to see Gen X’s cultural contributions lauded in “Taking Punk to the Masses,” putting this movement behind glass seems premature. The wounds are still too raw, the lyrics and power chords still speak to something real; we X-ers and Millennials aren’t done moshing sense out of our lives.