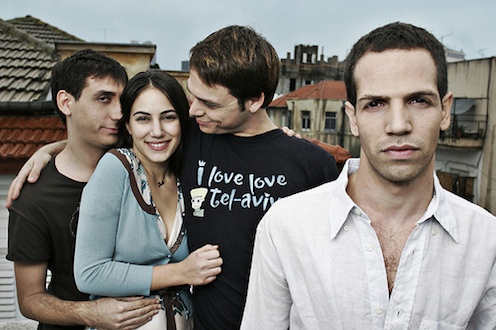 Israelis have a strong sense of holy space. Solomon’s Temple, now just a venerated wall, was not simply a place to worship God, but God’s dwelling place–God’s apartment, if you will. Knowing that God lives in a particular place explains the willingness to sacrifice all for the sake of a toehold on the Mediterranean that’s more than half desert, and the conflict over who controls the land. The Bubble, the third full-length film by Israeli director Eytan Fox, is a story of a group of young people trying to find a holy space–their own promised land in the Promised Land.

Fox has become one of Israel’s most famous directors, particularly through his films’ popularity on the gay film and indie festival circuit. His films have gained an international following for their witty but realistic portrayals of gay Jews attempting to carve out individual identities while grappling with the daunting constants of Israeli life: military service, the conflict with Palestine, and the overwhelming shadow of the Holocaust.

“The Bubble” is a local nickname for Tel Aviv, the most cosmopolitan city in Israel, referencing its separation from the conflicts that roil the rest of the country. It was filmed in the neighborhood that Fox and his partner in life and writing, Gal Uchovsky, call home. Perhaps the most important character in the film, Sheinkin Street, seems a little like Sunset in West Hollywood, with artists, gays, and celebrities mixing it up in the cafes, nightclubs, and boutiques in a never-ending contest of fabulousness. One can easily forget, watching the long-haired male and short-haired female, pierced, tattooed, fashionista, smoking, drinking, screwing denizens of the neighborhood, that this is one of the most conservative religious countries in the world, or that it is perpetually at war. That sense of alternate reality is precisely the point of the place.

The promise of nightclubs and hookups is what draws Ashraf (Yousef Sweid), a young gay Palestinian, into the Bubble, where he meets Noam (Ohad Knoller), a Jewish clerk at a music store. After a one night stand, Ashraf is welcomed into the company of Noam’s easygoing friends, including Lulu (Daniela Virtzer) and Yelli (Alon Friedman), and given an illegal job in one of the local cafes. A passionate, but star-crossed, relationship ensues, an Israeli-Palestinian Romeo and Juliet. As the friends make the rounds to favorite nightspots and restaurants, Ashraf remains on the down low, as an Arab, not as a gay man.

The threat of discovery sends Ashraf back to the Territories, where we get a look at his home life. Fox’s films frequently switch language with location, his characters moving easily from Hebrew to Arabic, and to German, French, and English. With the help of subtitles, one feels initiated into a cosmopolitan club of earnest, sexy young people whose common search for love and personal integrity transcends global boundaries.

The experience of Ashraf’s family is eye-opening for Westerners, and for Noam and Lulu, who find Ashraf while posing as a French news crew. We see the grungy poverty of the West Bank through their eyes, but also the intense ties of family, hospitality, and tradition. The film is sympathetic toward Palestinans, but still paternalistic. Having Ashraf’s sister marrying a Hamas leader named Jihad is a bit much. And one could get the sense from the film that the major problem Israelis have with the Palestinians is their homophobia.

The making-of feature on the DVD, which was broadcast nationally in Israel, reveals that everything was shot on location, perhaps the most daring feat of the film. The filmmakers constructed an Israeli checkpoint near the green zone and bused in Palestinian extras to cue up for the camera. A male-on-male make-out scene is shot in an Arab neighborhood. One of the favorite cafés of the filmmakers, famous for its sweet potato pancakes, was dismantled and scarred with broken glass and burn marks to represent the effects of a suicide bombing. Throughout the filming, the producers and director had to continuously negotiate the religious sensibilities of their locations, not quite telling the Muslim townies or the yarmulke-wearing ambulance drivers that the film they were going to be in was a gay romance.

The film is both critical and celebratory of the “bubble” mentality of the characters. The three Israeli protagonists are against the occupation of the Palestinian territories, but particularly feckless in their resistance to it. They wonder aloud why they can’t get Palestinians to come to meetings of their left-wing political group, yet have little awareness of how difficult it is for Arabs to get across the border checkpoints to do anything in Israel. The group’s idea of political protest is to hold a “Rave Against the Occupation” on the beach, as though downing Red Bull and ecstasy with fellow Jews will bring about better conditions for anyone in the West Bank.

And yet, as Fox states in an interview, for many Jews in his position–secular, gay, artistic–the alternative to living in the bubble is leaving Israel behind altogether. If it were “love it or leave it” America, the answer Fox would get to that objection would be “good riddance.” But in Israel, the sense of homeland and holy space depends on Jews living in the land. Every Jew that leaves, particularly the creative ones that can imagine some kind of future for the country besides religious fundamentalism and the military state, leaves the place bereft of both citizens and ideas.

For those of us that live in “the bubble” in places like the San Francisco, New York, or L.A., the criticism and celebration of our distinctive communities could be the same. Perhaps concentrating many of the country’s political liberals, educated class, artists, gays, and other non-conformists in coastal colonies far from “Middle America” creates utopian communes removed from any real contact with the nation’s culture. (I’m reminded of Berkeley’s ridiculous “Nuclear-Free Zone” signs posted at the city borders.) But perhaps these “bubble” communities are essential for those who have no place to go in Red State America where they can be themselves. Places like the Castro, Berkeley, West Hollywood, Cambridge, Hyde Park, Chelsea, and Williamsburg are blessed enclaves of tolerance for these seekers. As somewhere to survive and thrive, to imagine a more expansive view of human be-ing, and perhaps to share that awareness with the rest of the world through art, writing, or filmmaking, these places have become their own Promised Land.