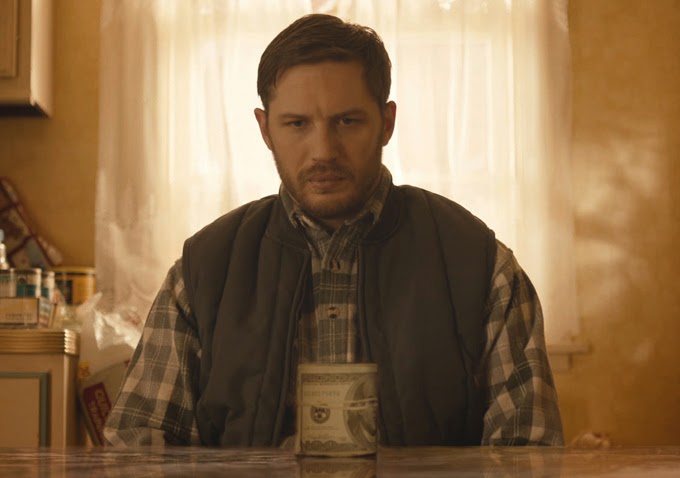 It’s rare that I go see a film based solely on one actor. There are actors that I really like, but the type of movie might keep me away. I’d watch Tom Hardy eat soup. His latest film, The Drop, is a good one made even better by yet another profound performance, which is crucial because he is the linchpin in a morally complex narrative.

There are drop bars around Brooklyn where mobsters launder their ill-gotten gains. The bartenders hold the money in a safe until someone comes to pick it up, no questions asked. The locations change every night, and when it’s your turn, you better not lose it. One such bar is Cousin Marvin’s. Marvin (James Gandolfini) used to own the bar and tried to run his own small crew of gangsters. A more powerful mob pressed, he flinched, and now they own it. His cousin Bob (Tom Hardy) still tends the bar, keeps quiet and out of the way, and pleads with Marvin to let bygones be bygones. Marvin still simmers over the loss. When a couple of thieves steal money from Cousin Marvin’s, it sets off a slow burn between Marvin, Bob, and the mob. As the story progresses, we learn about the community’s violent past and quickly suspect that Marvin may be up to more than Bob knows.

Hardy’s performance is as captivating and mysterious as the puzzling narrative demands. It’s a cliche to say, but few actors working today “become” their characters quite like he does. Is Bob just a simple guy, is there something missing upstairs, or is he a conniving, potential threat? The film keeps us pitching us back and forth between these options until the very end. Gandolfini, in his last performance, gives us more of that quiet rage around which he built a stellar career.

Unlike a lot of gangster films, The Drop serves up some intriguing moral complexities. Cousin Marvin’s, as a drop bar, stands in as a microcosm of its larger surroundings and allows us to the look at the layers of guilt among its regulars and other community members. The drop bar is a place where illegal activity takes place. The mobsters who launder their money through them are at the chop of the guilt chain while its patrons hover somewhere at the bottom. Of course, the balance of power also mirrors this setup. The mobsters are guilty of a host of sins from theft to murder and every torturous thing in between. Cousin Marv, who once organized a crew of his own, is guilty of both similar past sins and of actively facilitating the drops. The bar patrons who look the other way know that something is going down, but they value the bar as a place they can meet, drink, watch the game, and reminisce about the glory days. As one of them tells a snooping detective, “Don’t fuck with my bar.”

But Bob is something slightly different, even as he participates in this network while trying to hold himself above or apart from it. WARNING: SPOILERS FROM HERE ON OUT! Bob is a lovable character, who stands up for the weak, abused, and neglected. He rescues Rocco, a pitbull puppy that had been left to a horrendous fate. He befriends a single, vulnerable woman (Noomi Rapace), who helps him care for Rocco. When threatened with violence, he flinches but never responds in kind. The rumors that swirl around the community about the death of Richie Whelan, a kid whose gambling debts got out of hand, unnerve him too.

But as the film concludes, we learn that Bob’s naive demeanor is a front for a cold-blooded killer. He actually killed Richie to cover up Marv’s wicked ways. In the end, we’re victim to a cinematic bait and switch as we’ve been sympathizing with and rooting for a “hero” who is actually the most frightening villain of the bunch. At least we know the threat of the mobsters when we see them, but, to paraphrase what a detective tells Bob at the end of the film, we never see him coming.

The Drop (106 mins.), rated R for some strong violence and pervasive language, is currently in theaters.