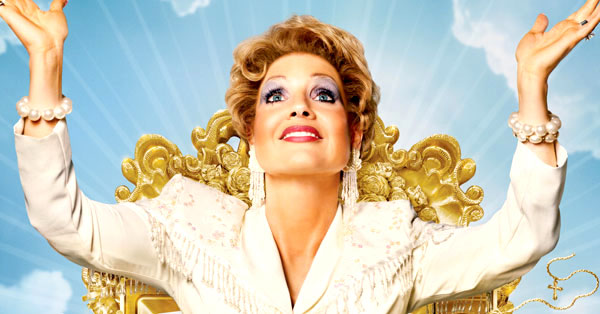 The Eyes of Tammy Faye (in theaters now) dramatizes the life of Tammy Faye Bakker, wife of the duo that started PTL (Praise the Lord) ministries, an evangelical media and theme park empire that came crashing down among sex scandals and financial improprieties in 1987. It’s a passion project of Jessica Chastain, who worked for ten years to get the film made, and plays Tammy Faye. It’s directed by Michael Showalter, who wrote and acted in comedies like Red Hot American Summer (2001), and has recently become known for directing films about quirky outsiders (Hello, My Name is Doris, 2015; The Big Sick, 2017).

The drama expands and dramatizes the excellent 2000 documentary of the same name directed by Randy Barbato and Fenton Bailey. RuPaul narrated the documentary, and it was one of the early successes for Barbato and Bailey’s World of Wonder Productions, which today produces RuPaul’s Drag Race. So, yes, Tammy Faye helped launch a drag queen entertainment empire.

Jessica Chastain captures Tammy Faye’s indomitable spirit, which seemed to have equal parts optimism and naiveté when it came to believing in her husband’s ministry. Her transformation into Tammy is helped along by her chirpy, Midwest-by-way-of-Sacramento voice and a ton of makeup and wigs. But underneath the prosthetics, she shows us a character of deep heart and genuinely good intention. Andrew Garfield embodies the darker story arc of Jim Bakker, from goofy bible college student to ambitious itinerant preacher, to something far more manipulative and monstrous. Garfield shows us the man who bilked millions out of his followers by promising if they just gave a little more each month, they’d be a little more blessed by God. (This is the same man who recently settled claims against his current TV church for selling “Silver Solution” that he said would fight Covid. Gifters gonna grift.)

One of the most remarkable moments dramatized in the movie is an absolutely true segment done on PTL in 1985, when Tammy interviewed Steve Pieters, a gay Christian pastor with AIDS. Tammy had to do the interview via satellite because of Pieters’ medical condition, but she let her audience know if he had been there in person she would have embraced him. “How sad,” she said, trademark mascara running, “that we who are Christians, who are supposed to be the salt of the earth, that we are who supposed to love anyone, would be so afraid of AIDS that we would not put our arms around someone and tell them that we care.” This was at a time when the general public knew so little about AIDS that Ryan White was being banned from attending his middle school in Indiana.

The film captures the embryonic stages of two of the most powerful developments in American Christianity over the last 50 years—the Religious Right and the Prosperity Gospel. The film portrays Bakker as part of a trio of media preachers with growing power during the Reagan years, including Jerry Falwell (Vincent D’Onofrio) and Pat Robertson (Gabriel Olds). Bakker was less interested in fighting culture wars than the other two, but his satellite-powered TV ministry that reached an audience of 20 million undoubtedly contributed to the overall growth of the movement.

What Jim and Tammy did best was raise and spend money. They preached a Prosperity Gospel that suggested there was no conflict between laying up treasures in heaven and houses, cars, and designer clothes on earth. This “theology”—an absolute heresy from the true teachings of Jesus—continues to this day through TV preachers like Joel Osteen and Kenneth Copeland. These guys mostly pay their taxes and stay out of legal trouble, but continue to build their ministries and lavish lifestyles on the backs of people who send in their social security checks as a down payment on heaven.

The chief objection I have with the film is that it follows a fairly predictable biopic storyline of rise, fall, and redemption. We’ve seen this story before—most recently in Ryan Murphy’s Halston miniseries for Netflix—where the scrappy outsiders’ success leads to screaming fights in big houses as someone spills the drug stash all over the white shag carpet. The biopic format gives us the illusion of objectivity and keeps us from investing (becoming “partners,” as Jim and Tammy called their followers) in what’s happening on the screen in such a way that we might actually be implicated. We believe in the performances because of Chastain’s and Garfield’s commitment to their characters, but I wonder if the filmmakers might have tempted us into believing in—or at least understanding—what caused so many people to sacrifice so much for Jim and Tammy’s ministry.

The film also suggests strongly that Jim Bakker was/is a closeted gay man or bisexual. I like a good outing of a Christian hypocrite as much as anyone, but many of the allegations of Bakker’s homosexuality were made by Falwell and others during the pile-on phase of the fall of his ministry. My own activist work through Soulforce often confronted Falwell on his homophobic rhetoric, and I know that when it came to anything having to do with LGBTQ issues, he was a compulsive liar and conspiracy theorist. And frankly, as a member of the LGBTQ community, I have no desire to count Jim Bakker as one of “us.”

I strongly recommend watching both the drama and the documentary, as they seem to complete each other. The drama recreates the camp and the spectacle of the PTL days, but nothing compares to seeing the real Tammy living her life after her fall from grace. Many of the on-air PTL network moments in the film seem so outrageous that viewers may wonder if they really happened. The documentary provides the video proof, including Tammy’s feature with a doctor describing an inflatable penis implant for impotent men, the wild productions surrounding Tammy’s gospel songs, a cringe-inducing scene of Tammy wandering off to admire a beach set while overmedicated, and the grisly spectacle of Tammy singing “The Sun Will Shine Again” during the final PTL broadcast after all the couple’s scandals had been exposed.

The documentary gives a quick and witty rundown of the history, but the drama gives a fuller picture of Jim and Tammy’s origins. We see that Tammy’s love for outsiders came from being an outsider herself, particularly as the only daughter of the first marriage of her Pentecostal mother Rachel (played with severe prairie stoicism by Cherry Jones). We also see the way Pat Robertson used Jim and Tammy to grow his own CBN network (Jim was the original host of the 700 Club) then took everything they had started for his own benefit.

The two films together give us a fascinating view of Tammy Faye, one of the quirkiest figures in the history of Christendom, and forces us to see her as being far smarter, far more genuine, and far more loving than our collective memory recalls.