Better late than never, Richard and I finally get around to discussing last year’s best blockbuster…and probably the best blockbuster of 2016, Star Wars: the Force Awakens.

“It’s a bad, bad sign when a movie director begins to think of himself as a myth-maker.”

Richard Lindsay: Star Wars: Episode VII—The Force Awakens is a film I’ve been waiting to see for more than 30 years. I didn’t realize it until I saw it, but part of the reason Episodes I-III had no effect on me was that I simply didn’t care about Darth Vader as a character. I cared about Luke and Leia, Han and Chewie, C-3PO and R2-D2. I wanted to know what happened to them after Return of the Jedi. Lucas has been quoted as saying the six films are the story of the tragedy of Darth Vader and how he became evil. It’s amazing that the creator of these stories and this universe seems to have no idea which characters really made the series come to life. Made it hum and buzz with human feeling in the midst of all the special effects. That humanity has been recaptured in Episode VII, both with the old characters and the new.

The first time I read the Pauline Kael quote above I immediately thought of Lucas. How he took something that in the original trilogy was fun and popcorn—a bricolage of Buck Rogers, samurai films, screwball comedy, Westerns and teen exploitation films, with a sprinkling of Joseph Campbell’s mythos—and tried to cast it in classical marble for the second trilogy. J.J. Abrams succeeded in this film by bringing back the fun and popcorn—albeit through making a pastiche of the pastiche, retelling the much of the original Star Wars with a next-generation cast.

Ryan Parker: I think I enjoyed The Force Awakens more on my second viewing of it. Great casting and performances elevate beyond Episodes I, II, and III and places it alongside A New Hope as, perhaps, my favorite film in the franchise. And it is so because the two films are so similar, but don’t you dare bring that up to the fanboys. What’s been just as entertaining as the film (well, almost) are the conversations around it. As if saying that the film is a re-tread of the originals is an insult. From both a creative and a marketing/business perspective, Abrams et al had to do this. The reason that the fanboys (and girls) are falling in love with The Force Awakens is that it reminds them so much of the original. The reason that it is (or will) bring on whole new generations of Star Wars fans is, because, like the original, it doesn’t take itself too seriously, carries you along on a wild–if narratively loose–ride. It’s great fun, but don’t scratch the surface or you’ll likely be disappointed.

RL: I think you get at one of the major reasons the movie works so well when you mention the acting. This is by far the best-acted of the Star Wars films. We know we’re in good hands when the film starts with Max Von Sydow, who evokes the Alec Guinness stage sage. John Boyega makes a good reluctant hero as Finn the escaped storm trooper. We can only hope his bromance with Oscar Isaacs blossoms in the coming sequels. Daisy Ridley is the kick-ass girl hero this series has been awaiting for almost forty years. The villains General Hux (Domnhall Gleeson) and Kylo Ren (Adam Driver) are some of the most three-dimensional this series has seen. I like that there seems to be a real rivalry between Ren and Hux, that Hux isn’t just another minion for Ren to Force-choke. I thought Adam Driver was an fascinating choice for Ren, a kind of “beautiful/ugly” character, uncertain of his commitment to evil. His mopeyness has spawned an awesome Twitter meme, “Emo Kylo Ren.” (@KyloR3n: “What’s the word for when your father is frozen in carbonite but emotionally for your whole childhood.”) Speaking of thawing out Han, what did you think of his “conversion” to the Force as people are calling it?

RP: It’s a nice addition to the series and adds depth to the character, but how could he not finally “believe,” after all he’d seen. But he “converts” only to watch his son transition to the dark side.
Speaking of, what did you make of Kylo Ren’s obsession with Darth Vader? Isn’t his whole “religious fervor” fueled by a misunderstanding of who and what Vader was? He wants to kill the very man that Vader gave his life to protect. I may be wrong, but this opens up some striking real world parallels.
RL: There’s certainly a parallel to the fundamentalism–often preying on the vulnerability of sensitive and searching youth–that continues to haunt religions today, including Christianity and Islam. As I’ve written about previously, what religious figures actually stand for is often mis-remembered or passed on incorrectly by clergy and hierarchy. Clearly Kylo Ren was never told about, or refused to believe, the story of Vader’s final turn to the Light Side.

I’ve often thought Vader represented a certain morality even in the midst of the Empire, as he insisted on using the power of the Force instead of the bureaucratic and technological forms of torture and death the militaristic Imperials dished out. Individuals who have “gone to the Dark Side” can be converted, but bureaucracy and technology have no soul and therefore cannot be saved. The Nazi-like rally led by General Hux and the technical monstrosity of the Starkiller Base seem to demonstrate a form of evil infinitely more dangerous than Kylo Ren.

Just to “scratch the surface” a bit, even though you warned against it, what do you think Abrams and crew got right about this film, and what did they get wrong? And do you have any speculation as to where the series will go from here? 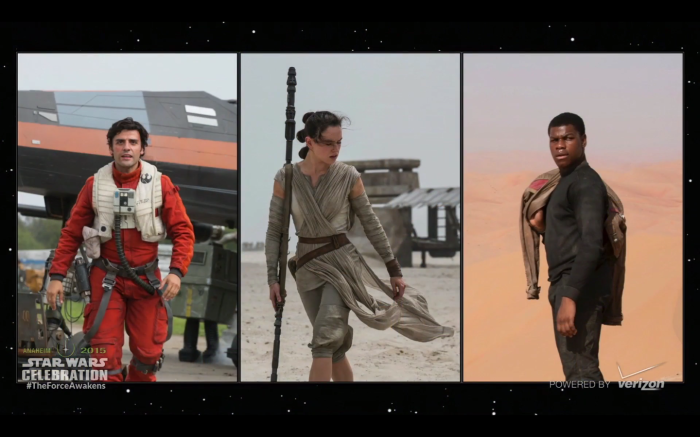 RP: Despite my minor criticisms, they didn’t really get anything wrong. I think they got nearly everything right from the balance of nostalgia and the new to the production design and the special effects. But, most importantly, they nailed the casting, which is crucial in any film, but perhaps more importantly in a film like this. Wherever it goes Daisy Ridley and John Boyega and Oscar Isaac all better be significant players. I don’t know that I have specific thoughts about where this is all going, although I gather you do??
One of the other things I’m interested in are all the other films planned to release over the next five years, like Rogue One and the Han Solo and Boba Fett films.
RL: Another of the elements I thought they got right, in addition to the casting, was the location scouting. This seemed to have been an idea abandoned by Lucas in the prequels as he conjured complete worlds out of CGI with no reference to anything that looked like a planet we could recognize. The worlds where The Force Awakens takes place looked like real places we could visit.I suspect what this film comes down to is a really brilliant reboot of the series–a remake without being a remake. I look forward to seeing what this creative team can show us that’s both novel and fits within the Star Wars universe next time.But I don’t think we can underestimate–as captured in the scene on the Millennium Falcon — the reintroduction to the power of the Force to the next generation. They should be able to have access to the same wonder and awe for mythopoetic spirituality that shaped us.